Yelp Camp? What the heck is that?

And if you’ve heard of Udemy.com, you’ve probably heard of The Web Developer Bootcamp by Colt Steele.

Love it or hate it, The Web Developer Bootcamp has helped kick start thousands of web developer careers.

And there’s an interesting little project inside this course that just might be the greatest web development project of all time.

I’m going to share four reasons why I personally think it’s the greatest web development project of all time.

A bold proclamation, no doubt!

The Web Developer Bootcamp is a video-based course on Udemy designed for complete beginners.

It has well over 600,000 students and clocks in at a soul-sucking 63 hours of on-demand video.

The idea is that this is the exact curriculum you’d get in a real-life coding bootcamp:

The only difference is, with this Udemy course you’re by yourself while debugging your drum machine app. Also, there isn’t a communal pantry filled with vegan cupcakes and LaCroix Pamplemousse fizzy water.

Most people I know who bought this course do not finish it. Including myself… I got about 60% done before I hopped onto other courses. I’ve met exactly one person over the years who has cranked this thing out.

And let’s face it, even with cute cat pics and dad jokes some of this stuff can be really freaking dry and demotivating.

Now mind you – there are other bootcamp courses on this site for ten bucks. Some of them are very good.

But this is the original. And it recently got updated (for example, there’s now ES6 but no more jQuery) so it’s experiencing a bit of a renaissance.

The capstone project in this course is called Yelp Camp. 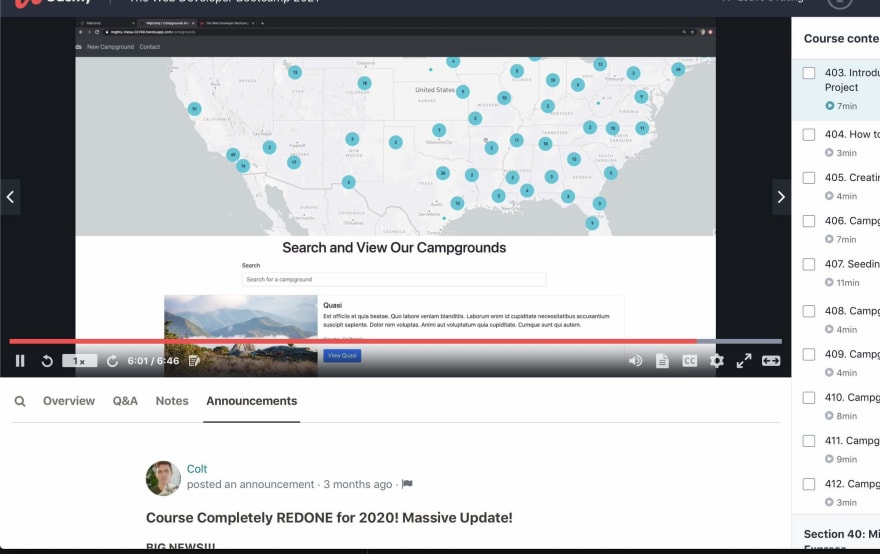 It's basically a Yelp clone, but with campgrounds. You start working on it about halfway through the course.

Before that you’re learning HTML, CSS, lots of CSS, JavaScript basics – even some OOP with JavaScript.

You get some terminal practice, and you’re introduced to Node and NPM.

You also build some servers with Express, start exploring MongoDB…And then the YelpCamp bomb drops.

This right here, IMHO, is reason #1 why this is the greatest web development project of all time.

The build up is so methodical. You’re spending a few weeks or even a couple of months learning about web development, learning the basics of programming, before you even hear the whispers of this project.

And so developers are already getting a taste of the build process before they even start with Yelp Camp.

And by the time they get to it, it’s not this Oh Mah God! moment where you have no idea what’s happening – you’ve already had hundreds of hours of practice.

Remember, this course is 62 video hours.

There are lots of videos here that you’ll probably watch a few times. A lot of your time is going to be spent with the video paused while you set up your developer environment, while you practice – that kind of stuff.

So by the time you hit this project, you’ve gone through weeks or months of training and rather than a complete shock, this project is largely a natural progression from the stuff you’ve learned and built previously in the course.

Reason #2 I think Yelp Camp is best – is that this is just a CRUD app. 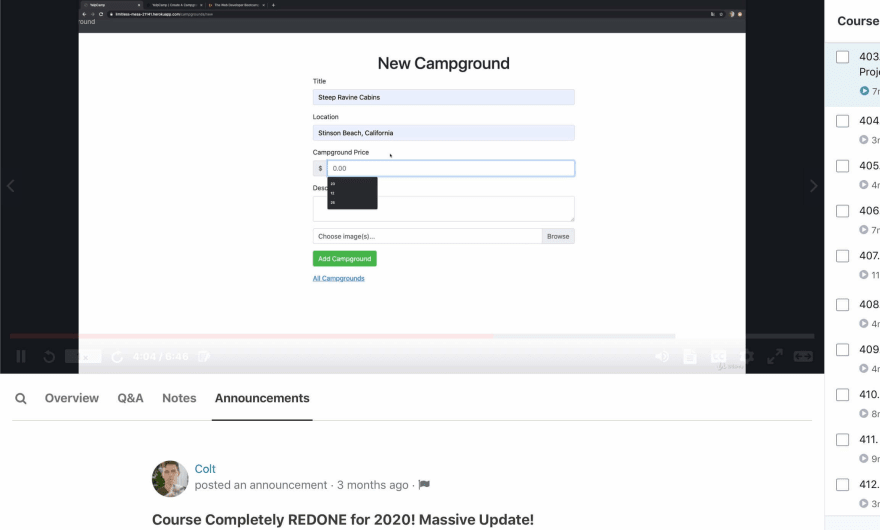 The idea of this app is not really mind-blowing, but at the same time it’s a novel idea.

You’re building a full-stack, fully functional web application where people can submit campgrounds and users can review them.

And I know with these courses one of the challenges is to bring some cool projects to the table.

Nobody wants to learn how to create todo apps for four months of their life.

So there’s a temptation a lot of times to get ridiculous with it like, in this course you’re going to build an alien abduction zapper that also makes toast!

This project is not like that. It’s a plain ol’ CRUD app, but it’s also interesting and relatable because we’re all familiar with review sites.

We’re all familiar with logging in to leave a review.

But then you’re challenged to actually build it with all this functionality that’s expected in a real-world version of this project.

With numbers like these (i..e. well over 600,000 students enrolled), there is somebody out there right at this moment with the same issues you’re having with this project. 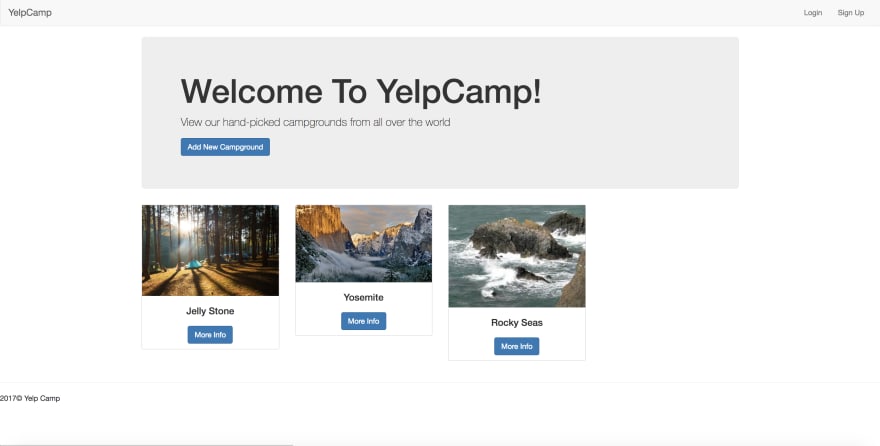 There’s an official Discord, there's an official Facebook group, heck - by popular demand I even started a channel on my own Discord server for this course!

There are GitHub repos where you can check out how other people went about building the project.

Even developers who aren’t familiar with this course or this project are oftentimes able to help you and keep you motivated.

Finally reason #4 I think Yelp Camp just might be the greatest web development project of all time?

And this is where things start really getting interesting.

This whole Yelp Camp thing – the idea of a campground review site – it’s just a skin. You can do any theme. For example:

You can review dogs.

Seriously, it can be whatever you want.

And then you can switch out technologies, too.

As another example, I think MongoDB is one of the most overhyped technologies in recent memory (at least when it comes to web developer courses).

But you can dump it and slap on MySQL or PostgreSQL or MariaDB or what the heck ever.

I mean, you’re not reallllyyyyy slapping it on, but you know what I mean. Be gentle – you don’t want to drop the columns!

But in the context of picking up developer skills?

In the context of developing those problem solving skills?

Going out on your own to customize any project is where so much real learning comes in:

The exploration, the curiosity, the questioning and experimentation.

The more you get away from these videos, the better. Because any time you’re watching a video, you’re being fed somebody else’s problem solving process.

Now this isn’t always a bad thing. You’ve got to start somewhere – but it’s important to put whatever video it is on pause and venture into the unknown. 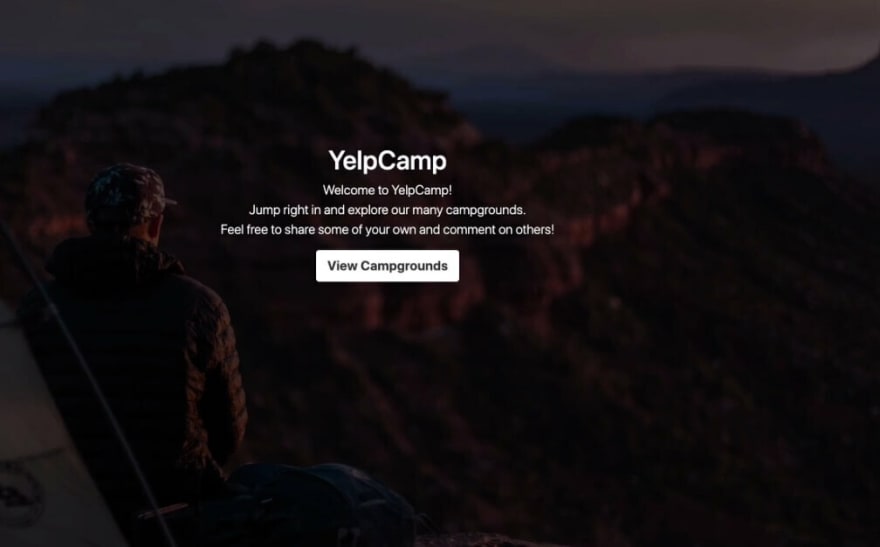 The worst you can do is break something that’s usually fixable! Just make sure you’re using version control.

But when you pause a video and say:

Wait, what happens if I try using a new JavaScript thing I learned today? What happens if I bust out some OOP and start working with inheritance and constructor functions?

You don’t have to take this course to build this project. The code is all over GitHub, for example, if you want to take a crack at it.

And even though I’ve been detailing the virtues of Yelp Camp in this video, this project is not going to automatically make you a job-ready developer.

It’s not going to automatically make you a junior developer.

CRUD apps really get to the heart of software development, plus they’re fun to design and build and customize.

When something is fun it just makes it so much easier to feel motivated when learning web development.

What do you all think: is Yelp Camp* the greatest web development project of all time, or am I inhaling too many Node fumes?

Ready to revamp your own developer portfolio?

Want to increase your chance of callbacks, interviews and job offers? Check out the course PORTFOLIO SURGERY. You'll learn 5 proven methods for making your portfolio pop. 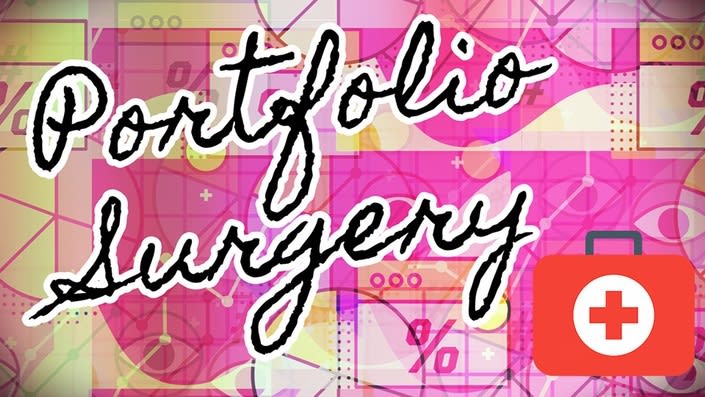 Recent student feedback: This was a great course! the 5 methods made alot of sense as to what to do! I would not give it 5 stars, I WOULD [GIVE] THIS COURSE 6 STARS!!!!!!

Use code PORTFOLIO at checkout to snag it for $20 (75% off original price!)! This is deal is limited time only and available to the first 20 students. Get it here: https://realtoughcandy.io/p/portfolio-surgery

The post Is Yelp Camp is the greatest web development project of all time? (Colt Steele bootcamp) appeared first on RealToughCandy.

Thanks for keeping DEV Community safe. Here is what you can do to flag realtoughcandy: