During my time leading growth marketing Segment, I remember a handful of engineers spending a few months building a customer dashboard to provide our sales, success, and marketing teams with visibility into product usage, billing, engagement, etc.

This dashboard vastly improved the efficiency of our go-to-market side of the business and was also beautifully designed.

A LOT of work went into shipping just this one of many internal tools we used at Segment. And that type of work is often unnoticed by the public.

To shed some light (and recognition) on the engineering effort that goes into building internal tools, we (Retool) asked more than 650 developers.

Here are the summarized results:

Developers spend more than 30% of their time building internal applications.

That number jumps to 45% for companies with 5000+ employees. And on top of that, 4 out of 5 teams plan to keep or increase this level of investment over the next 12 months.

Why are internal tools and apps so important? And why do developers spend so much time on them?

We surveyed 650 developers and builders (see full PDF report here) and they had one clear goal in mind: making teams across the business more productive.

Note: The insights in this post were gathered from a public survey of 650 developers and technical leaders in Feb-Mar 2021. Check out our PDF report for a deeper breakdown of respondents by industry, country, and role.

The case for internal tools

Great customer experiences are often backed by a lot of hard back office work. What might appear as effortless student loans, corporate cards, or distanced learning frequently includes a lot of manual tasks and repetitive operations to get just right.

Companies build internal applications, also known as internal tools or back office apps, to give every team the tooling they need—from static dashboards to weekly scripts—to keep the business moving. At their best, internal apps help teams work the way they want. At their worst, internal apps consume more resources than they hoped to save. In either case, developers are spending a lot of time on internal apps. 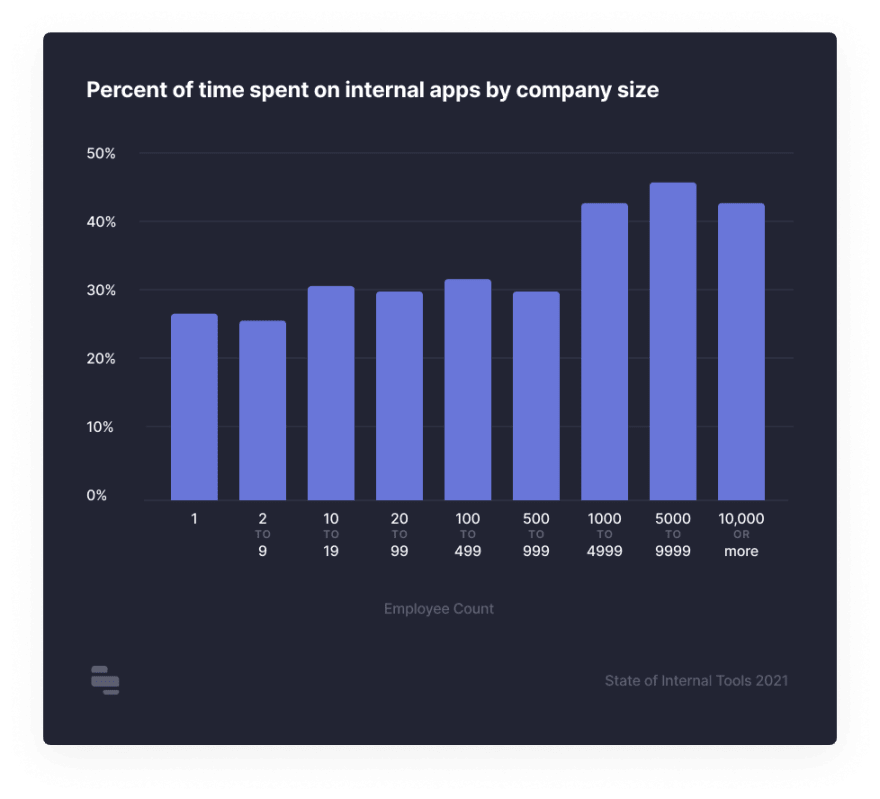 As COVID-19 forced developers to re-evaluate their most important priorities, 87% of developers increased or maintained their time spent on internal apps in response to the pandemic.

And it’s not strictly developer time being invested. More than 57% of companies reported at least one full-time employee dedicated to internal tools. 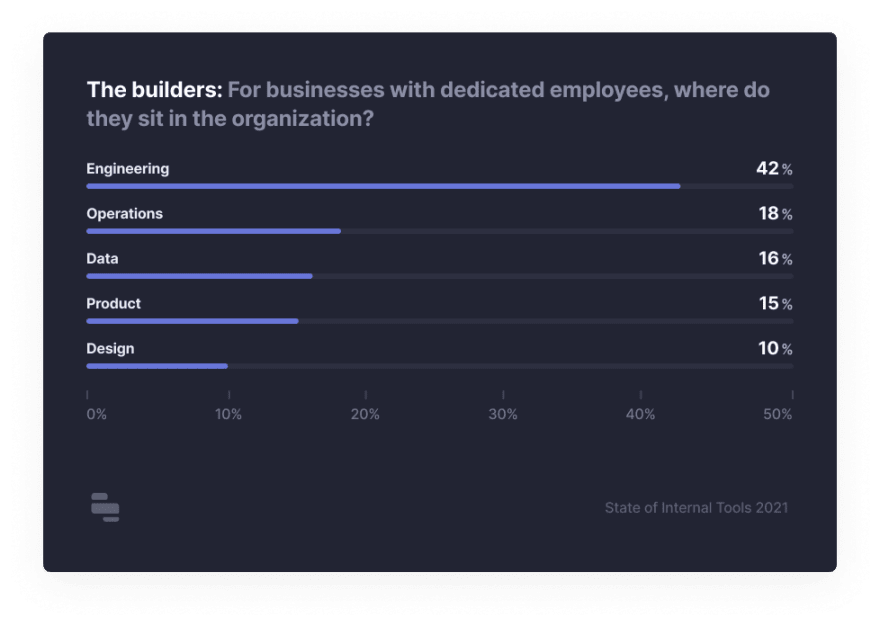 Most of that headcount (42%) ends up being engineers, with some operations, data, product, and design folks, too. As companies grow, that overall investment in internal tools also grows. 77% of companies with 500+ employees have dedicated teams for building and maintaining internal apps. 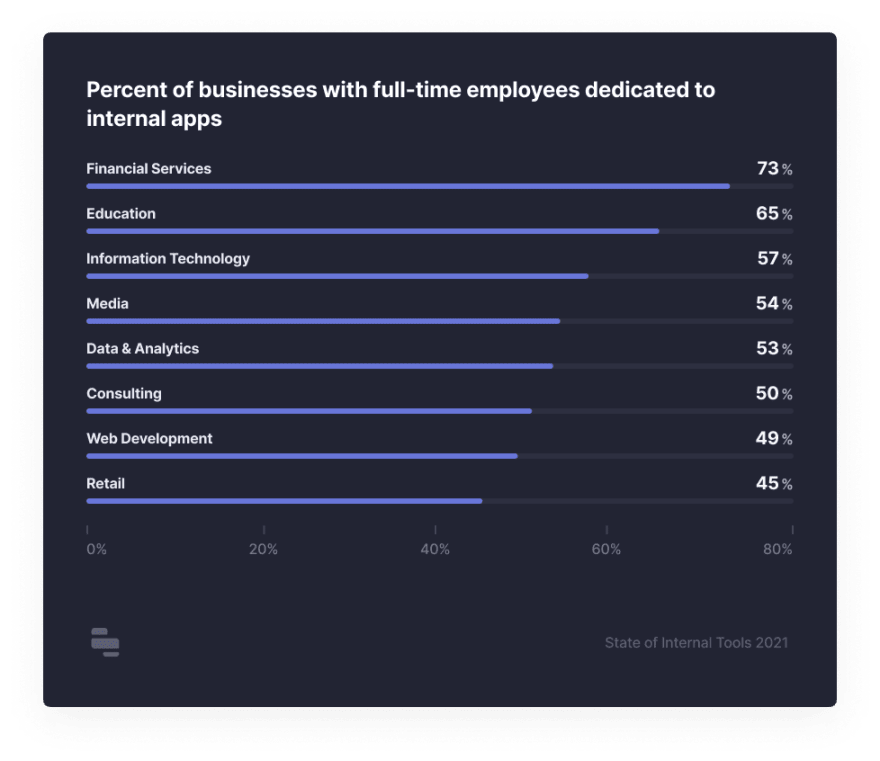 Working in finance often includes sensitive financial data and rigorous manual processes, a recipe that can lead these companies to prefer internal apps over pre-built SaaS (especially in the cloud) for better control over data and workflows.

What exactly are they building and why?

Developers build internal apps for both technical and non-technical teams, and most of these apps help manage, edit, share, or use the data most relevant to their function—i.e. CRUD on top of your data sources. 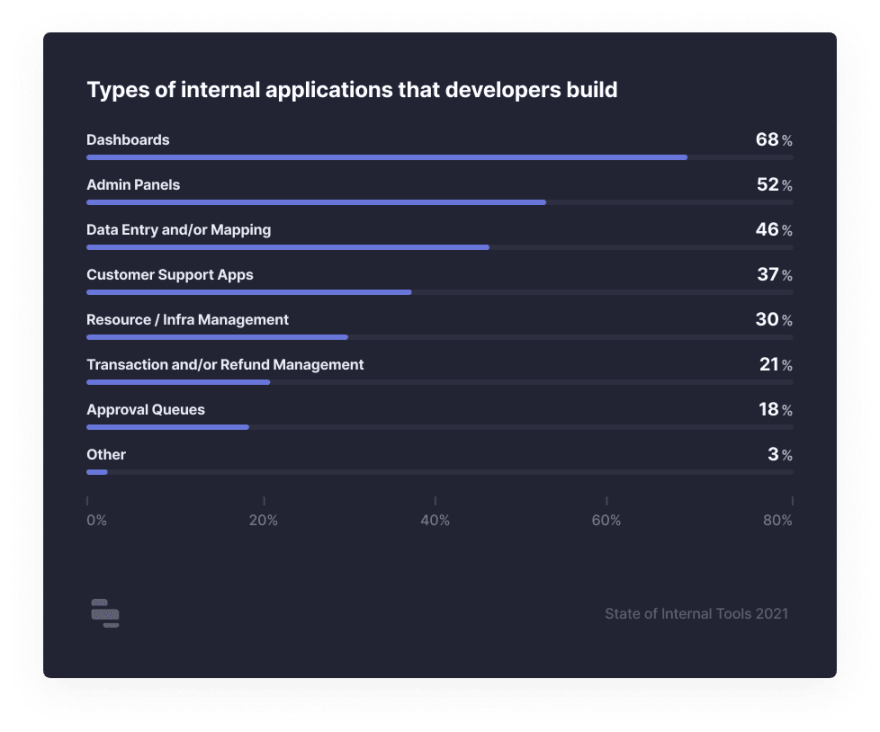 And these internal apps are being created to support several teams. Customer support might need a refund dashboard or an admin panel to update user records in their database. Sales might need a custom CRM for data entry. Engineering might need a PR approval queue connected to GitHub. 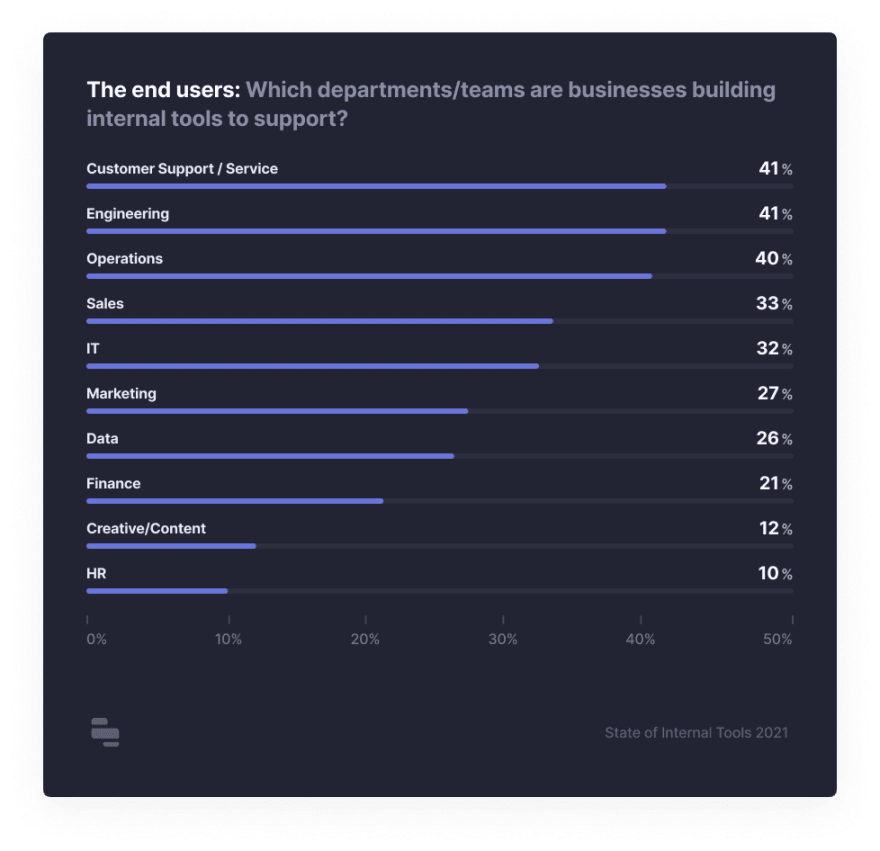 In any case, developers are building a lot of internal apps and, it turns out, they are servicing a large portion of their colleagues. For companies with >10 employees, 1 in 3 employees are using internal apps a developer has built. That’s super impactful!

That high usage bar means that it’s more important than ever to be able to measure how these apps are performing, and what return on investment they’re getting. Our survey shows that when it comes to measuring ROI, developers care most about improving employee productivity (54%), reducing business costs (33%), and increasing employee satisfaction (28%).

All together, these ROI metrics suggest developers want to create leverage across teams. But the top challenges they report—time, impact, ownership—reflect the struggle to find balance. Internal apps need to solve big problems across the company without weighing down the developers who build and maintain them.

The technology choices behind internal apps

No matter the size of the company or the industry, 2 out of 3 developers default to building from scratch, as opposed to using a spreadsheet or a SaaS tool. 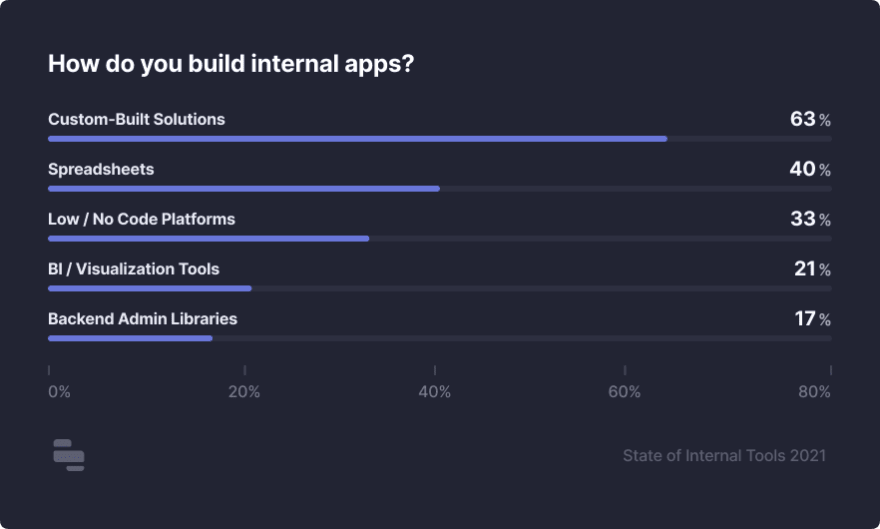 While rolling your own apps (React, Django, etc.) gives developers flexibility and complete control, it’s the most time consuming and resource intensive (obviously). And given that 55% of developers struggle to find the time to build internal apps in the first place, it’s no surprise that custom-built tooling is not the most loved option available. 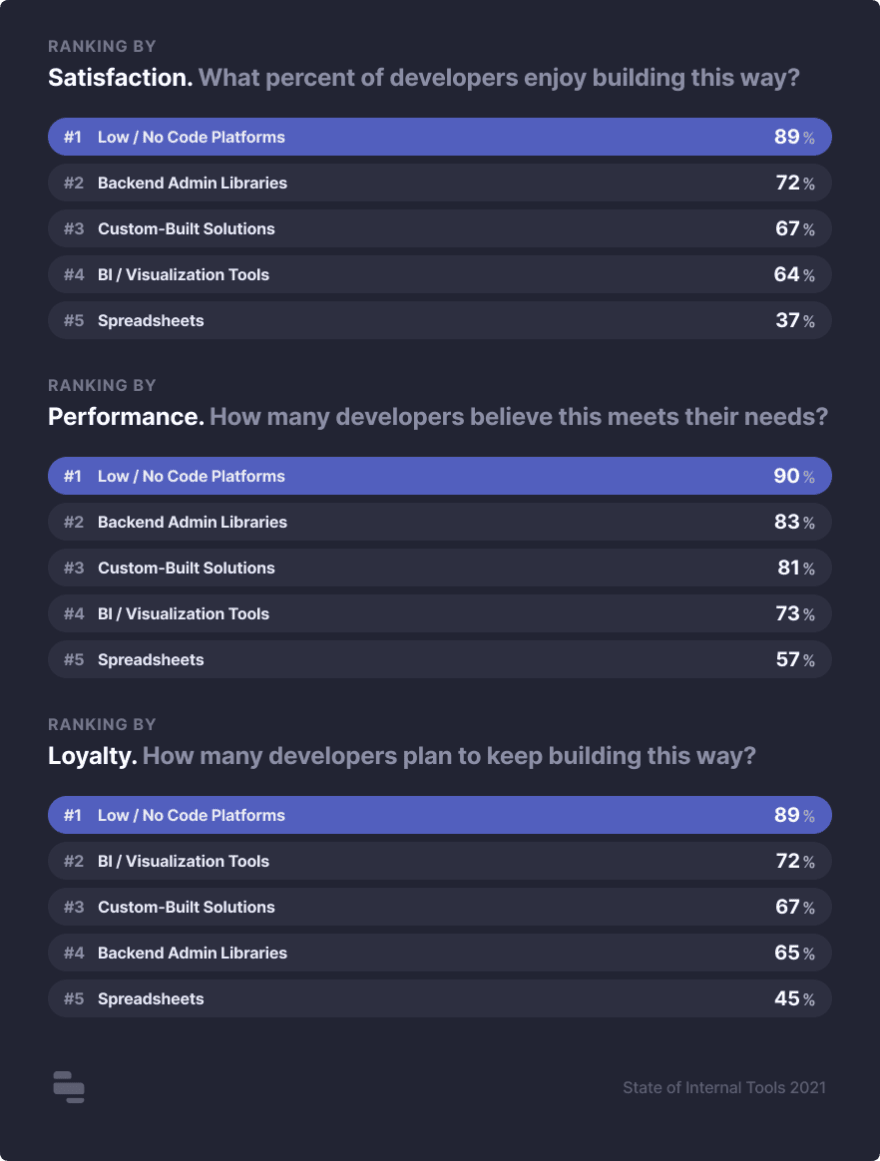 This is where low and no-code apps come in. These platforms can give developers the flexibility of something home-grown, but without the setup and infrastructure costs that take time and effort. Developers who use low/no code platforms report being more satisfied, successful, and loyal when compared to developers who chose any other technology option for building internal apps.

And while only 38% of developers surveyed actually use low/no code, the large majority (88%) of those that built internal apps using low/no code plan to keep building this way in the future. 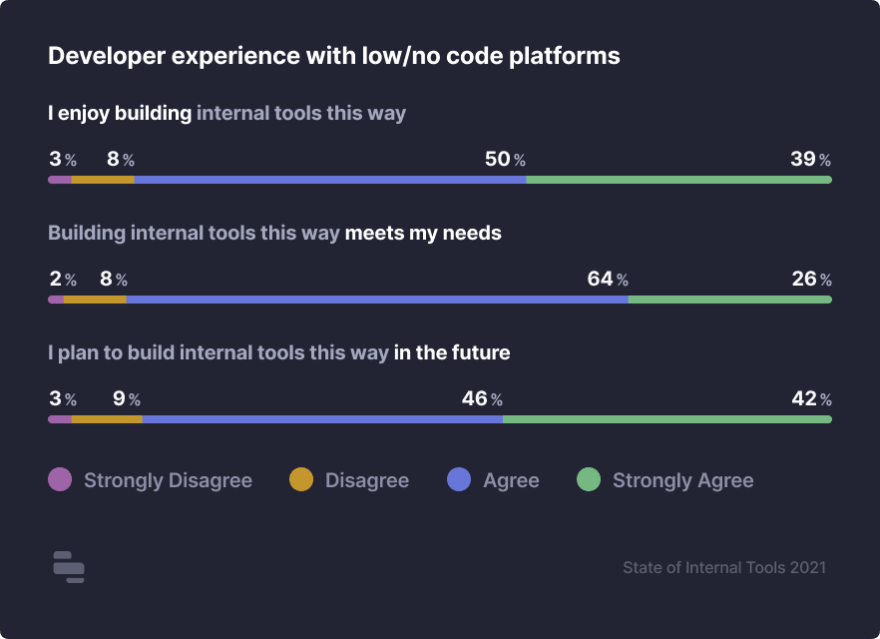 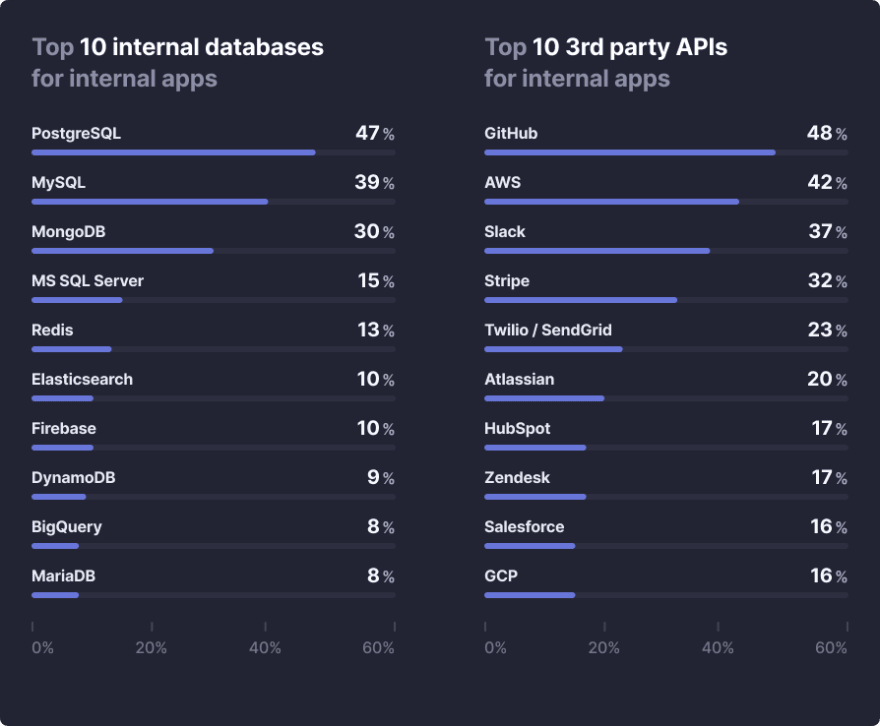 This deep integration across a variety of data sources is one of the main benefits of internal apps. By helping teams design how data comes together, developers are helping each team break from tool-centric approaches to actually work the way they want to work.

And as developers at every company continue to build and maintain more and more for internal apps, only time will tell what new technology preferences—and challenges—arise.

If you’re interested in seeing a more detailed breakdown of trends and technology preferences, get the full report here. And, if you're interested in building internal tools, checkout Retool here.

Retool
Retool is a fast way to build internal tools.

Build great internal tools in half the time

Once suspended, retool will not be able to comment or publish posts until their suspension is removed.

Once unsuspended, retool will be able to comment and publish posts again.

Once unpublished, all posts by retool will become hidden and only accessible to themselves.

If retool is not suspended, they can still re-publish their posts from their dashboard.

Once unpublished, this post will become invisible to the public and only accessible to kevbosaurus.

Thanks for keeping DEV Community 👩‍💻👨‍💻 safe. Here is what you can do to flag retool:

Unflagging retool will restore default visibility to their posts.