Topological sort is an ordering of the vertices of a directed acyclic graph, in a way that if there is an edge from a vertex A to B, then A comes before B. For example, let's say there is a set of projects and some of them depend on other projects: 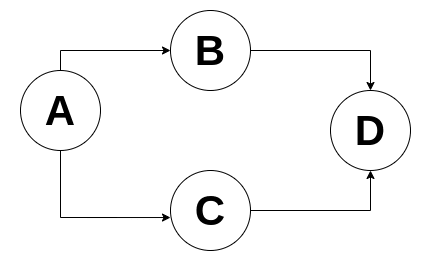 Note that we start from node A because it doesn't have dependencies and repeat it, that is after A is done, B and C haven't dependencies anymore, so we can choose either one to be the next. That's why this algorithm works only on acyclic graphs.

We can use a modified depth-first search for this algorithm, here I talk more about DPS. The steps are the following:

1 - For every unvisited node visit it and its adjacent nodes (DPS)
2 - After visiting a node and its adjacent add it at the beginning of a list (you can use a stack instead), this list will be in the topological order.

There are other problems that topological sorting can resolve, like the order that courses have to be selected during college, since they may have other courses as a prerequisite. Or even the order of steps of a recipe, in which some must be taken before others.

There are a lot of explanations for this algorithm on the internet, here I tried to explain it in a little different way, I hope this helped you to make sense of it or if you haven't heard about topological sorting before, at least this may be an introduction of it.

Path Aliases in TypeScript and why you should use them

How to Build a Custom Calendar/Date picker Component in React

Once suspended, ricardo_borges will not be able to comment or publish posts until their suspension is removed.

Once unsuspended, ricardo_borges will be able to comment and publish posts again.

Once unpublished, all posts by ricardo_borges will become hidden and only accessible to themselves.

If ricardo_borges is not suspended, they can still re-publish their posts from their dashboard.

Once unpublished, this post will become invisible to the public and only accessible to Ricardo Borges.

Thanks for keeping DEV Community 👩‍💻👨‍💻 safe. Here is what you can do to flag ricardo_borges:

Unflagging ricardo_borges will restore default visibility to their posts.