Containers are so awesome.

Prior to containers, if you wanted to experiment with some new technology, you had to go through the ringer to configure and install all of the appropriate dependencies, set up the proper infrastructure, and clutter your machine with tons of trash that you might not ever care to use in the future. Thankfully, Docker and other containerized technologies came along and empowered developers to just throw a one-liner into the command line and like magic, the entire world appeared in a magical little box.

Several days ago, I had an idea in my head so I scrounged around through Docker Hub looking for the perfect container that had everything that I wanted in it. I'd pull down one, tinker a bit, and throw it away. Pull another down, try something else, and then eventually throw it away. Pull yet another one down and ... crap!

No space left on my device? That's odd, maybe it's the hours upon hours of videos that I've downloaded for my kids to watch on road trips, or all those computer games that I've installed but never can find the time to play (some day)? Let me check out the hard-drive and see how that looks: 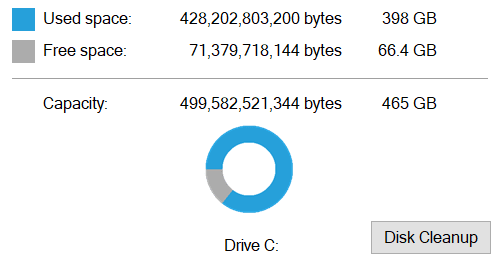 Okay, so either this image that I'm pulling down is really big, or something else is going on. After a bit of mulling it over, I realized that like all good humans that don't want the machines taking over, delegated a specific amount of space and resources that Docker could take advantage and sure enough, I was right at the threshold.

It was time to take out the trash, however since docker dump trash isn't a legitimate command (at least out of the box), I just had to do a quick prune:

The prune command in a nutshell does the following:

Since I mentioned above that I really enjoy playing with containers, I figured that we'd just do it live, so here's what that looked like on my local machine:

With three little words, I managed to free up nearly 126GB of unused space across 22 containers, 5 networks, and 45 images). That's quite impressive, but more importantly, I was then able to immediately install the image that I was trying to in the first place.

So the moral of the story is this - containers are really awesome, powerful, and useful to the modern developer, but if you aren't mindful, those unused ones can quickly turn from containers to trashcans that can make your development environment a stinky place to work in.

Make VSCode Home With These Extensions

I tried Mac for a Week, You'll Never Believe What Happened...

Once suspended, rionmonster will not be able to comment or publish posts until their suspension is removed.

Once unsuspended, rionmonster will be able to comment and publish posts again.

Once unpublished, all posts by rionmonster will become hidden and only accessible to themselves.

If rionmonster is not suspended, they can still re-publish their posts from their dashboard.