The source is hosted on GitHub: https://github.com/idom-team/idom

IDOM takes inspiration from React, and wherever possible, attempts to achieve parity with the features it copies more directly. Nowhere is this more evident than the version of React's often lauded "Hooks" that IDOM implements in Python.

At a glance, the similarities between IDOM and React are rather striking. Below is a React component which defines a simple Counter displaying the number of times a button has been clicked:

And this is the same component implemented in Python using IDOM:

Which, when displayed in your browser, should look something like this:

Why Do We Need IDOM?

Over the past 5 years front-end developers seem to have concluded that programs written with a declarative style or framework tend to be easier to understand and maintain than those done imperatively. Put more simply, mutable state in programs can quickly lead to unsustainable complexity. This trend is largely evidenced by the rise of Javascript frameworks like Vue and React which describe the logic of computations without explicitly stating their control flow. 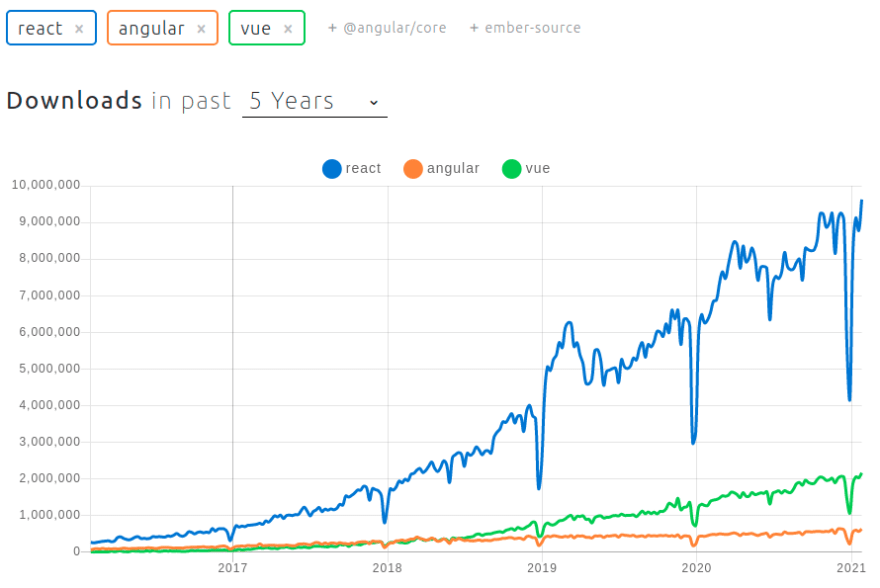 So what does this have to do with Python and IDOM? Well, because browsers are the de facto "operating system of the internet", even back-end languages like Python have had to figure out clever ways to integrate with them. While standard REST APIs are well suited to applications built using HTML templates, modern browser users expect a higher degree of interactivity than this alone can achieve.

A variety of Python packages have since been created to help solve this problem:

However they each have drawbacks that can make them difficult to use.

A future article will address specific comparisons to each of the projects mentioned above, but for now, we'll just focus on IDOM and its solutions to these problems.

IDOM has a flexible set of core abstractions that allow it to interface with its peers. At the time of writing, both Jupyter and Dash are supported, while Streamlit and Bokeh are in the works:

By providing well defined interfaces and straighforward protocols, IDOM makes it easy to swap out any part of the stack with an alternate implementation if you want to. For example, if you need a different web server for your application, IDOM already has 3 options to choose from or, use as blueprints to create your own:

You can even target your usage of IDOM in your production-grade applications with IDOM's Javascript React client library](https://www.npmjs.com/package/idom-client-react). Just install it in your front-end app and connect to a back-end websocket that's serving up IDOM models. IDOM's own documentation acts as a prime example for this targeted usage - most of the page is static HTML, but embedded in it are interactive examples that feature live views being served from a web socket:

IDOM, by adopting the hook design pattern from React, inherits many of its aesthetic and functional characteristics. For those unfamiliar with hooks, user interfaces are composed of basic HTML elements that are constructed and returned by special functions called "components". Then, through the magic of hooks, those component functions can be made to have state. Consider the component below which displays a basic representation of an AND-gate:

Here's a very high level summary of how it works... the first time a view of the component above is rendered, the AndGate function is called where its initial state for input_1 and input_2 is False. The function then returns a series of HTML elements with callbacks that respond to client-side events. Machinery behind the scenes subsequently realizes that declaration and displays two checkbox buttons with the text False AND False = False. Later, when a user clicks the now visible checkbox buttons, client-side events are triggered, the associated callbacks respond by inverting the old state from False to True, and a re-render of the component is scheduled. When re-rendering, the function is again called, this time though, where input_1 and input_2 have been updated to reflect the new state, thus causing the displayed text to change.

In the code above, consider the fact that it never explicitely describes how to evolve the frontend view when events occur. Instead, it declares that, given a particular state, this is how the view should look. It's then IDOM's responsibility to figure out how to bring that declaration into being. This behavior of defining outcomes without stating the means by which to achieve them is what makes components in IDOM and React "declarative". For comparison, a hypothetical, and a more imperative approach to defining the same interface might look similar to the following:

In this imperative incarnation there are several disadvantages:

To communicate between their back-end Python servers and Javascript clients, IDOM's peers take an approach that aligns fairly closely with the Model-View-Controller design pattern - the controller lives server-side (though not always), the model is what's synchronized between the server and client, and the view is run client-side in Javascript. To draw it out might look something like this: 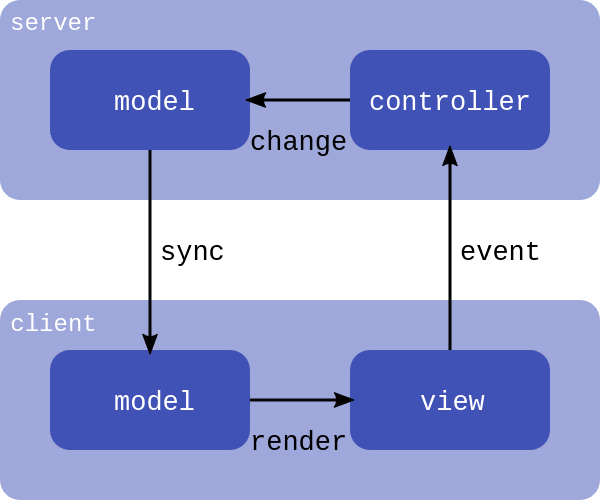 By contrast, IDOM uses something called a Virtual Document Object Model (VDOM) to construct a representation of the view. The VDOM is constructed on the Python side by components then, as it evolves, IDOM's layout computes VDOM-diffs and wires them to its Javascript client where it is ultimately displayed: 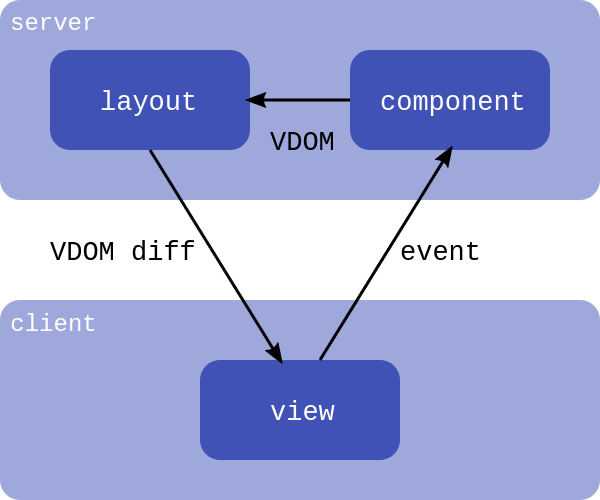 This process, in addition to drastically reducing complexity, means that Python developers with just a little bit of HTML and CSS knowledge can easily create elabortate interfaces because they have complete control over the view. Of course many users probably don't care about the details and just want high level components, but for those who do, it's easy to distribute their creations for others to use in Python packages.

If you're thinking critically about IDOM's use of a virtual DOM, you may have thought...

Isn't wiring a virtual representation of the view to the client, even if its diffed, expensive?

And yes, while the performance of IDOM is sufficient for most use cases, there are inevitably scenarios where this could be an issue. Thankfully though, just like its peers, IDOM makes it possible to seemlesly integrate Javascript components. They can be custom built for your use case, or you can just leverage the existing Javascript ecosystem without any extra work:

Building highly interactive web applications as a Python developer has historically been a great challenge. However IDOM changes that. Knowing just basic HTML, CSS, and Python, you can make everything from slideshows to dashboards and use it wherever you need it, whether that's in a Jupyter Notebook or an existing web application.

To learn more check out:

How To Bypass Or Solve A Captcha With JavaScript & 2Captcha

Once suspended, rmorshea will not be able to comment or publish posts until their suspension is removed.

Once unsuspended, rmorshea will be able to comment and publish posts again.

Once unpublished, all posts by rmorshea will become hidden and only accessible to themselves.

If rmorshea is not suspended, they can still re-publish their posts from their dashboard.