Check it out on Github.

This started out as one of my weekend side hustles and was initially meant to be launched as a paid SAAS. But, on
researching more about the privacy concerns, Instagrams restrictive APIs and mixed results from the initial tests I
decided to scrap the idea and just Open Source it instead.

Here comes the tricky part, now grab your pair of debugging goggles and start digging around the various property of the data_groomer object for something useful. I am just waaay to burnt out to add graphs and UI
to this now.

With Rumaro, I tried to identify what really made photos special! 🦄

I hypothesized that - Photos which the user liked, i.e photos which were more desirable could be identified using AI
models and the key features which made them special could be thus identified.

I thought the Racy-ness, Body Pose and
Apparel could be easily identified using Deep Learning and these would be the only features which would be driving the
social media engagement.

All the Instagram posts of a user to be analyzed would be downloaded, then these would be sent to several deep learning models
to generate insights from them, to know what makes them special. 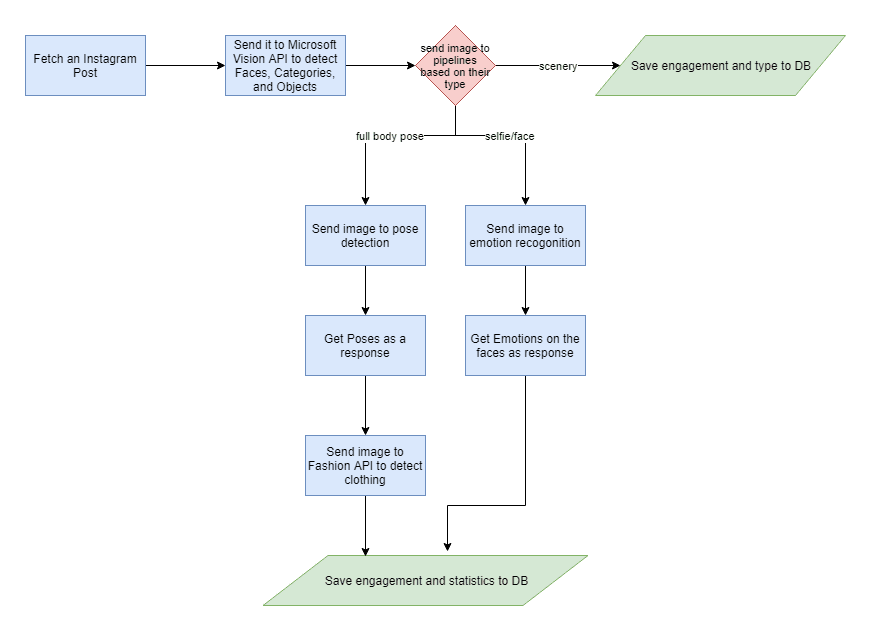 Yes! I even started an Instagram Page and tried to find a target audience - influencers, who were actually willing
to pay to use the product

The vision was to create a massive SAAS Company who charged people ~10$ for reviewing a profile.
I imagined it would have been possible to create a sustainable business out of this.

I had a vision that the insights generated would be so useful that it would allow users to boost their social media profiles
significantly, and I imagined that the Deep Learning Models would be super-accurate and would predict everything as real humans perceive it.

How far ahead did I actually get?

I decided that it only made sense to publish the stripped-down version of the entire codebase, without the Web Framework
code and Flask packages.

The generated Report after analyzing a random Instagram account.
Yes, I had to censor all of the images, yeah, that kinda' defeats the whole purpose of the screenshots 🤷🏽‍♂️

⚓ Jumping off the sinking ship...

Unfortunately, as I moved forward with the project I discovered that the correlation between the different features
and the engagement was very weak. Also, this project had nightmarish privacy concerns which made it extremely difficult
to monetize and market.

In retrospect, it seems really obvious that the plan was a bit flawed from the square one.
🤷🏽‍♂️

Ehh... I did get to play around with a lot of Deep Learning APIs, so all was good.

Reach out to me!

If you are interested to build something similar yourself or would like help getting this up and running or if you are
planning to turn this into a movie!!! Hit me up on Google Hangouts at rohansawantct83@gmail.com

Rohan Sawant
Hi! I'm Rohan, a Full Stack Software Engineer, with a background of working with Deep Learning and AI, who loves to use his skills to create products that are at the intersection of all of these!
How to connect to DynamoDB with Python using Docker Compose? | Boilerplate, Starter Pack 🐳
#python #docker #aws #devops
I built an (almost) Decentralized Facial Recognition System with Raspberry Pi Zeros! - FRAS
#python #deeplearning #machinelearning #raspberrypi

Once suspended, rohansawant will not be able to comment or publish posts until their suspension is removed.

Once unsuspended, rohansawant will be able to comment and publish posts again.

Once unpublished, all posts by rohansawant will become hidden and only accessible to themselves.

If rohansawant is not suspended, they can still re-publish their posts from their dashboard.

Once unpublished, this post will become invisible to the public and only accessible to Rohan Sawant.

Thanks for keeping DEV Community 👩‍💻👨‍💻 safe. Here is what you can do to flag rohansawant:

Unflagging rohansawant will restore default visibility to their posts.