Update: I recently wrote a post on different use cases of serverless. A list of 10 serverless use-cases which is a good introduction to the areas in which serverless can be useful. Though the article is AWS focused, these ideas can obviously be used elsewhere.

As a huge promotor of serverless, I am very positive about its future. But I feel bad when this technology is falsely lauded as a panacea for all the future applications.

2010:
AWS: Cloud is real
Other vendors: Lol, bookseller, real money is in virtualisation

2017:
AWS: Serverless is real
Other vendors: Lol, real money is in Containers

A discussion on the drawbacks of this technology will give new developers and cloud architects a complete picture.

Serverless architectures refer to applications that significantly depend on third-party services (knows as Backend as a Service or “BaaS”) or on custom code that’s run in ephemeral containers (Function as a Service or “FaaS”), the best-known vendor host of which currently is AWS Lambda.

Despite the name, it does not actually involve running code without servers. The name “serverless computing” is used because the business or person that owns the system does not have to purchase, rent, or provision servers or virtual machines for the back-end code to run on.

Below are some of the prominent drawbacks in serverless technology

Startups are agile boats, but the decisions you make initially have rippling consequences over time. There is a reason why cloud providers offer $100,000 initial credit to early-stage startups.

Once you make your initial infrastructure on a particular cloud it becomes very difficult to migrate out of it. Vendor control, multitenancy problems, vendor lock-in, and security concerns are some of the problems due to the use of third-party APIs.

The developers are dependent on vendors for debugging and monitoring tools. Debugging distributed systems is difficult and usually requires access to a significant amount of relevant metrics to identify the root cause. But recently many tools have come up in the serverless ecosystem for -
Monitoring - Epsagon, IOpipe, Dashbird, Stackery
Security - PureSec, Sync, TwistLock

Decisions about how small (granular) the function should be, take the time to assess, implement and test. It gets cumbersome to manage too many functions, and ignoring granularity will end up creating mini-monoliths.

AWS Lambda, for now, limits you to how many concurrent executions you can be running on all your lambdas. The problem here is that this limit is across your whole AWS account. Some organizations use the same AWS account for both production and testing. That means if someone, somewhere in your organization does a new type of load test and starts trying to execute 1,000 concurrent Lambda functions, you’ll accidentally Denial of service (DoS) your production applications.

Problems related to deployment, versioning, and packaging also exist. You may need to deploy a FaaS artifact separately for every function in your entire logical application. It also means you can’t atomically deploy a group of functions. On top of it, there’s no concept of versioned applications so atomic rollback isn’t an option. You may need to turn off whatever event source is triggering the functions, deploy the whole group, and then turn the event source back on.

Architectural components such as serverless databases, frameworks, libraries are not mature and developers don't have a wide range of choices. 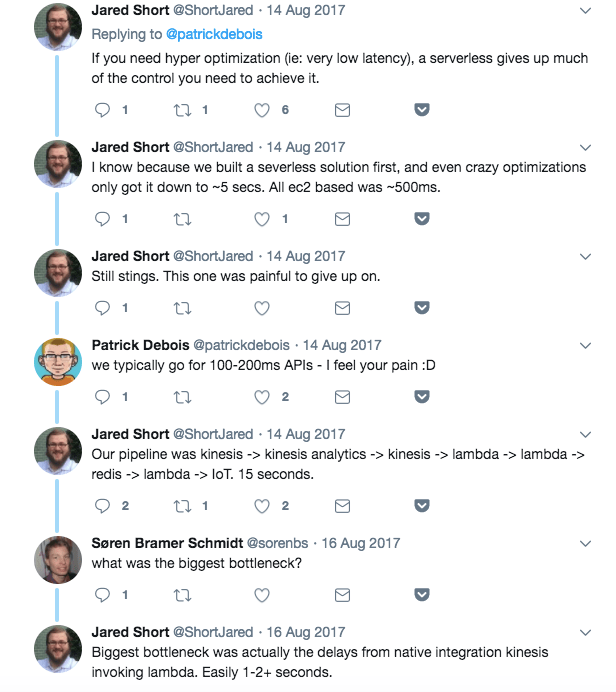 Other drawbacks are performance related issues in functions, security vulnerability (susceptible to DoS attack), event-driven architectural problems such as - snowball effect due to cascading events, asynchronous side-effects, and poison messages.

If there is any other drawback which you want me to discuss, please mention in the comment section. Looking forward to the views of Dev community.

🔒 Next Auth vs SST Auth

Rohit Akiwatkar
Serverless Hustler⚡ Living in a Microservice architecture. Eating f(x) for lunch and 𝝺 for dinner. Sharing my views on emerging technologies.
How feasible is Serverless technology for startups?
#discuss #serverless #aws

Once suspended, rohitakiwatkar will not be able to comment or publish posts until their suspension is removed.

Once unsuspended, rohitakiwatkar will be able to comment and publish posts again.

Once unpublished, all posts by rohitakiwatkar will become hidden and only accessible to themselves.

If rohitakiwatkar is not suspended, they can still re-publish their posts from their dashboard.

Once unpublished, this post will become invisible to the public and only accessible to Rohit Akiwatkar.

Thanks for keeping DEV Community 👩‍💻👨‍💻 safe. Here is what you can do to flag rohitakiwatkar:

Unflagging rohitakiwatkar will restore default visibility to their posts.