Since JavaScript is a weakly-typed language, values can also convert automatically between different types, and it is called implicit type coercion. People who don't understand the quirks of javascript tend to make fun of the language by sharing memes like this. 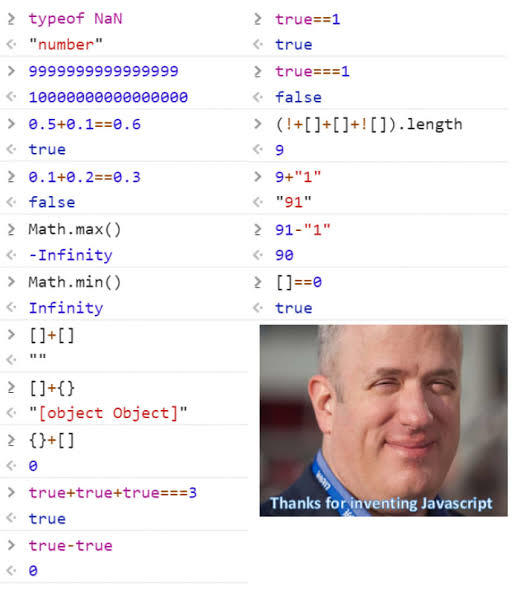 Now in this post, I am going to walk through every example given in this meme and try to explain briefly and try to link references if possible.

While every single example mentioned in this meme would have been a standalone long post, I kept it short to keep it concise and beginner-friendly. Might throw some more light on examples separately in future.

According to the ECMAScript standard, Numbers should be IEEE-754 floating-point data. This includes Infinity, -Infinity, and also NaN.

NaN stands for Not a number.

Let's see when NaN is returned :

Saw anything common?
NaN is returned only when there is a numerical operation.

By definition, NaN is the return value from operations that have an undefined "numerical" result.
So, It is evident that the type of NaN would be a number.

This happens because JavaScript only supports 53-bit integers.
All numbers in JavaScript are floating-point which means that integers are always represented as

The fraction occupies bits 0 to 51, the exponent occupies bits 52 to 62, the sign occupies bit 63.
So js suffers from a loss of precision where the least significant digits disappear if the number is huge.

I have already mentioned it above but gonna repeat it, JavaScript uses a 64-bit floating-point representation according to IEEE 754.
64-bit Binary floating-point format cannot accurately represent a number like 0.1, 0.2 or 0.3 at all. While most of the languages round off the number to give results as expected but JS don't.

If you convert 0.1 to binary representation you would end up with a 0.00011001100110011.... (endless repetition of 0011 ).
This post explains it in detail
In double-precision floating-point (JS), 53 bits are used, so the otherwise infinite representation is rounded to 53 significant bits. So results are always inaccurate in decimal.
This stack overflow answer also explains it very well - https://stackoverflow.com/a/28679423

First Let's make it clear that...
THEY DON'T RETURN LARGEST OR MINIMUM NUMBERS, for those needs we have Number.MAX_VALUE and NUMBER.MIN_VALUE.

Math. max() and Math. min() are static methods that return maximum and min values among the respective arguments.
So according to the spec, if you call them without any arguments, they would return -Inf and +Inf.

While the spec doesn't say anything regarding why it does that, so I looked into the chromium source code to find that out.
To be honest, I found what I was thinking i.e. whenever you call the Math. max() method with a single argument(Math. max(100)), it compares it with -Infinity and returns the Number itself because if it is a valid number, it would always be more significant than -Infinity.
Same goes for Math.min().
So when there is no argument to compare it returns -Infinity as its the max value between nothing and -Inf.

According to the spec, when javascript encounters The Addition Operator ( + ) it performs following steps.

These steps will build foundation for upcoming few examples.

a. Convert both operands to Primitive values
b. If any of the operand is type String then return result as string concatenation
c. Else convert both the Operands to Number using ToNumber()
d. If type of one operand is different from other then throw a TypeError
e Else return the mathematical sum

So lets walkthrough our example :

a. First operands are first converted to their primitive values if they are not, which in this case are not primitive .

b. Now the ToPrimitive converts the object type to a primitive type. Along with the input, ToPrimitive also accepts an optional "Preferred type" parameter which is provided to give ToPrimitive a hint of the type.

c. After converting to the primitives if any of the primitive is of type string,then string concatenation takes place which in this case is true (explained below) and we see a "" as a result.

Adding to the explaination above, {}.toString is [object Object] so by string concatenation we get this result.

Now this example would return the same result as [] +{}.

But does that mean the meme has a typo?

NO, but If you try that example in the console of chrome or firefox it would return 0.
This is becaus Object literal in starting is treated as an empty code block and is ignored by interpreter and we are left with this
expression " + [] ".
Now the unary "+" operator converts its operand to Number and Number([]) equals to zero.

Now according to algorithm in the 5th point, we already have a primitive value i.e boolean and since none of the operand is a string we convert the first two operands to Numeric and according to the spec, ToNumber(Boolean) is 1 for true and 0 for false.
So true + true gives 1+1 = 2

No we have "2 + true" which is processed same as we did for the first two operands and we get 3.

So both of the results makes sense now.

If Type(x) is Boolean, return the result of the comparison ToNumber(x) == y.

So using that we get ToNumber(true) ==1

Clearly, types are different so result is false

This is was a mind fuck when I was first saw this :p

Lets divide this in four pieces.

Now here, we don't have two operands but two unary operators (! & +) and since ! and + has same precedence we start from left to right.
We first encounter "!" whose associativity is right to left so we evaluate "+[]" which results in 0 (we have already discussed why the result is zero in 7th post)

Now negation operator according to the spec converts the operand into boolean if its not already so if we convert 0 to boolean we get a false.
So, "!false" returns true which is of type boolean.

Taking "true + []" for evaluation according to the rules of addition operator we get a result "true" of type string because the primitive value of empty array is an empty string and if any of the operand is of type string we perform string concatenation.

Now its obvious why console.log("truefalse".length) returns 9

According to the spec, In subtraction operands are coerced to Number and if the ToNumber results are valid then final result is a mathematical subtraction.

As mentioned earlier, Double equals uses Abstract Equality Comparison which allows coercion so our empty array is coneverted to its primitive value which is "" and according to the spec

If Type(x) is String and Type(y) is Number, return the result of the comparison ToNumber(x) == y.

So next time if anyone shares this meme with you then you have answers to keep them shut.

Once suspended, royal_bhati will not be able to comment or publish posts until their suspension is removed.

Once unsuspended, royal_bhati will be able to comment and publish posts again.

Once unpublished, all posts by royal_bhati will become hidden and only accessible to themselves.

If royal_bhati is not suspended, they can still re-publish their posts from their dashboard.