From development to go-live in under 2 minutes 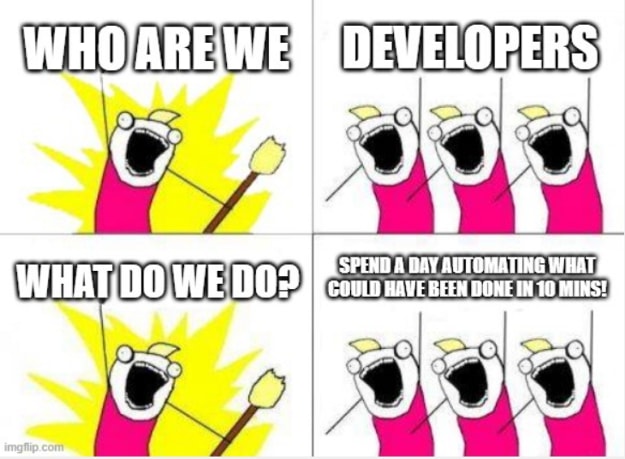 As developers, we are often guilty of doing this. The problem statement is simple:

I have a React application and want it deployed on GitHub Pages.

The simplest way to achieve this is to locally build it, and push the build directory to “gh-pages” branch and viola. Then I introduced Travis CI to achieve this and recently switched to GitHub Actions.

I have already spent more hours setting this up than I probably would have spent doing it manually, so let me first try to justify my actions:

Although my current problem statement does not require much of the aforementioned features, it is easier to get my hands dirty with a simpler project.

The simplest way to start a workflow is to go to the “Actions” tab on your repository and click “set up a workflow yourself”. This will create a file called main.yml with some basic workflow. There is a structure to this YAML file to understand which we need to understand the components of GitHub actions.

The Components of GitHub Actions 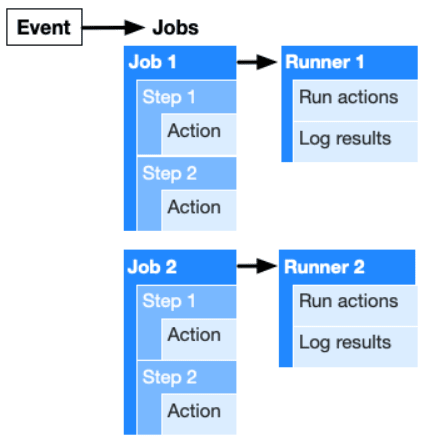 The Components of GitHub Actions, from GitHub Docs

GitHub events (push, pull requests, and so on) trigger one or more jobs. Each job is run on a server that is called Runner instance (Virtual machines or Docker instances). Each job comprises one or more steps and each step performs some actions, ranging from echo on a bash terminal to a complicated action developed by the GitHub community that does some heavy lifting. To know more about the components check out the official documentation.

Now that we are equipped with the understanding of GitHub workflows, it is time to break our task at hand into smaller workable units.

We will be starting with a Ubuntu server, and get the latest NodeJS environment setup. We will have to check out the code and install dependencies. Then we can build and finally publish to GitHub Pages.

And at what point do I want to do this? To answer that, I need to talk briefly about the workflow I follow. I have a development branch on which I work. I make frequent commits and often I do not want to publish changes after each commit. Once I feel I have reached a stable point, I create a pull request on the master branch (this repository existed before they renamed master to main). So I want my action to kick in at a push on master. Note that if I trigger it on pull-request, it will be triggered when the request is created, and I want it to trigger after it is merged. If you have multiple developers, you’ll need to control who can commit on master/main directly.

Let us go over the steps.

And that is all. You are all set to harness the goodness of GitHub Actions!

Apart from this, I have another action that runs the build job on every push to development branch. This ensures I am not breaking anything that will prevent the build when I merge a pull request. Here is how it looks on my repository:

The failing build on my development branch helped me correct my mistake and once that started passing, I opened a pull request and merged it. This triggered the “build_deploy CI” workflow, deploying my changes to my website, all in about a minute and a half! How cool is that?

Setup Cypress & Applitools with GitHub Actions: a comparison of Applitools vs Percy in a mid size app

Once suspended, royniladri will not be able to comment or publish posts until their suspension is removed.

Once unsuspended, royniladri will be able to comment and publish posts again.

Once unpublished, all posts by royniladri will become hidden and only accessible to themselves.

If royniladri is not suspended, they can still re-publish their posts from their dashboard.