Have you ever searched for some text in a file on the command line only to realize that grep's output isn't quite enough for you to understand what is happening in the file? Sometimes you want to see some extra lines or even the whole file with your search terms highlighted.

To See a Few Lines

Here they are in action:

To See the Whole File

A trick to see the whole file is to match a non-printing character that is in every line, like the line start or end.

Although, that's abusing grep a little bit. A better way might be to use the neat search functions of less. Run less example.txt and then type / followed by your search term. If you type /magic<Enter>, you see something like this: 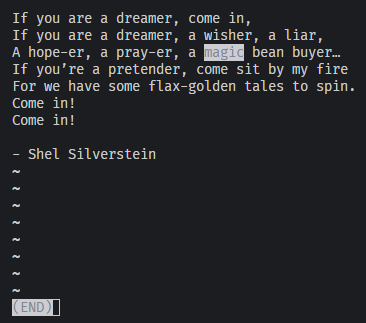 Vim users: YoU cAn Do ThE sAmE tHiNg In ViM!

*I'm kidding. I love vim and use this feature all the time.

But There's No Color on Mine!

There's a --color option for grep. In fact, there's even a --colour convenience option for those so inclined! It can take the values "never", "always", or "auto". "Auto" will colorize the output if it is being output to a terminal, but drop the colors if the output is getting piped to another command or a file. This is because the colors are coded as characters right into the output text, and they'll show up in plaintext output files and other programs like less. You'll see a lot of StackOverflow answers recommending --color=always, but that will give you those weird color code characters and is not probably what you want.

If that works, you might consider putting this line in your .bashrc file:

This will keep you from having to type it every time.

Now you can run a code-server as a service.

How to use JDownloader in headless mode and in remote server

Once suspended, rpalo will not be able to comment or publish posts until their suspension is removed.

Once unsuspended, rpalo will be able to comment and publish posts again.

Once unpublished, all posts by rpalo will become hidden and only accessible to themselves.

If rpalo is not suspended, they can still re-publish their posts from their dashboard.

Once unpublished, this post will become invisible to the public and only accessible to Ryan Palo.

Thanks for keeping DEV Community 👩‍💻👨‍💻 safe. Here is what you can do to flag rpalo:

Unflagging rpalo will restore default visibility to their posts.