Mobile application development is moving super fast for all the UI frameworks. The winner will really be who ever is able to sustain a true community, just like Firebase has been killing all other mobile NoSQL backend solutions. So far Google has been doing it extremely well with Flutter v2.2. In my opinion, unless Microsoft forces its teams to use MAUI/Xamarin like Facebook did with React Native, it risks getting "Silverlighted" eventually.

Just watched a talk at the React Native EU Conference last week, where a Facebook Engineer showed how they had to significantly improve the main branch of react native to improve their fleet of apps and the efficiency of their teams. 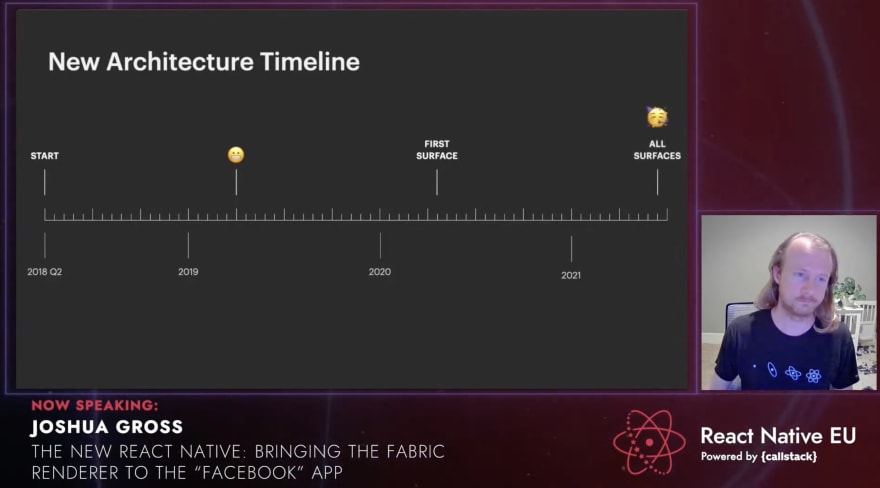 I recently interviewed for a native swift/obj-c position with Facebook, they have entire native teams

“At Facebook, all of our apps using React native, use react native from the main branch..”

Yeah you could be right that they are moving, because he doesn't say "all our apps use react native". But I did some searches and found that in mid-2018, there were unofficial rumors and some reorganization that made people believe that Facebook moved away. But according to the talk, they are still using it for over 1000 “surfaces”.

It’s important to note that all of the biggest drawbacks have already been tackled with updates really. One of the biggest is thanks to the use of JSI (like JNI in Java programming) in the libraries that uses C++ instead of the single threaded “JS Bridge” (for periodic communication between the JS code and native layer), thus you now finally get- “mutli threading” and “native performance”. The first talk of the conference by Marc Rousavi goes through it, and here's his GitHub repo of a React Native app using JSI that detects "colorwaves (swatches/palettes)" from a camera in real-time by scanning each frame:

The First Prototype is an emerging Mobile App Design and Development consulting small business, specializing in Cross platform and Native iOS & Android apps. Sign up on our website, and support us on social media, to be informed of simple innovations in projects like our 5-star NumberBomb game on iOS & Android!


Please subscribe to get updates of articles I write and feel free to let me know on Twitter if you have any questions, and don't forget to connect with me on LinkedIn!

Once suspended, saamerm will not be able to comment or publish posts until their suspension is removed.

Once unsuspended, saamerm will be able to comment and publish posts again.

Once unpublished, all posts by saamerm will become hidden and only accessible to themselves.

If saamerm is not suspended, they can still re-publish their posts from their dashboard.

Once unpublished, this post will become invisible to the public and only accessible to Saamer Mansoor.

Thanks for keeping DEV Community 👩‍💻👨‍💻 safe. Here is what you can do to flag saamerm:

Unflagging saamerm will restore default visibility to their posts.