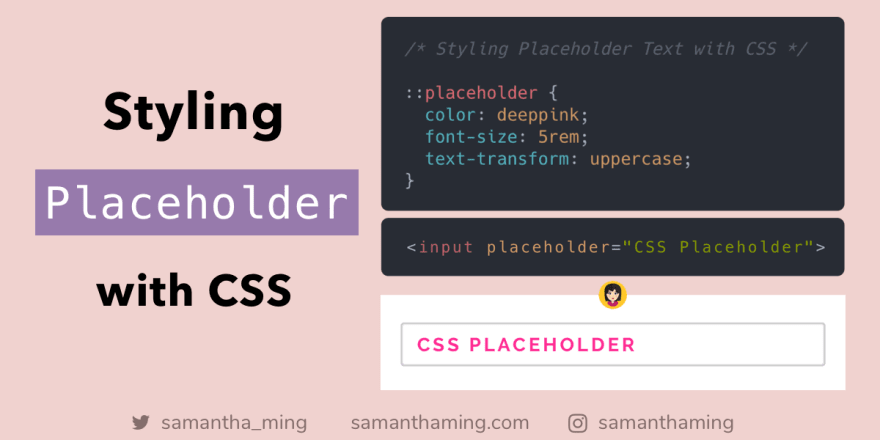 Use the ::placeholder pseudo-element to style your placeholder text in an <input> or <textarea> form element. Most modern browsers support this, but for older browsers, vendor prefixes will be required.

So the syntax I used is supported by most modern browsers:

But for some browsers or older browsers, you will need to use the vendor prefixes.

Whoa! I know, that's a huge list. And you might notice quite a few different variations of implementations. So let's break down these differences and understand what's going on here.

Therefore, in our ::placeholder vendor prefix, you will a mixture of pseudo-class and pseudo-element being used.

Okay, what's this deal with opacity: 1 for Firefox. That's because, by default, Firefox's placeholders have an opacity value applied to them. So to override this, we need to set it. That way our placeholder text will show up and doesn't have the faded out appearance from the default Firefox setting.

So you might also be thinking, why did we not just group all the vendor-prefixes together like this:

Well, that's because there was a rule in CSS3 that states:

a group of selectors containing an invalid selector is invalid.

Let's look at an example to see what this means. Here's a valid CSS selector

So in our HTML, this will appear as expected

But what happens if we add in an invalid CSS selector

Since there is an invalid CSS selector in the group. The entire group would be deemed invalid and no styling will be applied.

That's why we need separate rules for each browser. Otherwise, the entire group would be ignored by all browser.

Read more about this in an article by Chris Coyier, "One Invalid Pseudo Selector Equals an Entire Ignored Selector"

Here's a list of all the styles that you can apply to your placeholder text:

Being able to style placeholders is awesome. But I need to point out something really important - placeholder text doesn't replace the label element, <label>!! I was guilty of this when I first got into web programming 🙁. When your form relies purely on placeholder instructions without labels, it's very harmful to accessibility. Accessibility is not only important to make your website accessible for everyone, but it's also helpful for creating a better user experience. And ultimately creating a better website or web application 💪

Here's a really awesome article about the concerns of using placeholders only without any labels. Below are the top 3 points:

If you don't want to deal with all the vendor-prefixes, you can use PostCSS with the Autoprefixer plugin. This plugin will parse your CSS and add vendor prefixes.