This article is a write-up of part of my Pluralsight course — React.js: Getting Started. I cover similar content in video format there.

A function component is the simplest form of a React component. It is a simple function with a simple contract: 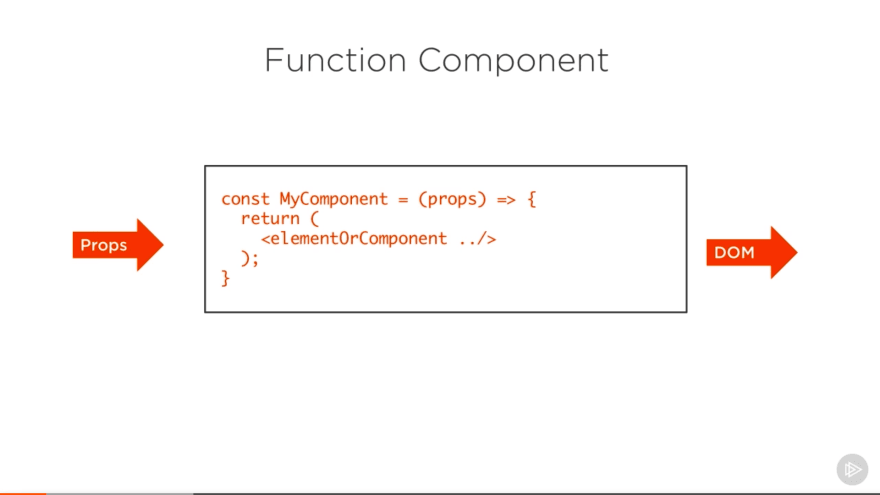 The function component receives an object of properties which is usually named props. It returns what looks like HTML, but is really a special JavaScript syntax called JSX.

A class component is a more featured way to define a React component. It also acts like a function that receives props, but that function also considers a private internal state as additional input that controls the returned JSX. 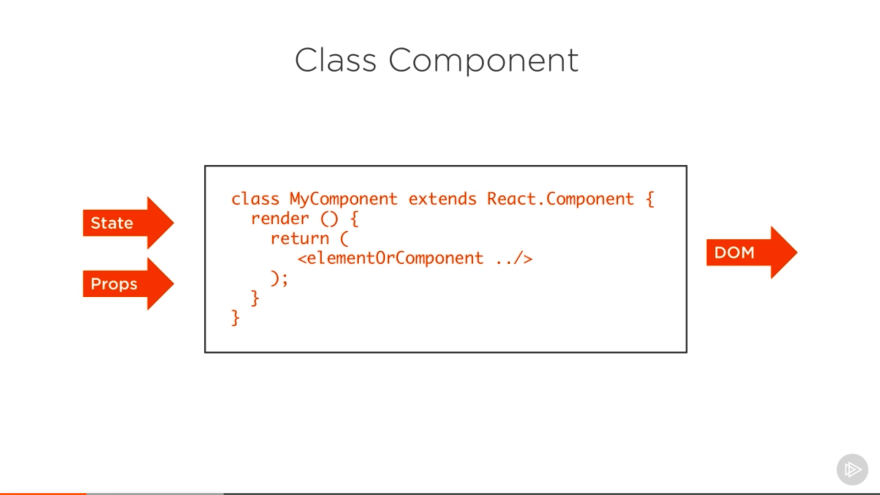 This private internal state is what gives React its reactive nature. When the state of a class component changes, React will re-render that component in the browser.

The State and Props objects have one important difference. Inside a class component, the State object can be changed while the Props object represents fixed values. Class components can only change their internal state, not their properties. This is a core idea to understand in React and this article will have an example of that.

Let’s look at an actual example of a component. A very simple one, without any input and with a simple h1 in a div output.

On the left side, the component is written in the special JSX syntax.

JSX allows us to describe our User Interfaces (UIs) in a syntax very close to the HTML that we are used to. It is, however, optional. React can be used without JSX, as you can see on the right side. In fact, React just compiles the JSX you see on the left to the pure JavaScript you see on the right. Then it works with compiled JavaScript in the browser.

The React.createElement call on the right side is a JavaScript representation of the Document Object Model (DOM). React efficiently translates it into DOM operations that it performs in the browser.

I will be using jsComplete’s React Playground for the examples in this article. It’s a tool where you can test your JavaScript and React code right in the browser. There is no need to install or configure anything.

The tool has a simple two-panels interface. The left panel is the editor where you write your JavaScript and React code. The latest version of both React and ReactDOM are already pre-loaded there. The editor also understands the JSX extension and all the modern features in JavaScript. This will allow us to focus on the React API itself rather than configuring and compiling a React application.

Try the following, for example:

Or the simple REPL mode

What we returned here looks like HTML but remember that it is not. It is going to be compiled into JavaScript. The actual JavaScript that the browser sees when we use this button element in JSX is a call to the React.createElementfunction:

While you can use React this way without JSX, it would be a lot harder to code and maintain. So, let’s stick with JSX.

The function above is a complete and very simple React component. Let’s use it!

We use a component by mounting it in the browser. The function designed to do that is ReactDOM.render, which takes in two arguments:

All code examples in this article have a link in the screenshot caption where you can edit the example at jsComplete REPL.

A React function component receives as its first argument the props object. This argument allows us to make the component re-usable. For example, instead of hard-coding the “Go” label of the button above, we can pass the Button component a label attribute, like we do with regular HTML elements:

Then we can access this attribute inside the component with a curly bracket for props.label.

The props argument is an object that holds all the values that were passed to the component when it was rendered.

We have a button element and it is rendered through a React component.

Let’s now add some interactivity to this so-far boring example. Let’s make that button element increment a counter value on every click and display that value as the button label itself. So the label of this button is going to start with the number 1 and when the user clicks the button its label will change to 2, 3, 4 and so on.

Since this is something that needs to be reflected in the component rendered output, it belongs to the state of the component. We need the component to re-render itself every time the counter changes. We cannot use a property here because a component props cannot be changed. By using the special React state object, we will be utilizing React’s reactive nature and we will not need to worry about how to take the changes to the browser. React will do that for us.

This is very simple. We first define a class that extends React.Component

In that class we define a render function, which returns the component’s JSX; the HTML button in our case.

This is a little bit more code, but we can now use a private state on the Button component!

After that, we initialize this.state to whatever we want. The keys of this state object are the various elements of the state. For our case, we need a counter state, which starts from 1.

Inside the render function, since we can write any JavaScript expression within curly brackets, we can read the value of the new counter state element that we initialized on the state using this.state.counter.

The “this” keyword refers to the component instance we are handing off to ReactDOM.

You can try and change that counter state to see how the button will render the values you put on the state.

There is another shorter syntax to define the initial state, which is to simply use a class property without a constructor call:

This is not yet part of the official JavaScript language but it will be soon. The syntax works at the jsComplele REPL playground because that tool is using Babel to transpile it to the supported JavaScript that the browser will understand.

When you configure your own React application you’ll have to use something like Babel anyway to compile JSX into JavaScript. It is an easy win to also include and use the JavaScript features that are well on their way to becoming an official part of the language.

In the Button example so far, we have a state object and an HTML button element that displays a counter value that we initialized on the state. Now we need to change that value when we click the button. We need to define a click handler on that button.

React comes with normalized events that are easy to use. For this case, we need the onClick event, which we define on the HTML button element itself:

Unlike DOM event handlers, which use a string, React event handlers use an actual JavaScript function. This function can be a global one (like F above), or an inline function:

However, the standard practice is to define a function on the class component itself. Let’s call it handleClick and we can define it on the component as an instance property:

handleClick’s job is easy: read the current counter value from the state object using this.state.counter. Then increment this value and update the component state with the new incremented value.

We can use React’s built-in setState method, which is available on every class component instance, to update a component state.

The button will now increment its label on every click.

This was simple and powerful! We defined an event handler for the onClick method. Every time the user clicks the button the handleClick function will be executed. The function reads the current state of the counter value, increments it, and then sets the state to the new incremented value. React takes care of all the rendering needed after these changes so you do not have to worry about that.

Note that we did not update the state object directly. We have to use React’s setState method when we want to update any element on the state. You can’t for example do this:

React’s setState method is an asynchronous one which schedules an update. Multiple setState calls might potentially be batched for performance. Since we are both reading and writing to the state object inside the handleClick function, we could hit a race condition. The general rule of thumb is whenever you need to update the state using a value from the current state, use the other contract of the setState method. This receives a function reference instead of an object as its first argument:

You only need to use this second syntax of setState if your update depends on the current state. However, it may be a good idea to make a habit of always using the second function-argument syntax.

Here is the final code:

Test it out and if you have any questions let me know.

This article was originally published here

Once suspended, samerbuna will not be able to comment or publish posts until their suspension is removed.

Once unsuspended, samerbuna will be able to comment and publish posts again.

Once unpublished, all posts by samerbuna will become hidden and only accessible to themselves.

If samerbuna is not suspended, they can still re-publish their posts from their dashboard.

Once unpublished, this post will become invisible to the public and only accessible to Samer Buna.

Thanks for keeping DEV Community 👩‍💻👨‍💻 safe. Here is what you can do to flag samerbuna:

Unflagging samerbuna will restore default visibility to their posts.