I must admit, when I first got introduced to CSS, I hated the idea of using CSS frameworks. I saw it as a lazy way to go around a challenge.

But along the way, as I played around with a few frameworks, I realized they save you the headache that is CSS coding.

In this article, we look at five of the best CSS frameworks that you can start learning or using today. But first, why use frameworks anyway?

Why use CSS frameworks?

If you are new to CS, centering elements or creating a responsive navbar can be a daunting task – it used to be for me.

Luckily with CSS frameworks such as Bootstrap, this is a walk in the park.

These tools introduce you to complex CSS concepts in a beginner-friendly manner allowing you to accelerate your learning process.

They come with well-detailed documentation so you can refer to them should you get stuck.

Also, this helps you to smoothly communicate with a client should they request changes or support.

With a CSS framework, you don’t need to build blocks from scratch. They come pre-designed all you have to do is tweak them to your desired outcome.

Besides, most frameworks will come with pre-built components such as navbars and menus.

Imagine the sting you get when you create a website only to realize it does not render in several browsers, awful! Right? This is where frameworks come in.

They ensure that your websites can render in different browsers with little input on your side.

They make your CSS code clean, readable, and scalable. No longer do you need to use weird class names since they come with pre-determined classes.

As such, you’ll have an easy time debugging or explaining code to your teammate or client.

These frameworks provide you with features that are lacking in vanilla CSS.

While they do not output the CSS code, they help you write the code faster.

The most popular are Less, SASS, and PostCSS.

Most CSS preprocessors come with plugins and frameworks for easier coding.

They are the most popular CSS frameworks as little coding is needed.

They feature pre-designed components such as tables. The downside, they might make your website look generic since the HTML structure is pre-determined.

The most used include Bootstrap, Materialize, and Bulma.

If you want to use these frameworks, I recommend having basic CSS skills under your belt.

Why? Because you’ll have to write vanilla CSS and HTML code. The best part, they are flexible allowing you to create unique HTML structures.

Frameworks to consider include Tailwind CSS, Tachyons, and Shed.CSS. 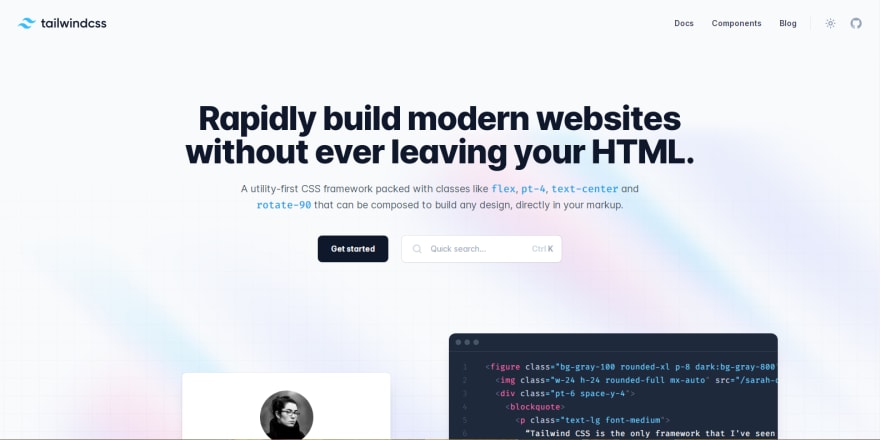 If you want a CSS framework that allows you to do more, consider Tailwind CSS.

In fact, it is becoming a favorite for me. It is lightweight, flexible, and does not come with pre-designed components.

However, thanks to their classes, you can create components faster.

Whether you want to use Flexbox or Grid for your layouts, Tailwind CSS got you sorted.

It allows you to bolster your productivity thanks to the reusable components.

And since you don’t have to input your classes, it makes creating components from scratcher easier.

In fact, most experienced front-end developers use it for large projects.

Tailwind does not come with pre-made designs. It gives you classes to create the designs.

As such, you won’t override designs that can crash the website

Do you find yourself copy-pasting classes? Well, with Tailwind, this is a thing of the past.

Thanks to the Components feature, you can reuse your designs throughout your project.

This is arguably the most popular framework. Since its introduction in 2011, the framework has gained a reputation among novice and avid front—end developers.

It is the framework that introduced the “mobile-first” concept through the grid concept.

The concept utilizes 12 columns so you can easily create components that take a third or half of the screen.

It comes with pre-made components eliminating the need to code them.

This means you only need to code the HTML structure and apply the provided CSS classes.

Being the most popular, the framework attracts a large support community.

Besides, you can get just about any answer to a Bootstrap question on platforms such as StackOverFlow.

In fact, its GitHub page consists of more than 2000 contributors.

It has robust documentation that allows you to easily get started with CSS.

You can customize Bootstrap using SASS.

With SASS installed, you can import the Bootstrap project and use the SASS variables to give it a personal touch.

In fact, this is what most front-end developers do to save their coding time.

Think of React, Angular, or WordPress. What do they have in common? Backing from an established entity.

The same case applies to Bootstrap. It is backed by Twitter significantly bolstering the faith among developers.

Closely following Bootstrap is Foundation. It is built in HTML, CSS, SASS, and JavaScript.

It is yet another framework that is popular among avid front-end developers.

This is because it offers flexibility while coming with stellar designs.

Not only does it allow you to create stunning websites but also animations and emails.

For this, you’ll need to use Motion UI for animations and Foundation for Emails to create converting emails.

Foundation is the most ideal CSS framework for large projects.

The framework allows the developer freedom to create components, unlike Bootstrap.

As such the framework is well-suited for established developers since you’ll have to incorporate vanilla CSS.

The company behind Foundation offers support to large clients. It also offers training to teams which is uncommon with other frameworks on the list.

Besides, ZURB – the company behind it – does not treat Foundation as a side project, rather, it pours its resources to advance the framework.

While a new entrant in the market, Bulma has attracted a large user base thanks to its elegance and beginner-friendliness.

What’s more, it is entirely created in CSS, unlike other frameworks that have JavaScript components.

The framework is a favorite among many front-end devs since it allows you to create visually appealing designs.

With SASS, you can seamlessly customize components to your liking with little input.

Not only is it compatible with Font Awesome 4 and 5 but also with Laravel (a PHP framework).

If it’s daunting to come up with elegant designs, I’d recommend you use Bulma.

It eliminates the fluffy CSS codes allowing you to use easy-to-read CSS classes.

Bulma has a rather flat learning curve. However, this is dependent on your CSS foundation skills.

As of writing, the framework has more than 40K starts on its Github page.

This means that developers buy into the idea of using Bulma.

Finally, we have Materialize CSS from Google. The main aim of the framework is to achieve uniformity to Google UI using Google Material Design.

It is written in JavaScript, CSS, and HTML. It is hailed for enabling one to create responsive, elegant, and browser-compatible websites.

And if you are into animations, I bet you’ll love working with Materialize CSS.

Why use Materialize CSS?

It has an elegant design that allows for the creation of appealing web components.

Besides, you can use their exquisite templates.

Curve it comes with easy-to-understand documentation that makes learning a walk in the park.

While this is not an exhaustive list, these are some of the popular CSS frameworks that have a large community.

There are supported by at least all browsers and make learning and using CSS seamless.

Other frameworks that you can consider include Skeleton, Sematic UI, Pure CSS, and Susy.

So, which CSS framework do you use for your projects? Let me know in the comment section.

Once suspended, samlan will not be able to comment or publish posts until their suspension is removed.

Once unsuspended, samlan will be able to comment and publish posts again.

Once unpublished, all posts by samlan will become hidden and only accessible to themselves.

If samlan is not suspended, they can still re-publish their posts from their dashboard.

Once unpublished, this post will become invisible to the public and only accessible to samlan .

Thanks for keeping DEV Community 👩‍💻👨‍💻 safe. Here is what you can do to flag samlan:

Unflagging samlan will restore default visibility to their posts.