Also available on my blog.

Last year after finding myself between two jobs, I interviewed with a bunch of start-ups in Paris. All successful businesses, the crème de la crème of the FrenchTech, looking for experienced developers to consolidate their tech teams.

I discussed with CEOs and CTOs about their visions for business, project management, and company culture. Of course, I would often quote the famous "Basecamp books".

What are the Basecamp books?

Basecamp is a famous project management startup. They wrote a series of equally famous entrepreneurship books, advocating for a shift in the industry towards a culture closer to their own. “Shape-up”, “Remote work”, “Rework”, “It doesn’t have to be crazy at work”, “Getting real” - All great books filled with great advice.

That’s when I realized something peculiar.

Most of the CEOs and CTOs I talked to actually read most Basecamp books.

Everyone I talked to, and I do mean everyone, agrees with the amazing content of those books, and on the necessity to follow such great advice.

There was still a problem.

No one is actually doing it.

Remote work? That’s amazing, and great, and the future. No, we don’t do that here. Basecamp’s advice on project management? It’s great! We won’t change how we do things though. Their company culture? The best! No, we won't change ours.

The problem with Basecamp books is the following: it’s great advice, everyone knows it, everyone agrees on it, but no one actually wants to apply it.

The understandable fear of consequences

Don’t get me wrong, I’m not saying every company should copy-paste the Basecamp model. What works somewhere might obviously not work somewhere else.

But there is wisdom in those books, and on this approach to work and to life. A wisdom that companies consistently refuse to apply.

How many companies were forced into remote work by the pandemic, and realized it was actually great? How many of them used to categorically refuse remote work beyond maybe a couple days a week? And why was that?

Worse, how many companies had great remote work success during the pandemic, but will shift back to mandatory on-site work once this is all over? Even worse, many did not even wait for the end of the pandemic before doing so.

I heard all the excuses from CEOs and CTOs. “It’s great, it’s just not for us” - For a web development company, this is most of the time just not true. Webdev is one of the easiest jobs to migrate to remote. “We don’t have the infrastructure for remote work” - what prevents you from putting it into place?

The truth is that CEOs and CTOs are afraid. And don’t get me wrong, I’m not throwing any stones here. Managing a company is hard and stressful. I sure would be afraid as heck too if I was managing dozens of employees. Change is difficult, and frightening, and scary. That’s understandable.

Still, pretending that “it’s just not for us” is a bullshit excuse.

What I’m asking is that you would at least be honest with yourself and your employees, and take a long hard introspective look at why you don’t think remote work is good for you. Why would your company be the one exception?

The understandable fear of change

The first reason why companies are reticent to remote work is that they fear a loss of communication / interaction between employees, leading to a drop in innovation, camaraderie, and productivity. They’re afraid that the soap will stop bubbling, so to speak.

That’s understandable. There’s just a problem with this: it’s not true.

Data shows that remote work, when well managed (and it’s really not hard to manage well) does not have those downsides. So many companies were forced into this reality because of the pandemic. But we had told them before! The information was already out there!

They were just not brave enough to trust the data and take a leap of faith.

It’s like bungee jumping. On the surface level, you know it’s actually a safe activity. You have a very resistant elastic rope, which will prevent you from crashing in the canyon below. You know it’s safe. Yet, deep down, your brain refuses to jump.

Understandable. Still, not a good excuse. Remember: the health of your company and your employee's happiness are the stakes here. Take the damn jump.

The other reason why companies are reticent to remote work, and they won’t say this one too loud, is that they don’t trust their employees enough to let them work at home.

But as anyone who ever worked in a big office will tell you, slacking off is easy at the office - heck, it’s way easier to slack off at the office. You’re merely getting paid for existing at the office, when you’re paid for your actual work at home.

“If you’re afraid your employees will slack off at home, you’re not a manager, you’re a babysitter, and you have far worse problems on your hands than remote work”.

Remote work is an excellent example of a company practice that has been proven time and time again to be good for the company and the employees alike, yet which still needed a whole effin' pandemic before being forcibly adopted globally. It’s just one aspect of a certain company culture paradigm that many companies just won’t adopt.

And the reason they won’t adopt it, most of the time, is that they don’t believe in the underlying values that make it work.

Yes, most of your employees are very probably hard-working people. Yes, most people have job ethics. No, most of them don’t need their boss over their shoulder for increased productivity, quite the opposite actually. The fact that you don’t believe this enough is a problem.

There is a culture of positivity and trust towards which we should all tend, and there are obstacles in the way in the form of toxic, deeply-ingrained values. The fact that we’re not shifting towards the carrot but are sticking with the stick is, to put it mildly, a shame.

Again, it's a very human thing. As a CEO, even I would feel nervous sending my employees home. Yet we need to trust the data, and our employees.

Smart employers don't value your happiness out of them being nice. They do it because they want happy, productive employees who can then give the best of themselves. They do it because increasing employee retention is extremely important, yet most companies seem to just have given up on fixing their high turnover.

We need to understand that making employees happy is a smart business decision. Managers who don't believe in this just can't be good managers. And they will make people unhappy and unmotivated, which is a loss for everyone. Fear of change is a bad, but understandable excuse. Shitty values on the other hand, are just inexcusable.

Diversity in the workplace: the emperor has no clothes.

I talked about remote work in the previous section, but sadly, there are many other ways our lacking culture affects all of us.

Did you read that well? Diversity is strength.

The problem with "Diversity is strength" is that we evolve in such a corporate-bullshit environment, full of nice words and empty catchphrases, that no one really believes in it anymore, yet we keep repeating it like empty-brained parrots.

Diversity is a strength for the company, but no one really believes it. People seem to believe that adding diversity in the workplace is an act of charity, or social justice. And while it's true that minorities / women are disadvantaged in the workplace, one could argue that charity or social justice have little to do at the core of a profit-seeking company in a competitive capitalist environment.

Which explains why "Diversity is strength" is so rarely acted upon, and instead is usually no more than a conventional -if not boring- thing to say from time to time in executive meetings. It sounds hollow. Just like when companies repeat "we care about your privacy" before selling away as much of your data as they can.

How many times in your company did you actually hear "I think we would be more efficient / creative if our team was more diverse"? And then witnessed an actual plan for diversity being put into action? Speaking for myself, not very often. 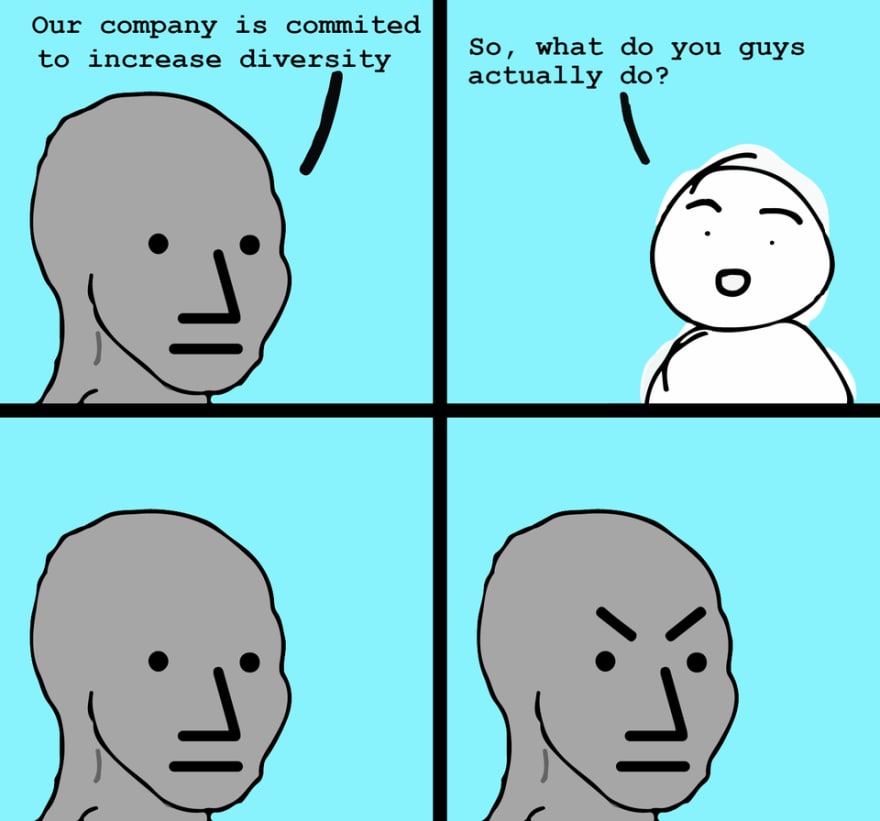 Everyone "believes" in diversity. Few people actually believe in it.

Here's the kick though: diversity is a strength in the workplace. There's only so much white men can know, especially when they're all from the same socioeconomic background. Having different paths of life crossed in your company can be of tremendous help for your efficiency and creativity, for extending your brand internationally, or to provide a better service to your customer base. It brings actual profit. This is not charity, this is practical, good ol' capitalist selfishness.

How many times did a racist advertisement end up in popular backlash? And everyone is then left to wonder if indeed those ad designers have a single person of color in their office. Someone who could have warned them that they were publishing unacceptable content.

How many time did you witness a company commit to the dumbest market or business decision, and everyone is wondering what's wrong with them as they inevitably end up crashing and burning? More often than not, a lack of diversity is an answer here.

Even Basecamp fu**ed it all up

Recently, Basecamp fu**ed it all up for taking the easy road on a hard problem, leading to a third of the company's workforce quitting all at once.

I'll let you be the judge on what went wrong, but from my point of view, it feels like some diversity in the higher chain of command would have prevented such a massive management failure.

We know what we should do, yet we don't do it. And this is true outside of the "human resources" sphere as well. As a tech example, how many developers did you meet who agree that testing their app is extremely important and saves time… but they just won't do it?

No conclusion, but a call to each and every boss, manager, lead developer, and employee to stop and think and take a deep, honest look within.

We can do better. We should be doing better. We owe it to ourselves and to each other.

The data is out there. Study it, and then apply conclusions from it.

Because there probably won't be another pandemic to force us into good managerial practices for quite some time.

To go further: an analogy to understand the technical debt

How do you focus??

Once suspended, samuelfaure will not be able to comment or publish posts until their suspension is removed.

Once unsuspended, samuelfaure will be able to comment and publish posts again.

Once unpublished, all posts by samuelfaure will become hidden and only accessible to themselves.

If samuelfaure is not suspended, they can still re-publish their posts from their dashboard.

Once unpublished, this post will become invisible to the public and only accessible to Samuel FAURE.

Thanks for keeping DEV Community 👩‍💻👨‍💻 safe. Here is what you can do to flag samuelfaure:

Unflagging samuelfaure will restore default visibility to their posts.