We have all heard the hype about Quantum Computing...

"Quantum Computers are gonna break everything!!"

In a world where 'quantum' is equally likely to be used to sell you dishwasher tablets or toilet paper, as much as it is to be used as a way to scare people with headlines like "Quantum Computing and the End of Encryption" (really, really not helpful, Hackaday...) there is now somewhat of a skills rush to be able to have technicians who can make sense of this bold new world of quantum computing.

What this Hacktober project will demonstrate is the following:

TL;DR - we're going to work through the theory to arrive at this proof of concept - and then offer up the model that we can build up and collaboratively code as part of the Hacktober activities so that we can arrive at a pretty cool output: Quantum-RNG-as-a-Service! #QRNGaaS

DISCLAIMER - this code is NOT for use in production systems without a significant amount of extra engineering and checking. YMMV and Caveat Developer!!

It's impossible to do much with quantum computers at the moment without delving into some deep-tech ideas of what is going on at the fundamental level of a quantum computer - principally discussing the idea of a 'qubit'.

But why do we have to do this? Well, the reason is that quantum computers are much closer to a Z80 processor than they are to a modern Intel i9. And like with the Z80, in order to make them workable, you have to have a good idea what is going on deep under the hood. One day we will have a wonderful, iterative abstraction model for quantum computing - but sadly, that day is not today!

So what isn't a quantum computer?

Put simply, a quantum computer is not 'just a faster computer'! Quantum algorithms operate in a totally different way to regular, 'classical', computers.

You're not gonna get MS Flight Sim running any better with quantum computers - especially not as they are right now! Quantum computers are still specialist pieces of equipment.

NB - our emphasis for 'quantum computing' here is on the 'computing' rather than the 'quantum' part... so we'll keep this bit brief :P

So what's the big deal?

The fundamental deal is that quantum technologies (usually, but not exclusively) make use of two quantum effects:

This leads us to the next question - how do you actually do this?

Well, first up, let's discuss the structure of a qubit in comparison to a regular 'bit'. A bit is just a one or a zero - and it is always exactly one OR the other, NEVER both. A qubit, however, can be in some superposition of the 'zero state' and the 'one state' - when you measure it, you will always get just a '1' or a '0' as your output, just like a bit. The difference is that it can be either 0 or 1, with some probability of being one or the other across many measurements.

To understand this better - take a look at the following diagram: 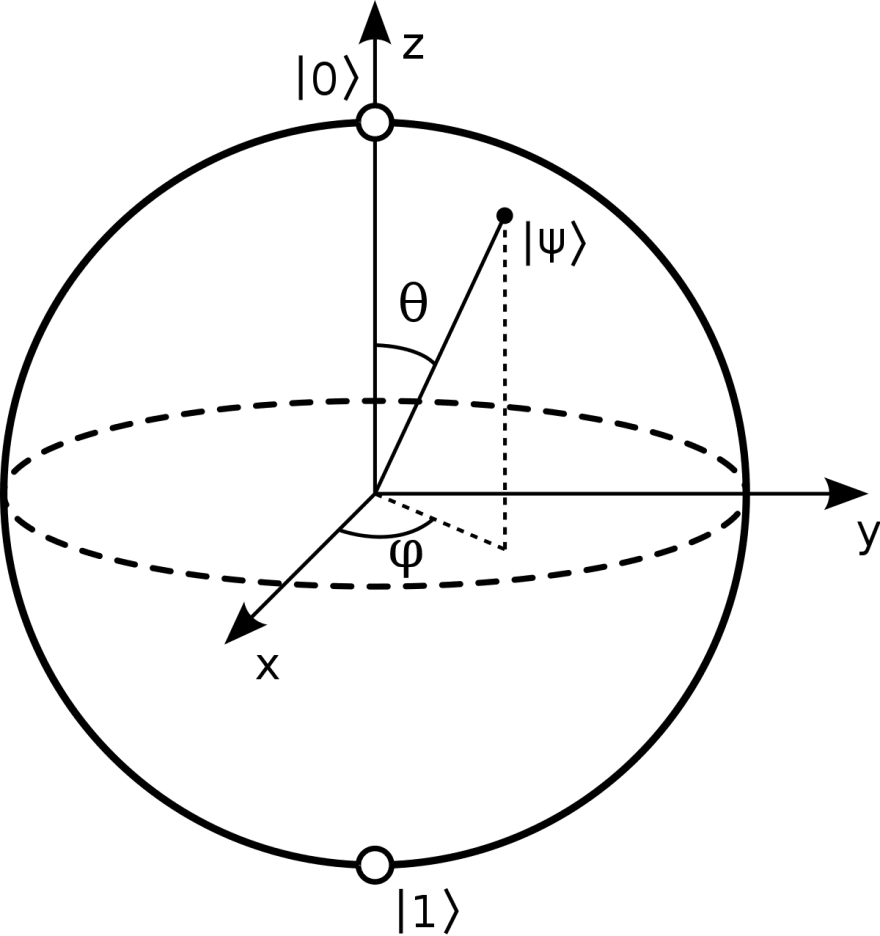 This is called the 'Bloch Sphere' - and it represents the 'sphere' of possibilities for the position of a qubit's state, which we usually write as |ψ⟩.

I'm not going to go into things like unitary gates, the 4 postulates of quantum mechanics, linear algebra, inner/outer products, tensor products, seperable states, etc. etc. - if you would like a reasonable primer, look at these slides.

Before we go on - here's an emergency post-mathematics kitten: 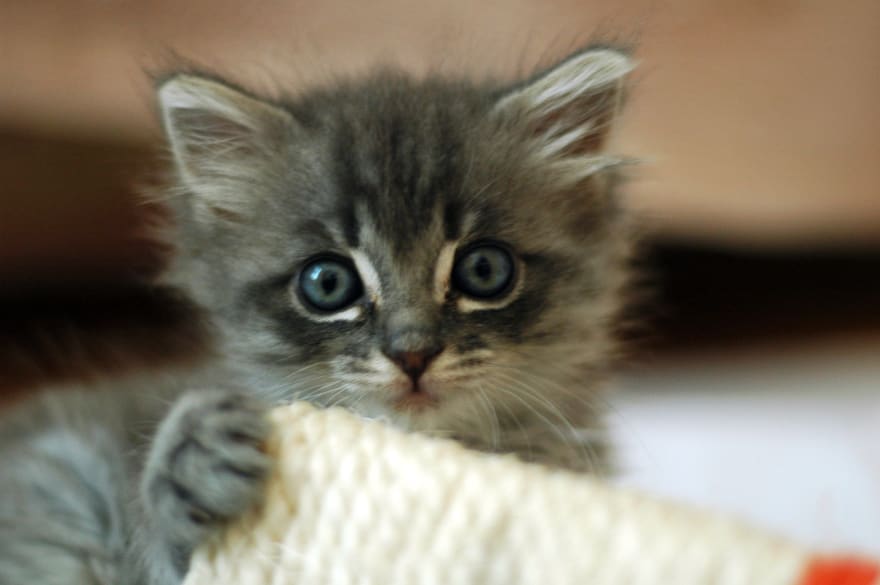 Now, this was actually important for the next piece of the puzzle - how you program a quantum computer! Because everything is now reducible to two-place column vectors that have nice properties - we can now manipulate them easily with 2x2 matrices! This is exactly what forms quantum gates.

But what do we mean by 'quantum gate'? Well, classical computers have logic gates; AND, OR, NOT, NOR, NAND, XOR, etc. which are placed in various combinations to make computer programs. All of our computation is fundamentally reducible to these gates.

In the same way, a quantum algorithm is formed from the composition of quantum gates, these 2x2 matrices, in sequences we call 'quantum circuits' (analogous to 'boolean circuits' for those familiar with them).

What do these quantum circuits look like? Well, we can see an example here:

We assume that on the far left, all qubits are set to |0⟩ (with the vector pointing up on the sphere). Now we can apply gates - and some of these gates have special names;

For the ultimate output, the classical bit 'buffer' is the lowest line in these diagrams - and when we measure qubits we get either a 0 or a 1, and these are placed into the buffer sequentially.

So how do we get an output? Well, the quantum computer will run our circuit more than once, and give us a graph of the outputs - so when I ran the above I got the following output graph:

You will notice that we 'almost always' got a '11' (which if you check the matrices is what we should have gotten) but there is just over 13% of the outputs that were the other three possible states for 2 qubits. This inherent noise is why quantum computers such as these that don't do quantum error correction are called 'Noisy Intermediate Scale Quantum computers' or NISQs.

NB - There is also a Quantum Assembly language called QASM! For the above circuit, it looks like this:

It is also worth mentioning that the above circuit is not what is actually run - the commercial quantum computers implement a reduced set of gates that are equivalent under combinations to every theoretical gate. This transpiling is very common - for the above circuit, the transpiled circuit looks like this: 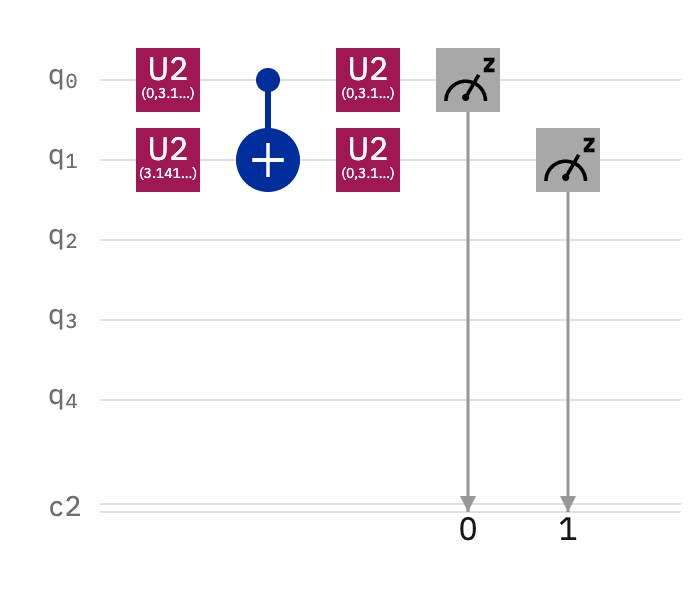 I'm skipping over MANY details here, so if you want to learn more have a look at these resources:

You'll note that I didn't explain what was really going on in the circuit above - it's not that important (it is a circuit that is equivalent to an inverted CNOT, part of the Bernstein-Vazarani algorithm, for the curious). But the next bit will require us to go into some depth - we're going to show how to acquire some of the best quantum-ly random bits from a quantum computer! We can then use these to fold into a local entropy pool for generating random numbers.

When Google announced quantum supremacy what they had achieved was the measurement of randomness in a few hundred seconds that would take a supercomputer 10,000 years to perform the same fidelity of operation. This is a similar process that companies such as Cambridge Quantum Computing use (we presume, anyway) to measure the randomness of a source and help it be 'better' randomness.

But who cares about this?

Who would find this useful? Well - consider the following clients and use cases:

We are not going to do anything so fancy here - we will, however, use the following algorithm:

The rough block diagram is here: 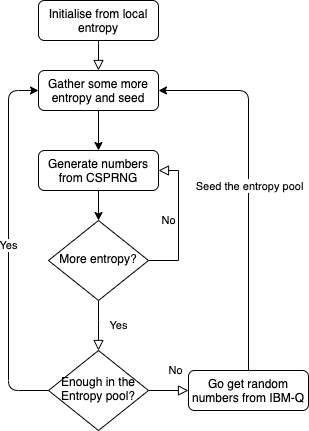 So we will setup a background job to use the IBM-Q python API in qiskit, and whilst we wait, we will generate random numbers on the fly for as long/as many as we need to provide. 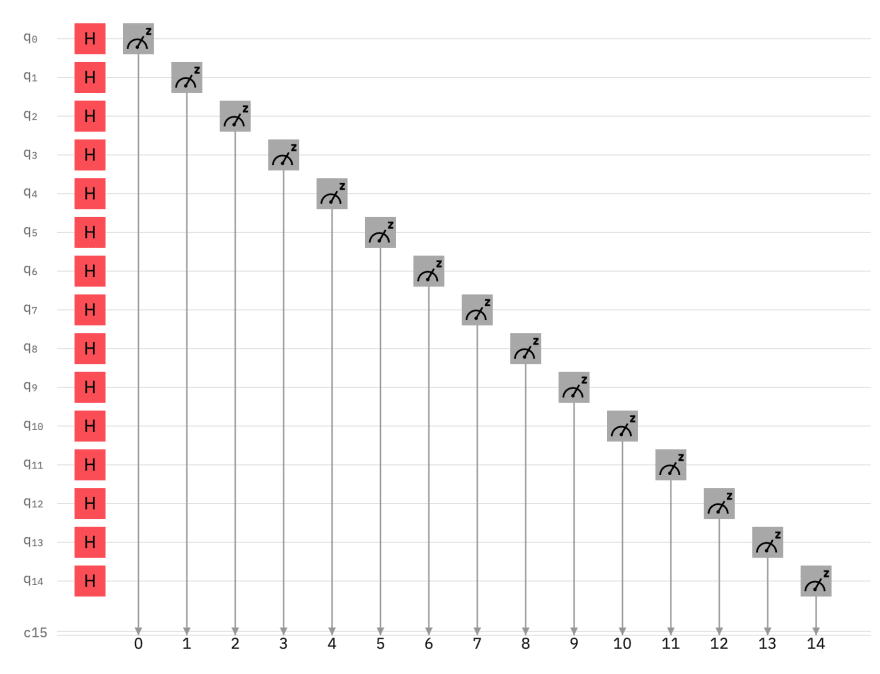 Now, we note the following calculation:

And this is the core of our service! 😁

But what is there to hack?

Well, so far - this just shows how to generate random numbers locally from a class with the background process occasionally asking IBM-Q very nicely! (NB - you'll need an IBM-Q account and API token for the script, but these are free!!)

What can we build? Well, consider the following:

Or anything else you can think of to get good quality randomness to those who need it!

Show us the money!

For those who want to see a PoC flask-based API service (only two endpoints, but it should be quite illustrative) then have a look at the following github repo:

A Quantum computer based CSPRNG, written in python, as a PoC for using QCs in services.

But if you want an all-in-one script to play with, we have that, too! Now I have discussed the base theory - here is the proof-of-concept script!

Special thanks to Dr. Joe Wilson (@jmaw88) for his help in proofreading this post. :)

How to make calculator with CustomTkinter

A space for Santander IT experts to share technological knowledge, best practices, guides and industry trends.

Once suspended, sanexperts will not be able to comment or publish posts until their suspension is removed.

Once unsuspended, sanexperts will be able to comment and publish posts again.

Once unpublished, all posts by sanexperts will become hidden and only accessible to themselves.

If sanexperts is not suspended, they can still re-publish their posts from their dashboard.

Once unpublished, this post will become invisible to the public and only accessible to Mark C..

Thanks for keeping DEV Community 👩‍💻👨‍💻 safe. Here is what you can do to flag sanexperts:

Unflagging sanexperts will restore default visibility to their posts.