Sometimes learning a new language and stack can seem so alien, well at least it did to me. You know that programming in any paradigm is generally the same and all the rest is just syntactic sugar but it's hard to really see past that at first; especially when StackOverflow doesn't have the answers you're looking for.

Luckily, I've written a beginners guide on Node Express for you guys. I got you. If you're dabbling into new territories, looking into something new or changing stacks for a new project this blog is a sanity check for all you Java developers. So, let's get into it!
Disclaimer: I am not a Node.js expert but I learnt the hard way so you don't have to 🙇🏻‍♀️

This is a long read, here are the contents - jump ahead:

🤔 Why Node? Is it for you? Here are some things to consider...

Node (officially known as Node.js) has been a buzzword in the tech scene for a long while now. It seems like it's not going anywhere anytime soon either, so why Node?

Node is server-side JavaScript runtime built on using Chrome's V8 JavaScript Engine and it's key attraction is that its non-blocking I/O. I know... non-blocking who? Well, this will determine if Node is right for your project. In my opinion it either is or it isn't there are no in-betweens (marmite vibes).

The V8 runtime engine is single threaded and it uses an event loop to execute events in the queue. In Java the thread queue has a number of tasks awaiting execution by a thread pool right? In this case an event is a task and an event loop is the execution engine.

A callback event that is added to the back of the queue with the asynchronous response. Now other events can be executed in the meantime and there's no waiting around, hence 'non-blocking I/O' 😉

Disclaimer2: I made an error in this diagram, task is meant to read 'event'

For this reason, Node can perform faster for event-driven uses, like web servers, real-time server (that use web sockets for example), CRUD heavy apps and API's.

Beyond the runtime, Node uses JavaScript and benefits from:

Now we know what Node is, when we should use it and what the runtime brings we can get into package/build management, JavaScript basics, Node Express architecture and TypeScript.

If you're familiar with npm you may want to jump ahead to the next section.

To use npm, you would need to install both node and npm and use it through its CLI. Get started here.

Each npm project has a package.json in the root project folder. This file defines the project name, version, author, description, license, dependencies and much more. Project dependencies are downloaded into the root node_modules folder.

There are two types of dependencies, project dependency and devDependencies which is only required in development. For example a library CLI may only be required for developers, perhaps? I would compare this aspect of npm to Maven.

Typically your node application you should have at least a start, test and build tasks - but you can have as many as you'd like. These would be run by your continuous integration pipeline I would compare this aspect of npm to Gradle.

If you're familiar with JavaScript you may want to jump ahead to the next section.

JavaScript, although it can be considered to have object-orientation it isn't really typed (if this is a deal breaker I'd recommend looking into TypeScript).

All class properties are regarded as optional and so are function params.

These two are good to keep in mind when starting to write JavaScript code, it's something that still catches me out.

For example, what does if(0) evaluate to?

If you're familiar with Java 8+ functional programming, JavaScript would be all the much easier. Here are a few things to note:

The standard is that JS files are cased using kebab-case. Class names are PascalCase. Variables are camelCase. To be clear, if you have a string utils class for example, the class name should be StringUtils and the file name should be something like string-utils.js

File names do not have to correlate to the class name. Sometimes a files name will have its function within it prefixed and suffixed with a dot. For example a user REST controller class could be named something like user.controller.js.

var vs const vs let

Variables are defined using var, const or let with ES6.

Promises are asynchronous objects that it promises to callback with a result, which is either resolved or rejected.

A great analogy for Promises is making an order at a restaurant. The single thread worker is the waiter and the order is the task.

Shout out to Jo Franchetti' medium post of that awesome GIF

You can make an order with the waiter, they will then place that order and in the meantime take another orders. When your order is complete, the waiter bring it to you when they're next free. Note the waiter did not wait at the counter until the order was complete.

The resolve or rejection values are returned into two functions,
.then() and .catch() respectively.

There are many great JavaScript logger libraries to use, to list a few of the popular ones; Winston, Morgan or log4js. Each of these have transport capabilities, logs can transport to console, a file or a cloud logger like Amazon CloudWatch or LogDNA.

Although JavaScript isn't compiled you can run static code analysis tool for identifying problematic patterns with ESLint. Unlike a compiler, ESLint has rules that are configurable and loaded into builds or IDE.

I like AirBnB's ESLinter, its fairly comprehensive and thorough. It holds me to write to a good and consistent standard. To get started use npm to install the ESLinter or read the rules on their GitHub (packed with good, bad and very bad examples, it's pretty cool).

Finally here are a few libraries that are a must have in any JavaScript project:

We've already discussed Node but what is Express? Express is a web application framework for Node, it is designed for building web applications and APIs. It's popularity is based on its simplicity and ease of use. (Emphasis on the simplicity, the Spring ecosystem offers Security and Access Decision Voters that Express does not)

I've found the 3 layer architecture to be the cleanest way to separate the concerns following the SOLID principles. 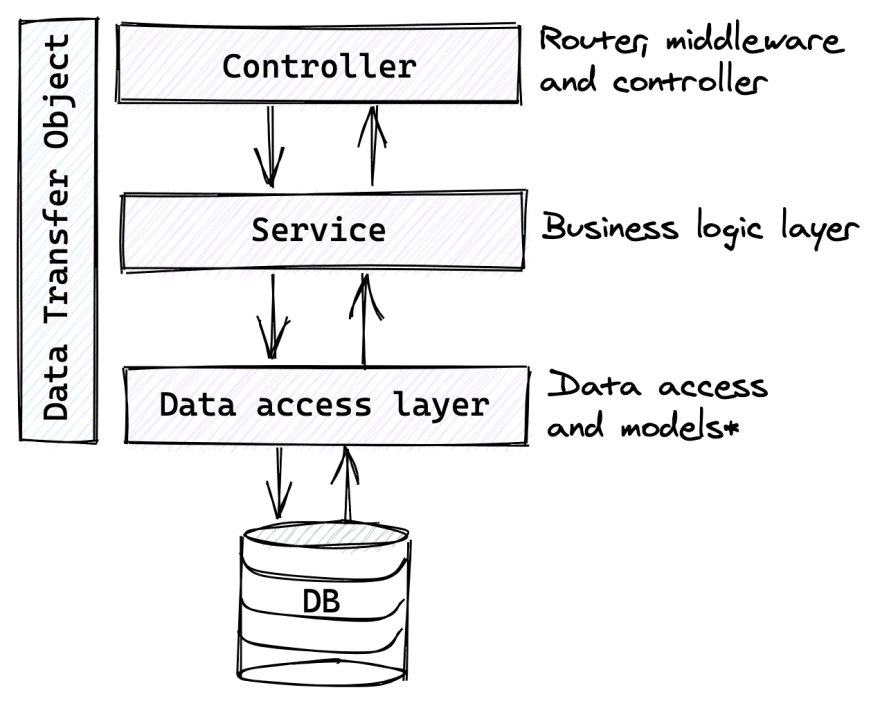 The middleware intercepts an API routing logic with some function(s). Middleware is where you would typically handle authentication, authorisation, parent child relationship and controller. 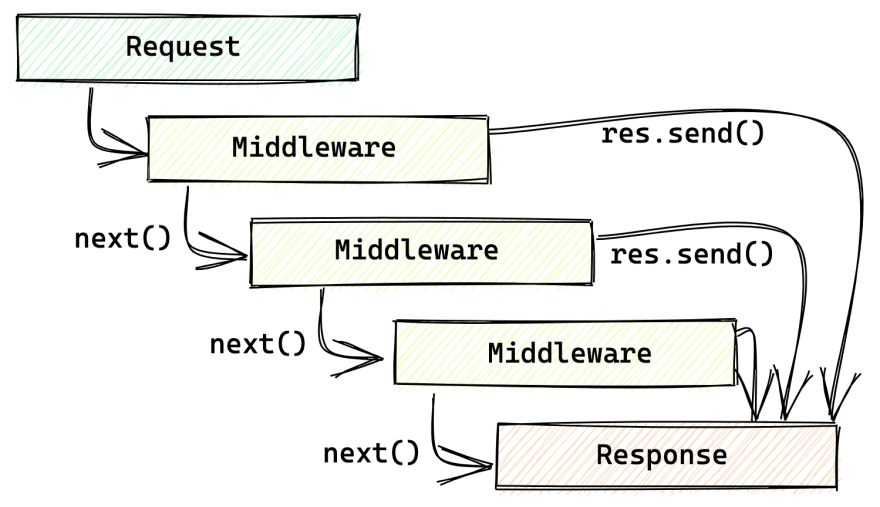 Middleware ordering is important, the logic that is chained can break at any point. I would advise authentication comes first for obvious reasons.

For authentication I'd recommend looking into JWT (JSON Web Tokens). For password hash and salting I would highly recommend bcrypt.

Secrets are stored in the root .env file. This is accessed via process
E.g: .env file:

The two most popular ORMs are Sequelize and TypeORM. Sequelize is a JavaScript library that can be used by TypeScript as well. TypeORM is purely a TypeScript that heavily uses annotations on entities (models). TypeORM is closer to Hibernate with JPA style approach.

Both ORM's support a wide variety of database dialects from RDBMS to NoSQL.

However you may be pleased to hear that unlike Hibernate, these ORM also handle migrations. Thats right, you no longer require another framework like FlywayDB or Liquibase for migrations. It's nice to have this all in one place.

Both have great documentation and support, which you chose will depend on your coding style. Which leads me to my next and final topic...

So far we've discussed JavaScript, Node, Express, Architecture and ORMs... you may be thinking what else is there?

To summarise JavaScript is a great scripting language, especially with ECMAScript latest versions. However, JavaScript is a procedural language, it isn't compiled so errors are usually found at runtime, its has a loose un-typed models that make hard to ensure functions/classes are used as intended and its missing access modifiers that help use of basic design patterns like the singleton pattern.

This is where TypeScript comes to the rescue. TS which was developed by Microsoft is a scripting language, that addresses these very problems. Since JavaScript isn't a compiled language, TypeScript is transformed into JavaScript through transpilation (simplicity its referred to as compilation so I will too).

So what does TypeScript have that JavaScript does not?

With that said you can see that TS is heavily influenced by C# so naturally it feels so familiar... and thats the problem.

So far I've tried to remain impartial however heres my 2 pence. In my opinion to really benefit from what TypeScript offers you need to understand what JavaScript offers first. Starting with TS from the jump will lead you writing solutions in a completely OOP way. Which misses the point of using a lighter server-side scripting runtime like Node.

TypeScript brings a lot to the table on top of what JavaScript already does.

Sarah Ksiyer
Full stack developer by day and a stickler for writing clean code. My blog is mine and so are my views.
Remember to rest. There's more to life than code.
#productivity #career
A good alternative to stop using Google Analytics
#discuss #solomaker
Nobody talks about this in the IT world
#beginners #productivity #programming #discuss

Once suspended, sarahk will not be able to comment or publish posts until their suspension is removed.

Once unsuspended, sarahk will be able to comment and publish posts again.

Once unpublished, all posts by sarahk will become hidden and only accessible to themselves.

If sarahk is not suspended, they can still re-publish their posts from their dashboard.