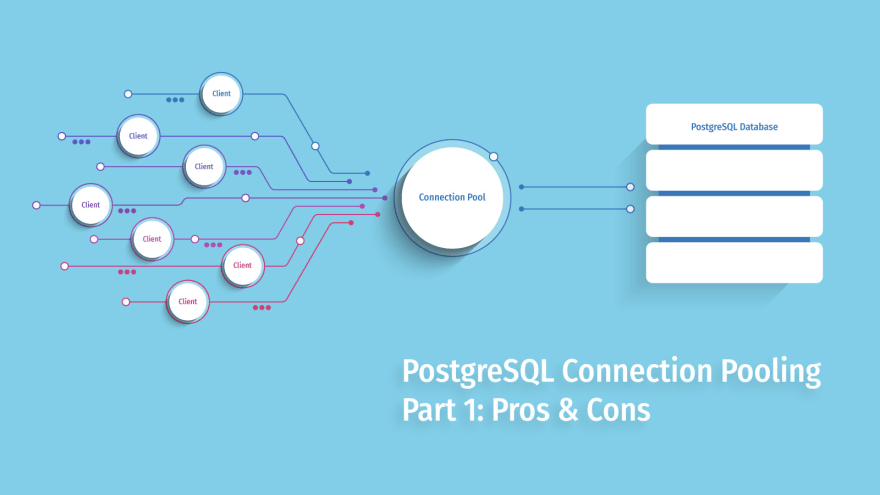 A long time ago, in a galaxy far far away, ‘threads’ were a programming novelty rarely used and seldom trusted. In that environment, the first PostgreSQL developers decided forking a process for each connection to the database is the safest choice. It would be a shame if your database crashed, after all.

Since then, a lot of water has flown under that bridge, but the PostgreSQL community has stuck by their original decision. It is difficult to fault their argument - as it's absolutely true that:

However, in modern web applications, clients tend to open a lot of connections. Developers are often strongly discouraged from holding a database connection while other operations take place. “Open a connection as late as possible, close a connection as soon as possible”. But that causes a problem with PostgreSQL’s architecture - forking a process becomes expensive when transactions are very short, as the common wisdom dictates they should be. In this post, we cover the pros and cons of PostgreSQL connection pooling.

Using a modern language library does reduce the problem somewhat - connection pooling is an essential feature of most popular database-access libraries. It ensures ‘closed’ connections are not really closed, but returned to a pool, and ‘opening’ a new connection returns the same ‘physical connection’ back, reducing the actual forking on the PostgreSQL side.

The architecture of a generic connection-pool

However, modern web applications are rarely monolithic, and often use multiple languages and technologies. Using a connection pool in each module is hardly efficient:

As a result, popular middlewares have been developed for PostgreSQL. These sit between the database and the clients, sometimes on a seperate server (physical or virtual) and sometimes on the same box, and create a pool that clients can connect to. These middleware are:

A connection pooler is an almost indispensable part of a production-ready PostgreSQL setup. While there is plenty of well-documented benefits to using a connection pooler, there are some arguments to be made against using one:

Should You Use a PostgreSQL Connection Pooler?

However, all of these problems are well-discussed in the PostgreSQL community, and mitigation strategies ensure the pros of a connection pooler far exceed their cons. Our tests show that even a small number of clients can significantly benefit from using a connection pooler. They are well worth the added configuration and maintenance effort.

Create and Seed Your Postgres Database in Minutes with Docker