Phil Karlton once said there are only two hard things in computer science: "cache invalidation and naming things" and it's because of the latter that we have so many weird and wonderful names in technology. In this post I'm going to explore the names of a handful of common programming languages, revealing why they were chosen and where the words came from.

Perl was created by American developer Larry Wall in 1987. He initially chose the name Pearl because he felt it was short and memorable word with positive associations. However, as there was an existing language with the name, he changed the spelling to Perl. One existing backronym (an acronym created after the name) for Perl is Practical Extraction and Reporting Language. The word pearl came via the Old French perle meaning 'a bead' or 'something valuable' and the Latin perna meaning 'leg' which extends to the name of a mollusc apparently shaped like a leg of mutton.

Ruby, the language the Dev.to site was developed with, was created by Japanese developer Yukihiro "Matz" Matsumoto in the 1990s. Influenced by Perl, he also wanted to use the name of a precious stone and choose Ruby because it was the birthstone of a colleague and the next birthstone in the monthly sequence after Perl: June's is pearl and July's is ruby. The word ruby comes from the Old French rubi meaning a 'reddish precious stone' from the Latin rubeus meaning 'red'.

Dutch programmer Guido van Rossum designed Python in 1991, naming it after the British television comedy Monty Python's Flying Circus because he was reading the show's scripts at the time. He wanted a name that was "short, unique and slightly mysterious". The word python comes from the ancient Greek Puthón, the name of a huge serpent killed by the god Apollo. It has been used to refer to various large, heavy-bodied, non-venomous snakes that constrict their prey since the early 19th century.

Java was designed by James Gosling while he was working at Sun Microsystems in the early 1990s. The project was initially called 'Oak' before a highly caffeinated brainstorming session produced the name 'Java' (although they very nearly went with 'Silk'). Java, or Jawa in Indonesian, is the name of a large island in Indonesia that produces strong, dark and sweet coffee. It’s name can be traced back to the Sanskrit word yavadvip, yava meaning ‘barley’ and dvipa meaning ‘island’. Java has been a slang term for coffee in the United States since the 1800s.

Kotlin, the language released by JetBrains in 2011, takes its name from Kotlin Island in Russia. The team wanted to use an island name like Java had - although it was technically named after the coffee rather than the island! Kotlin (Котлин in Russian) used to be part of Sweden and was known as Kettusaari by the Finns, meaning 'fox island', and Ketlingen by the Swedes, which possibly stems from the lower German kettel meaning 'cauldron'. After Peter the Great and his Russian forces won control of the island in 1703 it was renamed Kotling, later shortened to Kotlin. 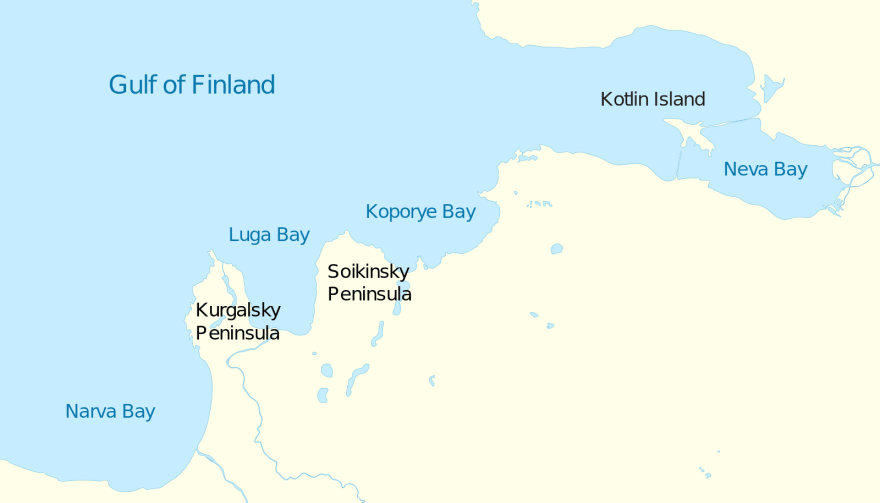 There is no clear answer to why Apple chose the name Swift but it's definitely not named after Taylor Swift as someone asked on Quora! My guess is they wanted to give the impression of something fast. The word swift means 'moving with great speed or velocity' and can be traced back to the prehistoric swipt- meaning to 'move in a sweeping manner'. The swallow-like bird became known as a swift from the 17th century and is used as the programming language's logo.

If you found this interesting, I've posted an infographic of the origins of more programming languages here. See low-res version below: 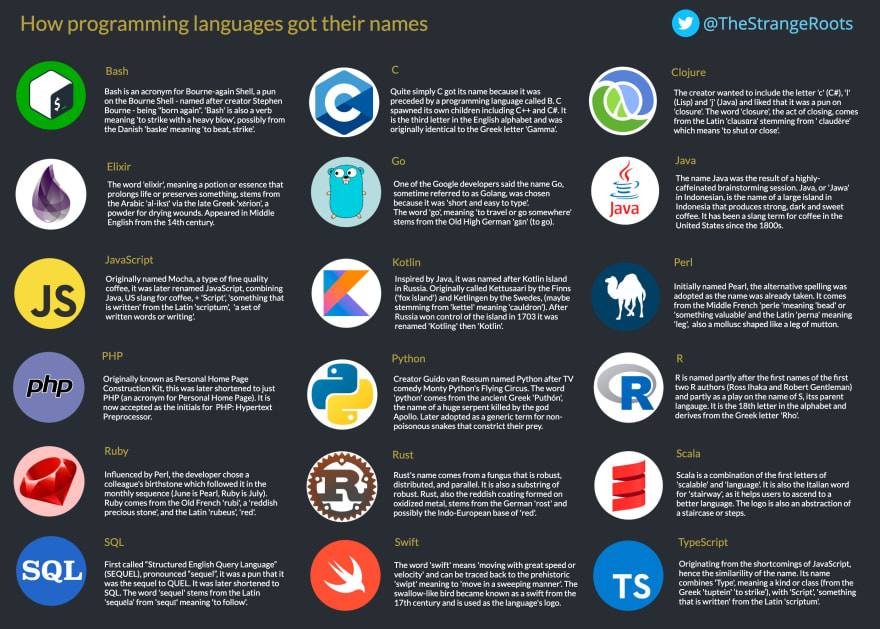 You can follow me on Twitter at @TheStrangeRoots for Tweets about the origin of different words used in technology.

Once suspended, scottydocs will not be able to comment or publish posts until their suspension is removed.

Once unsuspended, scottydocs will be able to comment and publish posts again.

Once unpublished, all posts by scottydocs will become hidden and only accessible to themselves.

If scottydocs is not suspended, they can still re-publish their posts from their dashboard.

Once unpublished, this post will become invisible to the public and only accessible to James.Scott.

Thanks for keeping DEV Community 👩‍💻👨‍💻 safe. Here is what you can do to flag scottydocs:

Unflagging scottydocs will restore default visibility to their posts.