It's hard to think of a web or mobile application in 2019 that doesn't have at least one feed or list component. Whether it's for a news feed, search results page, or tabbed-out list of resources, different methods of pagination are constantly being used. One of the most popular pagination experiences is the infamously addictive Infinite Scroll.

Imagine that you're working on a popular news app. There are 10,000's of articles in the archives and dozens being published every day. The news feed in your app sorts articles by publishing date so that the newest appear first. However, sorted or not, if the feed loads ALL articles every time a user opens their app, the infinite scroll feed would instead be an infinite load feed and everyone would be sad.

This is where pagination, in its various forms, comes to save the day. Instead of your feed loading ALL of the news, it's able to quickly request – for example – the 25 most recent articles. Then when the user requests more news the feed will fetch articles 26 through 50 and so on. This makes sure that response times are quick and there is never too much data being needlessly transferred.

Rather just play with the code yourself? it's live on CodeSandbox! Feel free to check it out.

So with all of that babel in mind, let's actually build an infinite scroll component using VueJS and a GraphQL API. You'll likely be able to re-use the final component in any of your VueJS projects, so think of it as a new tool in your toolbox once done!

This tutorial assumes that you are:

The most under-valued and epic (in my humble opinion) Vue feature is instant prototyping. What does that mean? It means that without having to set up an entire Vue project you can develop a single component in isolation.

This will let us (almost) immediately jump into developing our component, so let's install it during our short set up section.

Installing the CLI and dependences

First, we're going to install the Vue CLI and an extra extension package that gives us the ability to use instant prototyping.

Next, create a new directory on your computer and call it whatever you'd like. Here we'll write all the code for our component.

Finally, we're going to want to initialize a new NPM project in both the root and examples directory. When doing this, just accept all the defaults before installing the project's dependencies.

Voila! If only setup was always that easy...

With instant prototyping we can now run vue serve FILE_NAME and it will spin up the development server for that single file. Try it! You will probably be... potentially underwhelmed since our files are still empty 🙃

That said before we start writing our Vue components we're going to set up the GraphQL API. Why? Because it is SO MUCH MORE FUN developing when there's data. Hopefully, you agree!

Setting up a GraphQL API on 8base

There are many different ways to accomplish setting up a GraphQL server and API. However, we'll use 8base so that everything is extremely quick to set up and super stable. To get started, we'll only need to take the following few steps.

If you have an existing account, visit your 8base Dashboard and select an existing Workspace. If you don’t have an account, create one on 8base. Their free plan will work for what we need.

In the workspace, navigate to the Data Builder page and click on “+ Add Table” to start building the data model. Were going to create just one called Articles with the following fields.

Let's add some dummy records to our database. I've uploaded a DummyData.csv file. Save it and then open the Data tab that's right next to the Schema tab in the 8base Data Builder. 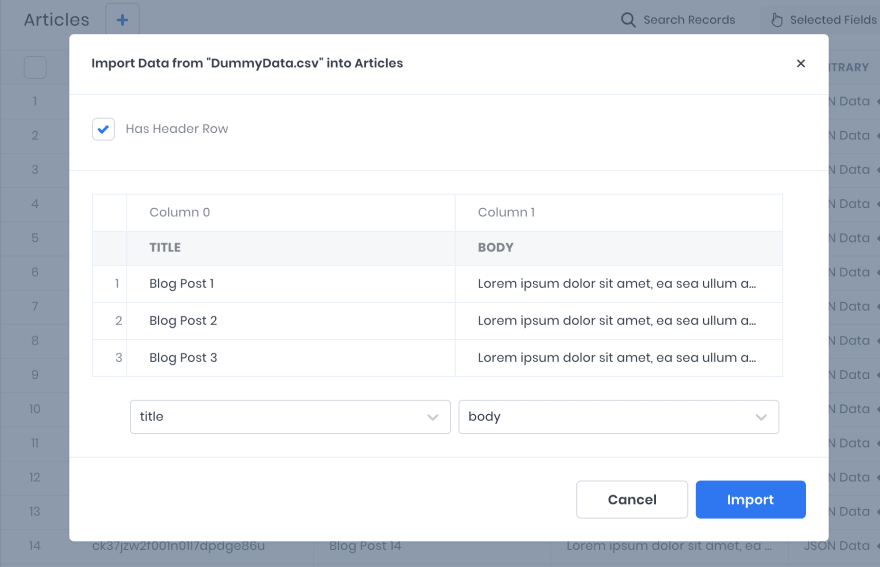 On the far right of the Data Viewer there is a dropdown with an Import CSV option. Select the DummyData.csv file from your downloads folder and make sure to specify "Has Header Row" in the modal that appears. You might need to map the column names to the appropriate table fields. However, once done, the import should only take a few seconds.

To allow our app to securely access the 8base GraphQL API with appropriate permissions were going to create an API Token with a custom role attached. Navigate to Settings > Roles and create a new role with the name "FeedAppClientRole". Once created, click the role to update its permissions.

Here we can update what permissions the FeedAppClientRole is allowed. In our case, we ONLY want it to be able to query/read articles. Let's check/uncheck the appropriate boxes to enforce that.

Now we need to attach this role to an API Token that can be added to our app. Navigate to Settings > API Tokens and add a new token by giving it a name and selecting under "Roles" the FeedAppClientRole that we just created.

Make sure to copy the API token once created! You won't be able to view it again.

5) Getting the Workspace API Endpoint

Finally, let’s copy our workspace’s API endpoint. This endpoint is unique to our workspace and is where we will send all of our GraphQL queries for new records.

There are a few ways to obtain the endpoint. However, just navigate to the workspace Home page and you’ll find the endpoint in the bottom left.

6) Testing that it works!

We should probably test that our API is properly set up before we keep going. How, you might ask? By querying it! Instead of setting up or using some GraphQL client, let's just run a good 'ol fashion curl command in our terminal and view the response.

Make sure to replace <YOUR_API_ENDPOINT> with your workspace API endpoint and <YOUR_API_TOKEN> with the API Token you created.

Does the JSON response show a list of article titles? Woo hoo! Nice work. We're now ready to keep cruizing and move into the creating the component.

Setting up the component

So, let's quickly list out what our infinite scroll component is going to have to do. That way we'll be able to think more clearly about the steps we need to take.

With these bullets in mind, let's add some code to our files so that we have a structure to work with.

Again, the reason that we have the examples/default.vue file is so we can import the component being developed like we would in a full application. Go ahead and run vue serve examples/default.vue – or vue serve default.vue, if you're already in the examples directory. This will spin up the instant prototyping development server. You may see some errors while making incremental file updates; just ignore them for now.

Per our simple spec, we want an infinite scroll component that fetches a specified number of records from a GraphQL API. Additionally, we want to be able to specify a template that will get rendered for each record that's fetched.

With that in mind, let's create an example of how we'd like to use our component. Always read the in-code comments!

Sweet! We essentially just typed out how we'd like to use our InfiniteScroll component. It looks pretty intuitive, right? Now we have to ACTUALLY BUILD IT... Before that though, let's add the <script> tag to our examples/default.vue file so that all the named data values are present.

Just place the following code right below the <template> tag and the comments!

Nice work! Our examples/default.vue component is set up. Make sure that you updated the endpoint and apiToken values with those from your workspace.

Now it's time for the actual InfiniteScroll component. Similarly to the last component, let's start with the <template> and <style> tags. Infinite scrolling does require some functional styling.

I know. It's almost frustratingly simple, right? However, why make something more complex than it has to be? All we want to do is template every record fetched from our API, as well as know when to fetch more of them. That is what this does.

So, let's now add the <script> tag that will make everything actually work.

Naturally, this part is a little bit meatier than the others. That said, there are really only several things worth pointing out; the in-code documentation should handle the rest.

First off, we initialize the GraphQLClient and conditionally pass it headers depending on whether or not an authToken was passed. The initialized client is what gets used in the loadBatch method to execute GraphQL calls to our API. It uses the required query prop, which receives the skip and limit variables.

The skip and limit variables are what the articlesList query requires to handle pagination. While limit simply represents how many records to load per request, skip specifies how many records have already been loaded – or from which index in the list to slice. Thus, if we initially fetch records A, B, and C from our API with limit = 3, skip = 0, and then on the following request specify limit = 3, skip = 3, we'll receive records D, E, and F.

Lastly, let's look at the handleScroll method. This is that callback method for the @scroll event. By unpacking the passed event argument we get access to the scrollTop, clientHeight, and scrollHeight values. The clientHeight is a fixed value that represents the height of the scrollable element in pixels. Meanwhile, scrollTop is changing on every scroll event to represent the distance from the top of the scroll container to the current position.

If the clientHeight plus scrollTop is greater than to or equal to the scrollHeight (the scrollable height of the element in pixels) then we know the container has been fully scrolled! 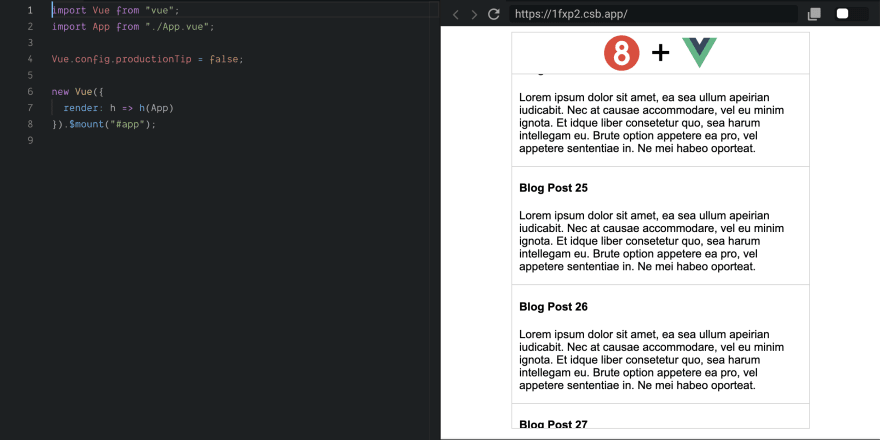 Wondering why your component isn't appearing in the browser (http://localhost:8080)? We didn't export it!

Update the index.js file with the following:

Wrap up and some other fun stuff

Our pagination component is done! It can now be used with any Vue project with any GraphQL API. The component should be rendering out the records in the browser. If not, check out the errors and let me know if something is acting funky!

Additionally, if you're interested in building a full pagination component (tabs with navigation) as opposed to an infinite scroll. Check out this Pagination in Vue.js article by Denny Hendrick.

With that said, here is the tutorial's GitHub repository with examples

CloudWatch RUM for all insights