It's not a secret, Git doesn't handle large files well:

Indeed. The git architecture simply sucks for big objects. It was discussed somewhat during the early stages, but a lot of it really is pretty fundamental. (Linus Torvalds)

Have you ever committed a few 100 MBs file to then realize it's part of the repo now and it would take quite an effort to carve it out and fix the repo: 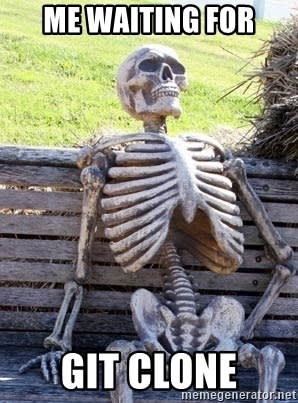 Git clone takes hours, regular operations might take minutes instead of seconds - not the best idea indeed. And still, there are a lot of cases where we want to have a large file versioned in our repo - from game development to data science where we want to handle large datasets, videos, etc.

So, let's see what open-source and Git-compatible options do we have to deal with this:

You can read (a somewhat outdated) overview of LFS and annex tools here, but this time I want to show you how the workflow looks like with DVC (yes! I'm one of the maintainers).

After DVC is installed all we need to do is to run dvc add and set a storage you'd like to use to store your large files.

Let's try it right here and there, first we need a dummy repo:

The workflow is similar to Git, but instead of git add and git push we run dvc add and dvc push when we want to save a large file:

Now, let's save it somewhere (we use Google Drive here, but it can be AWS S3, Google Cloud, local directory, and many other storage options):

You'd need to create the Storage directory in your Google Drive UI first and dvc push will ask you to give it access to your storage. It is absolutely safe! - credentials are saved on your local machine in the .dvc/tmp/gdrive-user-credentials.json, no access given outside.

Now, we can do git commit to save DVC files instead of a large file itself (you can run dvc status to see that large-file is not handled and visible by Git anymore):

That's it for today, next time we'll see how did it work, what does large-file.dvc mean, why does it create .gitignore and how can we get our file back!

Throwing around text - Kinetic typography part 3: The Walking Text that follows you 🧟🧟