Over the years, I have struggled to get past the corporate proxy, i.e. access to the internet was blocked because proxy details weren't set up properly. Usually, most software documentation wouldn't provide these details handy and one has search thru documentation. These are useless battles a developer has to fight in order to win the war. 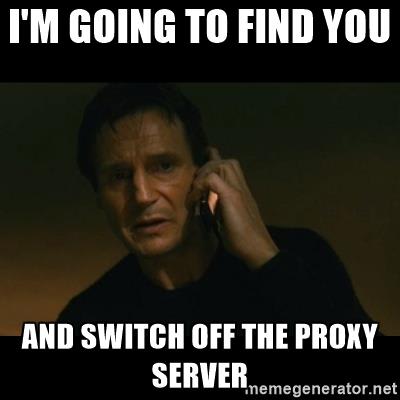 I wish I could do what Liam Neeson does! But I have been able to win some of my battles and have accumulated some ammunition for a short post which might come handy to many in a similar situation. Here I list down some ways to set up proxy details in the following scenarios:

Running Vagrant behind the proxy

Set up the proxy in your guest OS

This depends on the guest OS. I use Ubuntu, so I find updating /etc/environment file with proxy details as an easy option.

With this plugin, you can setup the proxy details right into the Vagrantfile. To install the plugin run the following command on your shell:

If you are not able to download the plugin behind the corporate proxy (duh!), then you can download the gem file from Ruby Gems site and use the following command to install the plugin.

and add following to the Vagrantfile:

Now you should be able to access the internet from your vagrant guest.1

When you are working on docker behind the proxy, it becomes important that you ensure proxy settings are passed and are available at different stages - for example, image creation, container execution, and running services. There are different command options for either of these scenarios.

Setting proxy while building an image

You might want to download some software while building your image so that every container has it pre-installed. While you can hardcode the proxy details as environment variables in the Dockerfile, it isn't the recommended way of doing so. It hampers the portability of the image and unnecessarily gives the container created by the image access to the internet. The better option would be to pass the proxy information while building the image using build-arg option as shown below:

Setting up proxy when running the container

Again as mentioned above, it isn't advisable to setup proxy details in the image or to enter each new container to setup proxy details. Docker provides a better way to do so using the -e or --env options with the run command. This option can be used to pass the proxy setting as environment variables to the container.

Notice the difference between two commands above. If http_proxy is already defined on the docker host, we can directly pass its value to the container by just passing the name of the variable to -e options as shown on line#(1) above. If you want to provide an alternate value you can pass name=value pair as shown in line#(2) above. Finally, you can also set up all the proxy variables in a file and use the --env-file option to pass all of them at once.

While the steps described above will come handy when you are experimenting with your images and containers. Once you have finalized your container and image details, the best approach would be to create a compose file for your service which would build the image. Docker compose allows you to pass the environment details easily using the args instruction. You just need to mention the name of the proxy environment variables as shown below:

So these are the corporate proxy battles that I have fought and won somehow. A long time back, I had a hard time getting thru an NTLM-based proxy. But a cool tool called CNTLM saved my day. However, I don't have the scenario or the steps handy to add to this article.

One thing is for sure, once you have resolved such issues, you can quickly identify a similar issue with a new software. I would add to this article when I fight and win more such battles. I hope you this post helps you save some time.

How to delete a Kubernetes namespace stuck at Terminating Status

Once suspended, shriharshmishra will not be able to comment or publish posts until their suspension is removed.

Once unsuspended, shriharshmishra will be able to comment and publish posts again.

Once unpublished, all posts by shriharshmishra will become hidden and only accessible to themselves.

If shriharshmishra is not suspended, they can still re-publish their posts from their dashboard.

Once unpublished, this post will become invisible to the public and only accessible to Shriharsh.

Thanks for keeping DEV Community 👩‍💻👨‍💻 safe. Here is what you can do to flag shriharshmishra:

Unflagging shriharshmishra will restore default visibility to their posts.