In this post we will be discussing about one of the most popular, most used and fast-growing web framework tools.

2. Why to use Django as a backend framework?

3. What are the advantages of using Django Framework?

4. Popular companies that use Django

Django is a high-level open-source Python web framework that allows you to develop web pages rapidly. Its main goals are simplicity, flexibility, reliability, and scalability.

Why to use Django as a backend framework?

Written in Python Language:As mentioned Django is written in Python. Python language is simple to learn and easy to implement. Python manages more in fewer lines with large libraries.

ORM Support:It provides ORM (Object Relational mapping) to work with the database so, you would not be required to write SQL queries to perform database operations.

Administrative Interface:The administration interface provided by Django is simple to create and one of the key advantages of using a framework. It gives you a fully-featured admin interface.

Popular companies that use Django: 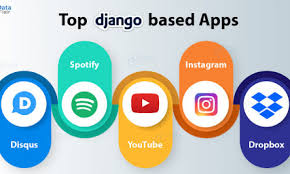 I can refer this from my own experience Django provides the best documentation out there where it takes you, step-by-step in making a polling app.
It is a readable and self explanatory documentation, you all can refer it through this link - https://docs.djangoproject.com/en/3.2/

Django is a great addition to projects that need to handle large volumes of content (e.g., media files), user interactions or heavy traffic, or deal with complex functions or technology (e.g., machine learning). Yet it is simple enough for smaller-scale projects, or if you intend to scale your project to a much higher level. That’s why Django is used by so many companies that vary in size and goals.