I will try to explain the webpage rendering process in a browser in depth.

Once the server supplies the resources (HTML, CSS, JS, images, etc.) to the browser it undergoes the below process:

What is the internal structure of a web browser? 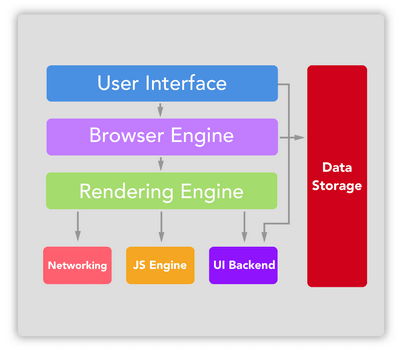 User interface: The user interface includes the address bar, back/forward button, bookmarking menu, etc. Every part of the browser display except the window where you see the requested page.

Browser engine: The browser engine marshals actions between the UI and the rendering engine.

Networking: The networking handles network calls such as HTTP requests, using different implementations for different platforms behind a platform-independent interface.

UI backend: The UI backend is used for drawing basic widgets like combo boxes and windows. This backend exposes a generic interface that is not platform-specific. Underneath it uses operating system user interface methods.

Data storage: The data storage is a persistence layer. The browser may need to save all sorts of data locally, such as cookies. Browsers also support storage mechanisms such as localStorage, IndexedDB, WebSQL, and FileSystem.