First, let me introduce myself. I am Sondre, a web developer from Norway. At least that’s what I want to become🙂

I posted my goals for 2021 on Twitter, so this was actually going to be a post about that, but it became more like a timeline from I was 12 years old until now.

My first experience with websites

The first time I created a website was back in 2000/2001. I was about 12 years old. Me and a couple of friends had just started playing Counter-Strike and we needed a website for our clan.

After some “research”, I found a CD with a copy of Microsoft FrontPage.

Microsoft FrontPage is a discontinued WYSIWYG HTML editor and website administration tool from Microsoft for the Microsoft Windows line of operating systems.

Microsoft FrontPage was my first introduction to making websites. It wasn’t easy to work with. Not for a twelve-year-old.

So after learning how to create websites in FrontPage, I had to figure out how to get them to the World Wide Web.

I think I used every free web host that existed at the time. Geocities, Angelfire, and Homestead are some that I remember.

Leveling up my skills

2-3 years later, a friend of mine introduced me to an editor named Coffee Cup and W3Schools. 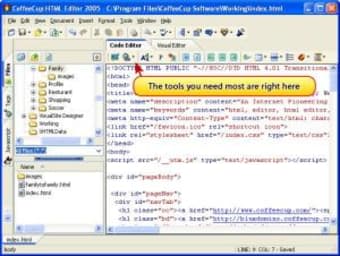 Now I was starting to learn how to write HTML and create more “advanced” websites.

I and my friend started working on a new website for our Counter-Strike clan. And he told me about this thing called PHP, and if we learned it, we could update the site online, in the browser!

How cool is that?

I remember our first little project. We wanted an easier way to update the world about our clan. So we made this news script or plugin if you will.

We didn’t use any kind of database. You didn’t need to login, so anyone with the correct URL could post on the site. And every time we wrote something, it was stored in a single .txt file on the server.

I had now discovered paid hosting and got my own .net domain and made a personal website. It was way too personal when I think of it. I believe I used my full name, address, and phone number 😂

But who cares? I was this cool kid (That’s what I thought, anyway.) with his own website and I could share with everyone what kind of music I was listening to.

I also had this really cool page view counter that was updated whenever the page was refreshed.

And of course, I had to make a new design at least once every single month!

Starting over and getting overwhelmed

Ten years later, in 2016. My interest in computers and the web came back and I subscribed to Team Treehouse and started the web development path.

I discovered Bootstrap and other CSS frameworks. Responsive web design. And JavaScript is a thing now?!

What is all this?

I had used JavaScript a little before. But that was to make the scroll bar on the website black. Just because it was cool.

And I thought I knew how to do responsive web design. Heck! I did that 10 years ago with XHTML!

But no, that was not responsive web design. That was just simplifying websites for mobile devices and reduce load time.

The course on Treehouse was using Bootstrap and I was amazed by the power of Bootstrap and how easy it was to just throw up a design and start working.

But it was everything else that scared me. JavaScript, react, angular, vue, Mongoose, mongo, and all this new stuff.

It was just too much. It was overwhelming.

But I continued learning CSS, bootstrap, and some basic JavaScript.

I really wanted to become a web developer and start my own business. But as always, life got in the way. I continued working my boring nine-to-five job because it was a safe and stable income. And two years earlier I had become a father.

I recently quit my job due to health issues.

I needed to find a job where I have the chance to work from home. But I’ve only done physical heavy labor, and I had already used 3-4 months figuring out what to do.

In January I decided to pursue my goal of becoming a web developer. Because making websites was something that I really enjoyed, and I still do!

When I'm learning to code, or making small side projects while learning, I just feel really relaxed. And I know that this is something that I want to work with!

I’ve taken some courses on Udemy and freeCodeCamp to refresh my HTML and CSS skills.

The courses have sections on JavaScript too, and that’s something that I’ve started to love.

My first thought, when I started this year was to just become a frontend developer. Since then I have realized that I want to learn more.

I want to become a full-stack developer!

Once suspended, sondre will not be able to comment or publish posts until their suspension is removed.

Once unsuspended, sondre will be able to comment and publish posts again.

Once unpublished, all posts by sondre will become hidden and only accessible to themselves.

If sondre is not suspended, they can still re-publish their posts from their dashboard.

Once unpublished, this post will become invisible to the public and only accessible to Sondre.

Thanks for keeping DEV Community 👩‍💻👨‍💻 safe. Here is what you can do to flag sondre:

Unflagging sondre will restore default visibility to their posts.