Securing your infrastructure is critical for the success of your business. Failure to take security seriously can result in major damage including fines, loss of customer confidence, or the inability to carry out crucial business functions. The growth of Infrastructure as Code tools and CI/CD systems has allowed developers to integrate infrastructure management into our typical development workflows, improving quality and delivery speed.

At the same time, in order to manage your infrastructure, the CI/CD system used needs access to sensitive credentials. At Spacelift, we aim to give our users the maximum balance between flexibility and security. Because of this, we provide multiple options for connecting your Azure subscriptions to Azure, including setting static credentials, using our fully managed integration, as well as utilizing private workers to avoid sharing credentials at all.

In this post I wanted to give you an overview of how the Spacelift Azure integration works from a technical perspective, as well as discuss some of the issues we encountered and solved while designing and developing it. As a CI/CD system, we do quite a lot of work to integrate with other systems that our users use. Occasionally, like in the case of Azure, things get non-trivial. If you’re keen to learn more, read on, no Azure knowledge required!

Let’s start with a quick description of how our cloud integrations work. The overall workflow is very simple, and looks something like this: 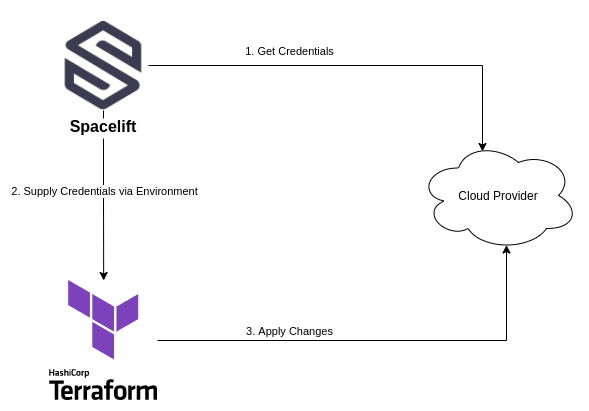 Breaking the requirements down, we need to be able to get management credentials for a user’s cloud provider account and pass them to Terraform via environment variables, at which point Terraform can run an apply with access to the customer’s infrastructure.

Note: For simplicity this post uses Terraform in all its examples, but this overall approach also applies to the other tools that we support, for example, Pulumi.

The concept behind the Azure integration was to provide a similar experience to our AWS and GCP integrations, but for our Azure customers. The following diagram shows a simplified outline of how the AWS integration works:

AWS provides the ability to temporarily assume a role in another AWS account. This allows our users to create a role in IAM with any permissions they might want to give Spacelift. They can then set up a trust relationship for this role with our AWS account, which will allow our AWS account to assume the role. Role assumption provides us with raw AWS credentials and works seamlessly with any AWS tooling, including the Terraform AWS provider. It additionally allows us to specify the validity duration, so each run can get its own credentials which are constrained to a short period of time.

Although Azure doesn’t have the same capability, it provides another approach called Azure Active Directory Applications, that allow service accounts to be created. Azure AD Applications are the resources that allow Spacelift to seamlessly manage access to a customer’s Azure resources.

It’s worth explaining a few pieces of terminology that are used throughout the rest of this post:

We set a number of goals for the integration:

Initially, our idea was to create a single multi-tenant AD Application: 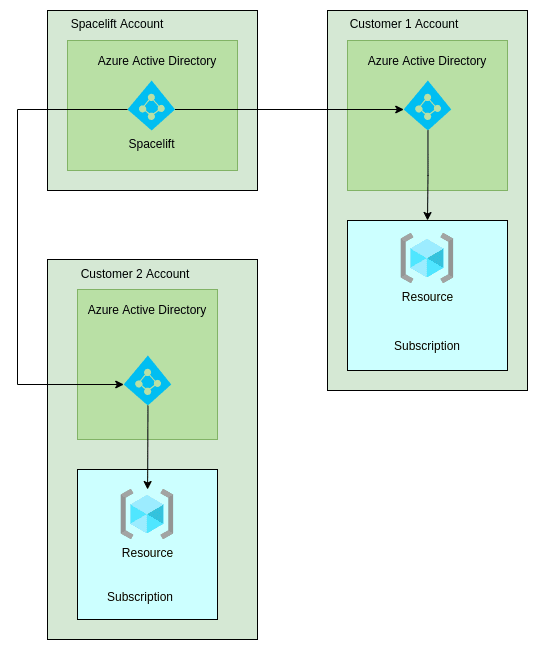 The idea was that we would generate an Access Token that could only be used for a specific customer directory, and pass that token to the Terraform Azure RM provider during runs. In the end, we had to revise our approach because of the following issues:

After days of brainstorming on an alternative approach, we came up with a new architecture. We could programmatically generate a new Azure AD Application on our side for each Azure Integration created by Spacelift users. This way, having access to the credentials for an Azure AD Application would only lead to having access to a single Azure AD Tenant on a user’s side. This approach allows Client Secrets to be passed to Spacelift runs without fear of inter-user permission leakage. The final design ended up as shown in the following diagram: 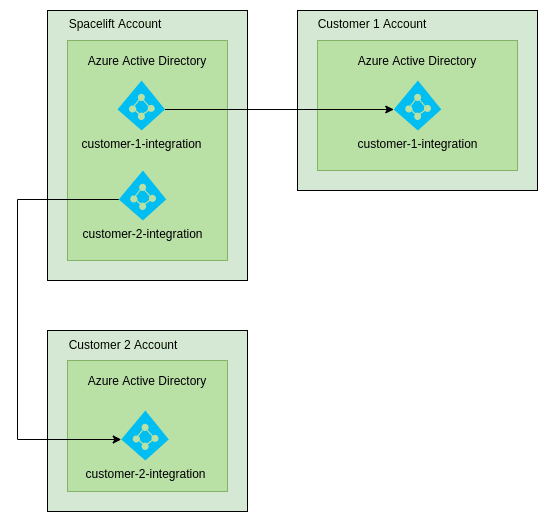 Applications are installed into a customer’s Active Directory tenant via a process called Admin Consent. After admin consent has been completed, a Service Principal is created in the user’s Azure Active Directory to which the user can grant permissions. This allows users to decide the exact level of access that Spacelift has to their resources.

The next issue we faced was related to generating credentials for a run. As described in the provider documentation, the Azure RM provider can be configured by setting certain environment variables. Initially, we took a basic approach of attempting to generate credentials during a Spacelift run. This is what we do for our AWS and GCP integrations, so we weren’t expecting major issues. The steps taken looked something like this:

This seemed to work… but only some of the time.

While testing the integration, strange things were happening. As an example, the planning phase for a run would succeed, but the apply would fail with a permissions error from Azure. After investigating, we came to the conclusion that this was being caused by eventual consistency in Azure AD.

You can visualize the problem using the following diagram (note: this is just an illustration, and is not meant to be completely accurate): 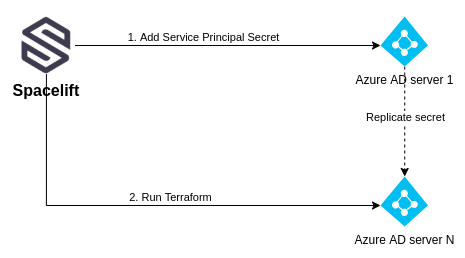 In the example above, step 2 may succeed or fail depending on whether the secret has managed to replicate to the Azure AD server that its request is routed to. Initially, we attempted to test whether or not the secret was usable by making an API request, and retrying until the request succeeded using an exponential backoff. What we soon realized was that even then, subsequent requests could be routed to a different Azure AD instance, which still hasn’t received the new Client Secret, and potentially fail.

Even if it was possible to verify when the secret was fully replicated, waiting for replication to complete would have added a minimum of 30 seconds, and potentially another several minutes. Because of this, we decided to move credential generation and rotation out of the run flow, and into a scheduled task:

The scheduled task runs once per hour, generates secrets with an expiry of 24 hours, and attempts to generate a new secret for an integration roughly 2 hours before expiry of the old secret. This allows credential rotation while always keeping a valid secret.

When a new secret is generated, we use AWS’s Key Management Service to encrypt it so that it is never stored in plaintext.

When a run is triggered, we try to find the secret for the integration with the most amount of time until expiry. We also avoid using new secrets until roughly 10 minutes after generation to avoid the eventual consistency issues caused by Azure AD’s architecture.

You can visualize the secret lifecycle using the following diagram:

In addition, when creating a new integration we immediately generate a secret. This helps to ensure that the secret will have successfully propagated within Azure AD by the time a run is triggered.

Credential Rotation for the Integration

The last major issue we faced was figuring out how to implement credential rotation for our own management account. The integration itself uses an Azure AD Service Principal to manage customer AD Applications using the Microsoft Graph API. Because we run most of our own infrastructure in AWS, we didn’t have the option of using a Managed Service Identity, meaning that we needed to handle credential rotation ourselves. In addition, our goal was to automate the process to avoid developers having to periodically perform a manual task, and to reduce the risk of forgetting to renew the credentials before expiry. 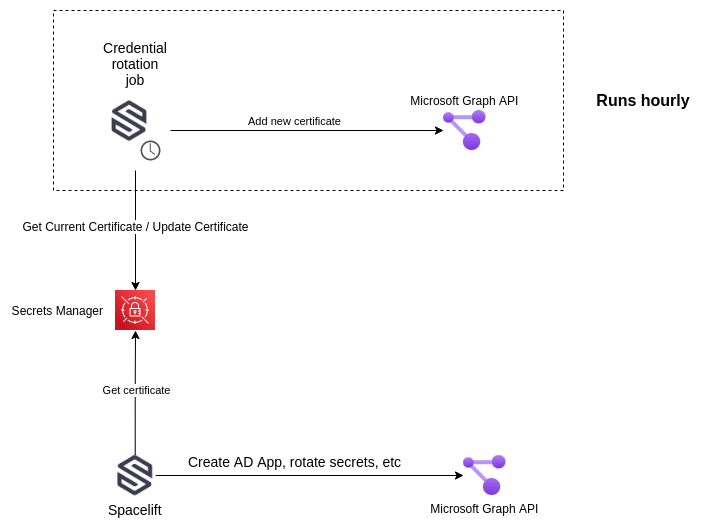 Similar to what happens with the integration client secrets, Secrets Manager uses AWS Key Management Service to encrypt the certificate at rest.

Hopefully, this post has given you a glimpse into the internals of Spacelift’s Azure integration, along with some of the problems we had to solve while implementing it. As you probably noticed, we’re willing to go to great lengths to ensure a secure and pleasant experience for our users. To find out more, take a look at our Azure integration documentation available at Spacelift Documentation.

Bundling YAMLs for Kubernetes with Helm

My Infrastructure as Code Rosetta Stone - Deploying the same web application on AWS ECS Fargate with CDK, Terraform and Pulumi

Once unpublished, this post will become invisible to the public and only accessible to Adam Connelly.

Thanks for keeping DEV Community 👩‍💻👨‍💻 safe. Here is what you can do to flag spacelift:

Unflagging spacelift will restore default visibility to their posts.