MiniRx Store is the new kid on the reactive state management block. MiniRx will help you to manage state at large scale (with Redux), but it also offers a simple form of state management: Feature Stores.

Let's get a quick overview:

MiniRx Store is a global, application-wide solution to manage state in JavaScript and TypeScript applications.

MiniRx is powered by RxJS and exposes state as RxJS Observables. The Observables emit when their selected state changes.

MiniRx is inspired by NgRx, which is a well known reactive Redux Store in the Angular world. MiniRx and NgRx look similar at first sight, but there are also important differences.

What do NgRx and MiniRx have in common?

What are the main differences?

And it is these differences which explain the name "MiniRx".

For simple features we can use Feature Stores. And Feature Stores can be quite powerful actually: You can use memoized selectors (if you want to), you can create effects for API calls (if you want to). MiniRx scales nicely with your needs.
And you can always fall back to the Redux API in case that you have to manage huge and complex state. 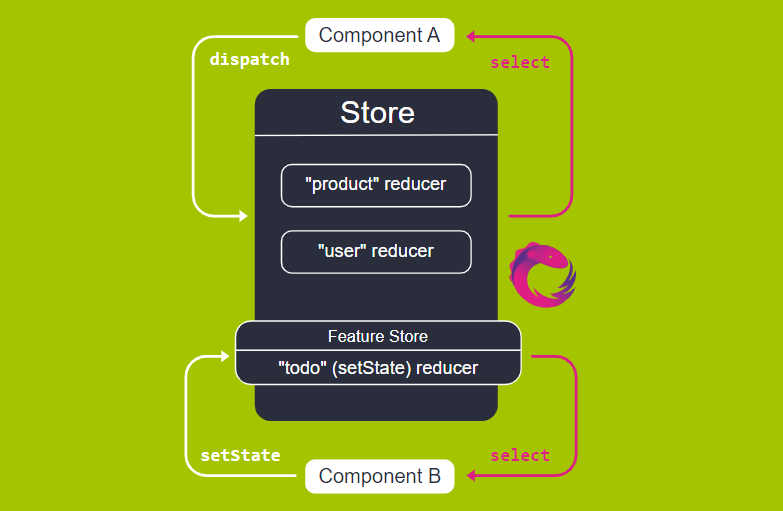 That was a long introduction! Let's dive into some code to see MiniRx in action...

MiniRx supports the classic Redux API with registering reducers and dispatching actions.
Observable state can be selected with memoized selectors.

Every new Feature Store will show up in the global state with the corresponding feature key (e.g. "counterFs"):

The Demo uses both the Redux API and the Feature Stores:

These popular Angular demo applications show the power of MiniRx:

Check out the docs for the full MiniRx API.

If you like MiniRx: Give it a ⭐ on GitHub

These projects, articles and courses helped and inspired me to create MiniRx: