A media and legal battle for the control and security of the personal data of European citizens has continued to grow since the start of the health crisis.

Many European companies storing personal data in their private data centers wish to benefit from the strength of the public cloud but find themselves confronted with human, cultural and sometimes legal conflicts over the choice between an American cloud leader and a European pure player cloud.

In this long series of posts, I invite you to discover how to find inner peace by building a multi-cloud environment 🇪🇺 🇺🇸 step by step. Keep personal data in a European cloud and entrust the operational part to an American cloud leader.

A complete proof of concept is included in this series.

Enterprises embrace multi-cloud. 93 percent of enterprises have a multi-cloud setup; 87 percent have a hybrid cloud strategy [1]

There are many motivations that lead companies to choose the multi-cloud option in their organization, among them:

Whatever the motivations, we must first think about the answers to these questions:

6 multi-cloud architecture options are proposed by Gregor Hohpe and well explained in his blog post [2]: 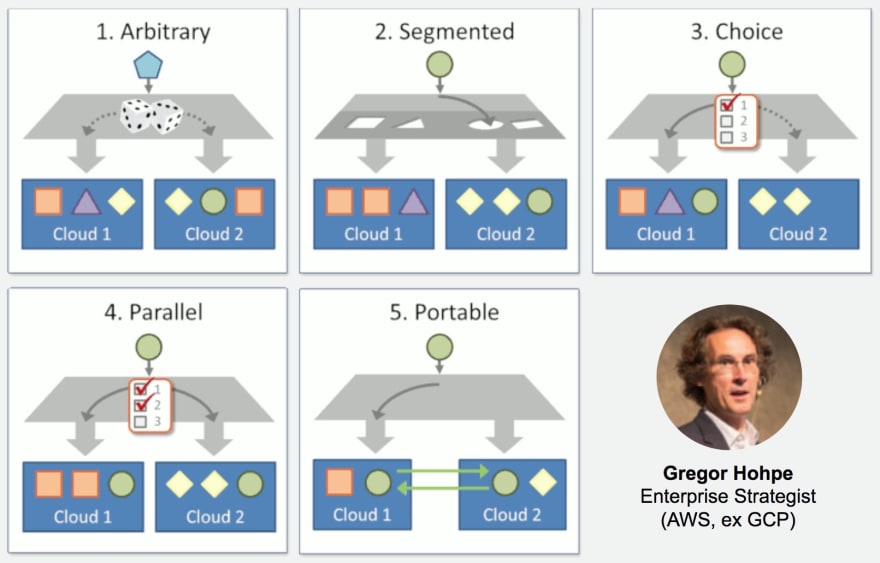 As we aim to separate operational workloads from business workloads, we will choose a Segmented Architecture.

In our case, we will have private workloads in Scaleway Elements and internet facing + operational workloads in Google Cloud.

By private workloads, I mean:

By internet facing and operational workloads, I see:

Let's see what kind of cloud architectures we can build with the strength of both.

When a network connection is established between both cloud providers using VPN as an example, each Cloud will treat the other as an on-premise environment. Neither GCP nor Scaleway will be aware of being part of a multi-cloud architecture but will know that they are in a hybrid cloud architecture.

This is the reason why Google Cloud describes multi-cloud as it describes hybrid cloud. [4]

In my last post, I talked about the best network topology suited for a hybrid cloud which is hub-and-spoke topology. Let's see how we can architecture that for a multi-cloud:

It's possible in Google Cloud to terminate user requests in front of a custom origin. With this option we can create a Load Balancer in GCP on top of Scaleway.[5]

If we consider some applications as non sensitives like front-end apps we can deploy them in Google Cloud and keep the sensitives apps in Scaleway. 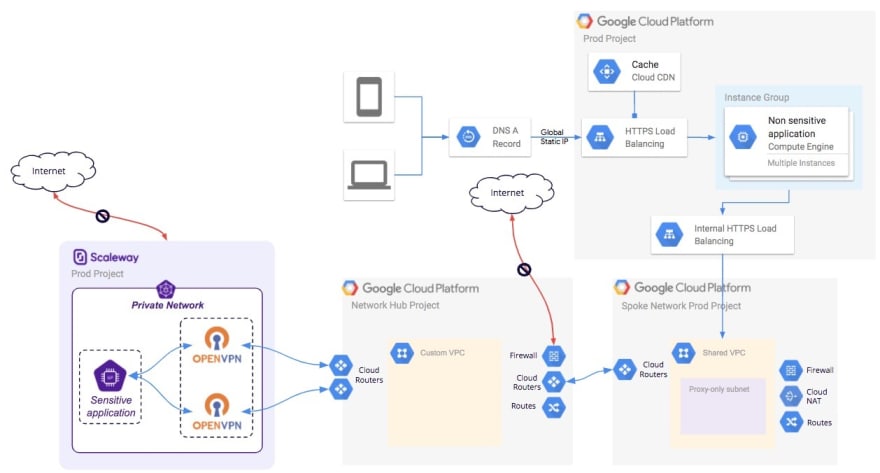 We started by the different network architectures that we could implement between both providers. Now we will see what security architectures we can choose to protect user datas.

Zero Trust approach can be used in Google Cloud to access the internal applications hosted in Scaleway. In Google Cloud this can be achieved using Identity Aware Proxy (IAP). [7]

To deploy Scaleway resources from a DevOps platform built in Google Cloud we will need to manage Scaleway credentials.

In the context of a multi-cloud we can manage those credentials in an open source tool like Vault.

The following diagram illustrate that usage:

Google Cloud supports Customer-Supplied Encryption Keys (CSEK) [9]. We can supply the encryption keys hosted in Scaleway to Google Cloud. Google will use those keys to protect the Google-generated keys used to encrypt and decrypt datas.

We can use DLP service of Google Cloud to anonymize our datas stored in Scaleway.

In this part we saw how to build a network infrastructure and implementing security patterns between Scaleway Elements and Google Cloud.

There are other patterns that I would have liked to present but the architectures are not drawn yet.

In the second part, we will discuss about monitoring/logging and DevOps architectures that could be applied between the two cloud providers. We will also start to architecture our proof of concept.

What is (not) Hexagonal Architecture

Thinking Like a Hacker: Stealing Secrets with a Malicious GitHub Action

Level 0 for the C4 model

Journey to the clean architecture for my flutter app

Once unpublished, this post will become invisible to the public and only accessible to Chabane R..

Thanks for keeping DEV Community 👩‍💻👨‍💻 safe. Here is what you can do to flag stack-labs:

Unflagging stack-labs will restore default visibility to their posts.