We saw in the part 1 how to build a network infrastructure and implementing security patterns between Scaleway Elements and Google Cloud.

In this part 2, we will discuss the monitoring/logging and DevOps architectures that could be applied to both cloud providers. We will also start to architecture our proof of concept.

We can gain visibility into Scaleway resources. There is two supported ways in Google Cloud [1]:

The second option is illustrated in the following diagram. 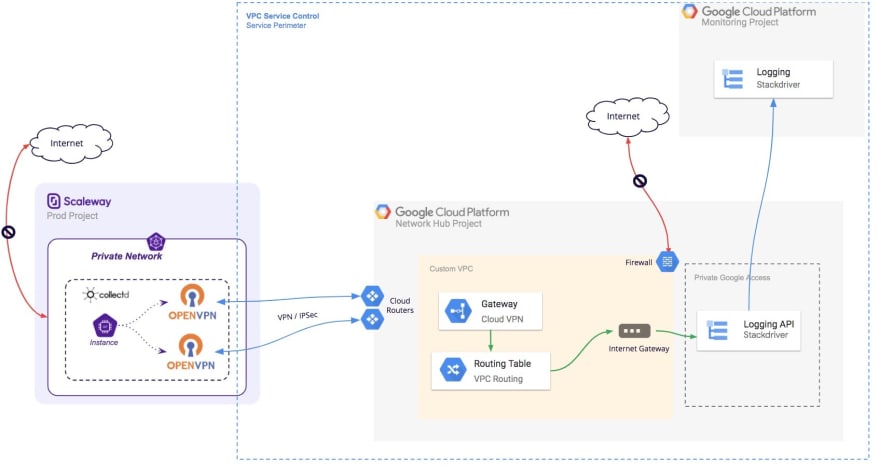 We can get metrics into Monitoring in the following two ways [2]:

The second option is illustrated in the following diagram. 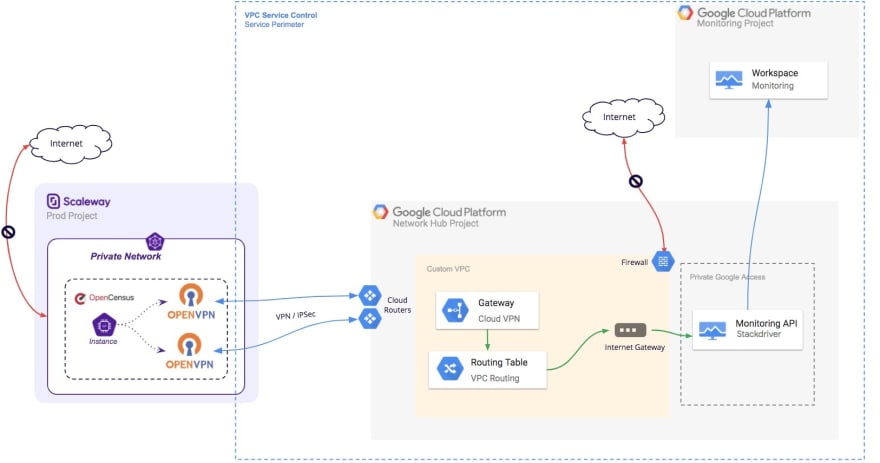 Many DevOps tools exist in the market. Let's take Gitlab as an example to deploy Scaleway resources with Gitlab runners.

For production use, I commonly recommend customers to use specific runners with jobs running in a GKE cluster.

In the following example, we illustrate the deployment of Scaleway resources and kubernetes workloads using GitOps practices. [3]

Segmented architecture being the best suited to our case, we need to control the network traffic to not incur excessive egress charges because half the application ends up left and the other half on the right. [5]

In the previous architectures we used two types of communications:

We could implement any of the segmented architectures presented in these two posts as a proof of concept.

We will see in the next parts, step by step, how we can implement a DevOps platform in a multi-cloud context. The following architecture is a simplified version of the GitOps integration explained previously.

In a multi-cloud environment, it's important to use the same technologies on each cloud.

As a Stacker, I have a favorite stack for deploying cloud infrastructure:

In this post, we discussed the monitoring/logging and DevOps architectures that could be applied to both cloud providers. We also talked about network traffic cost. We finished by laying the foundation stone of our POC.

In the part 3, we will see how to build a DevOps platform in Google Cloud with GitLab and Kubernetes.