2019 definitely seemed to be a pivotal year for the JAMstack. New companies cropped up (yep, us included), JAMstack_conf_sf was the biggest event yet and lots of new tools seemed to gain momentum daily. In this series of posts, we're asking some well-known members of the JAMstack community what they thought about this past year and what they think you can expect for the year to come. This edition features Raymond Camden. 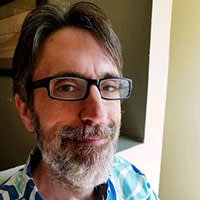 Check out the other interviews in this series:

Tell us about yourself and what you do? Does JAMstack play a role in your day-to-day work?

I'm a developer evangelist for a company called HERE. They do mapping, routing, and other location services for developers. We employ the JAMstack a bit (GitHub pages), but the JAMStack doesn't really play a part of my day to day, outside of using it for demos from time to time. I mainly work on JAMstack projects in my spare time.

In my career, I've seen it all. I started building HTML pages back in 95 or so, moved to the server-side with Perl and ColdFusion, and then switched to more client-side development roughly 7-8 years ago. Started using the JAMStack when it first began as just plain "static sites". Along with Brian Rinaldi, I'm an author of a book on the topic for O'Reilly. I blog about and present on the topic as well.

What is your current JAMstack stack? What tool(s) have you most excited?

For my blog, I use Jekyll. But I recently discovered Eleventy and I'm incredibly excited about it. I like Jekyll, but never liked working with Ruby, the fact that Eleventy is Node-based is a huge win for me. Also, Eleventy is incredibly flexible. Finally, Eleventy solves the "dynamic pages from data" issue in a way that no other SSG has handled as well. As I use more SSGs, I find that I prefer flexible engines over highly opinionated ones.

What changes did you see, for better or worse, in 2019 related to the JAMstack ecosystem?

2019 felt like the year "JAMstack", as a term, really came to the forefront. As I said earlier, I've been working with static site generators for a few years, but JAMStack is a much better term - much better marketing if you will - for what these solutions provide. I was also excited to see multiple static site hosting services add serverless natively to their platforms. While you could always use serverless before that, having it "baked in" makes the developer experience much better.

What changes in 2020 do you see forthcoming that will have an impact on adoption of or day-to-day development using the JAMstack?

I think we will continue to see additional services added to hosting providers. For example, Netlify adding analytics felt like a natural fit. I also think we will see better competition from the bigger players. So for example, you can do a static site on Amazon now via S3, but it's pretty bare bone in terms of what you can do outside of basic file serving. I've also not been impressed with the offering from Azure. That isn't to say it's bad, just that smaller players like Netlify and Zeit are much better in comparison. I think that will change and also help bring JAMStack to more developers.

Once suspended, stackbit will not be able to comment or publish posts until their suspension is removed.

Once unsuspended, stackbit will be able to comment and publish posts again.

Once unpublished, all posts by stackbit will become hidden and only accessible to themselves.

If stackbit is not suspended, they can still re-publish their posts from their dashboard.