Businesses use data analytics to extract meaningful, decision-making information for their day-to-day operations. Analytics can discover hidden relations, find unexpected patterns, learn about customer behavior, understand the past and predict the future.

In this tutorial, we’ll learn about Clickhouse, a column-oriented database for real-time reports. We will explore how it works and take it out for a test drive using StackPath Containers.

Before diving into the tutorial, first we’ll provide an overview of column-based databases, ClickHouse, and the benefits of running ClickHouse on StackPath.

Compared with traditional row-based databases, column databases have a subtle yet profound difference in how data is stored on disk.

A column-based database DBs serialize them by columns:

Now, imagine we ask the server to calculate how many years each of the persons on the tables above were CEOs of their respective companies. A row database has to retrieve each row, then get to the columns with the relevant years and discard the rest. A column database only needs two I/O operations (regardless of the size of the table): one for each date column. No data is discarded. A column system will perform much better in this case and scales much better with large tables.

As a result of their design, column databases have unique properties:

Clickhouse is a database management system (DBMS) created by Yandex, the second-largest web analytics platform in the world, and released as open-source software under the Apache 2.0 License.

Beyond Yandex, many other big companies have adopted Clickhouse for their analytics, including Cisco, Cloudflare, CERN, Bloomberg, and Spotify.

Is Clickhouse right for your project?

Clickhouse is good for:

Clickhouse is not good for:

Databases have some unique requirements that can clash with public cloud
common offerings:

Edge Computing solves these issues by moving servers as close as possible to customers and sources of data. As for StackPath, it offers the best of both worlds: the convenience and flexibility of the cloud with on premise-like performance.

In this section, we’ll deploy a single ClickHouse edge computing node in order to get familiar with the system. Then, we’ll learn how to implement a cluster.

First, we need to create a custom Docker image with our private config. Before continuing, ensure you have the following things:

To download the images to your machine, use the following commands:

By default, the Clickhouse server includes a single user called default with a blank password. For testing purposes, having a blank password is not a problem, but since we’re going to deploy the node in production, we need to secure it.

To customize the user settings, we need to change a file called users.xml, which is inside the clickhouse-server image.

To do this, create a directory to store our files.

Start an instance of the container so we can copy out the file.

Copy the file from the container to your machine.

Open users.xml with a text editor and locate the following lines:

To generate a SHA256 password in Linux or Mac, execute the following command in a new terminal:

The first line printed is the password, the second is the encoded SHA256 string. Alternatively, you can use an online SHA256 generator to obtain the string. In either case, keep both the password and the SHA string at hand as we’ll need them both soon.

Remove the <password></password> line to get rid of the blank password. Then add the following line with your SHA256 string.

Create a file called Dockerfile with the following content:

Then, build the image.

Test if it starts correctly with this command:

Finally, from a different terminal, try connecting using your password:

Push the Image to the Registry

Before we can use the image in StackPath, we have to put it in a Docker registry. To do this, log in to Docker Hub with your account.

Build the image using your Docker Hub username as a prefix.

Push the image to Docker Hub.

Once we have pushed the image to the Docker Registry, we can deploy it in StackPath. 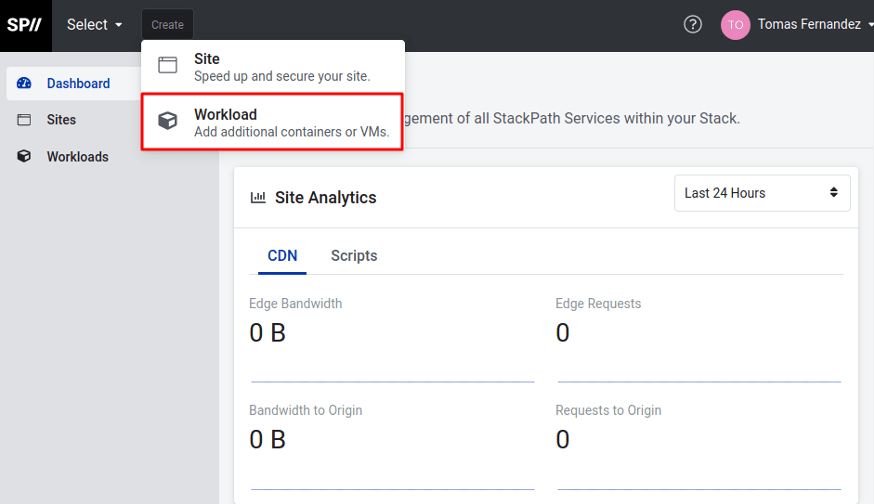 We’ll name the workload “clickhouse-servers” and set the type to Container. For Image, type the address to your Docker image: YOUR_DOCKERHUB_USERNAME/clickhouse-server:latest

If you are using a private repository or a different registry, check the Add Image Pull Credentials box and type in the pull details. 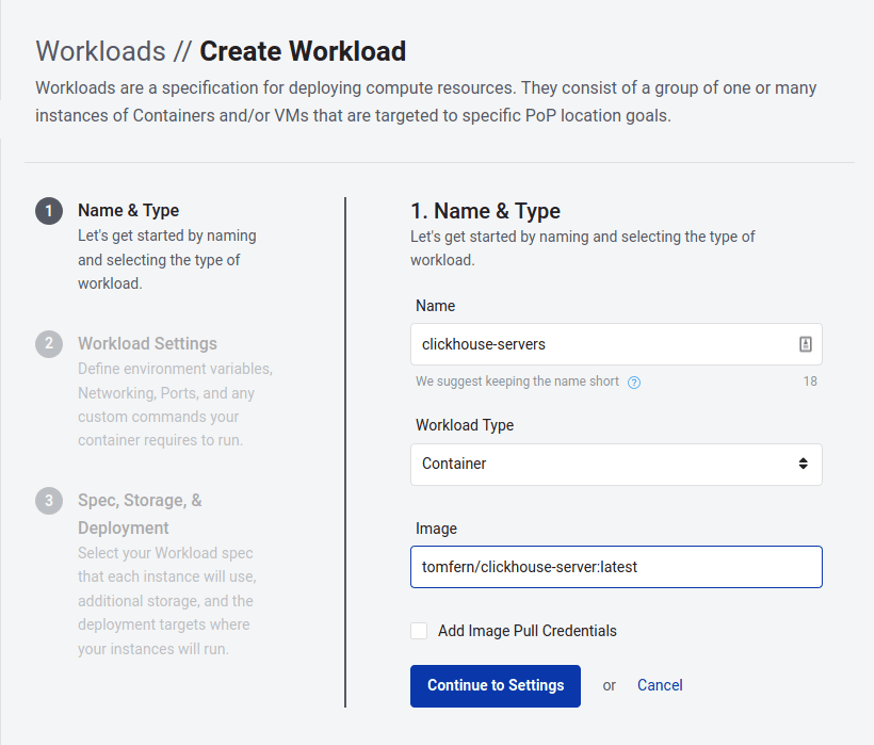 If you want the servers to be accessible to everyone, add the following ports under Public ports. This will assign Public IPs and open the ports to the Internet.

All containers get a Private IP assigned automatically: 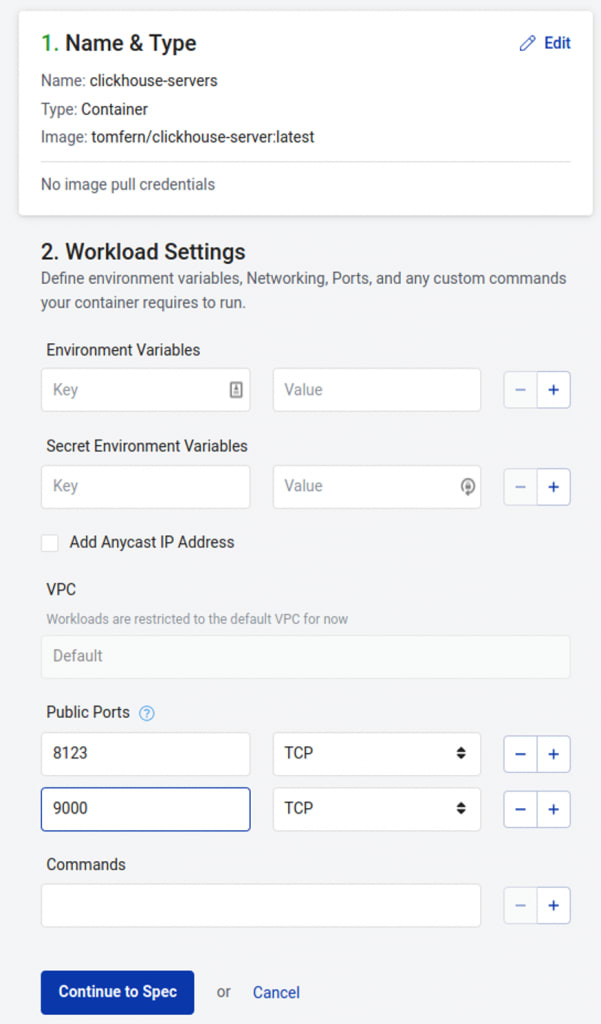 In Spec, choose the machine size. Clickhouse developers recommend a minimum of 4GB of RAM to allow for complex queries. If in doubt, choose the smallest machine, you can always scale the machine up with a few clicks later on.

Next, we’ll need a volume to persist our data, under Additional volume type /var/lib/clickhouse and set its size on GBs.

Under Deployment Target, we will group servers with similar scaling needs. Type a descriptive name like “clickhouse-servers”. Then select the PoP, which is nearest to you or to your customers. Set the number of instances to 1. 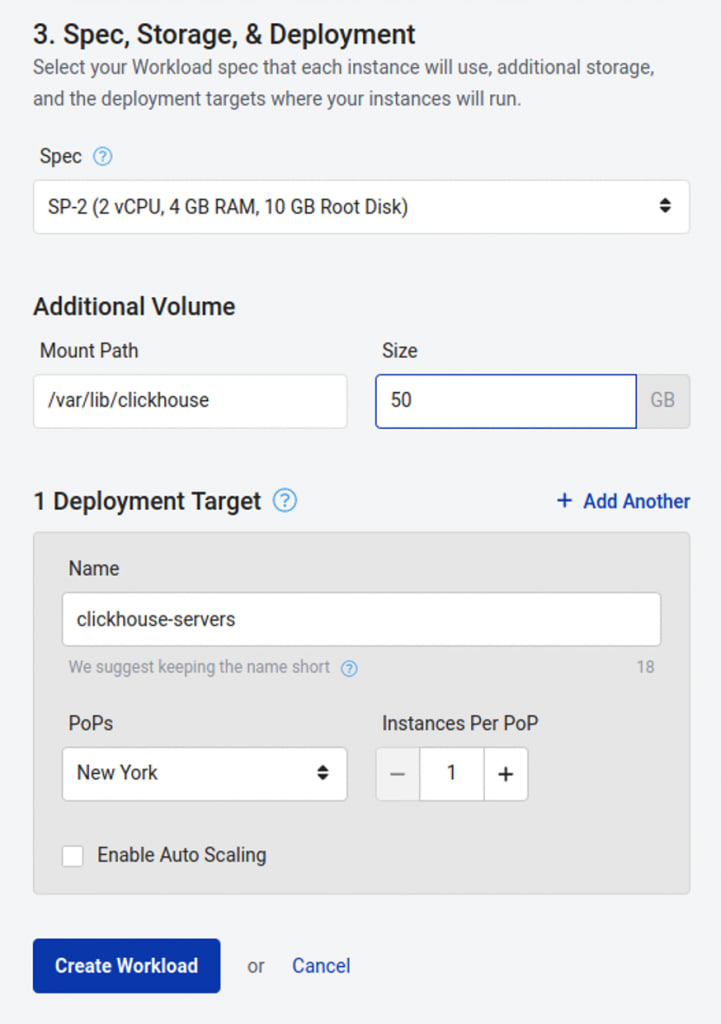 Wait a few seconds until the instance is on the Running state.

Click on the running instance to get its details.
Then, scroll down to the Instance details section and copy the Public IP address.

Next, open a terminal and try the /ping endpoint with Curl or a browser. If the server is running it should respond with "Ok".

We can also connect with Clickhouse Native Client.

Now you can execute Clickhouse SQL commands on your new server:

First, we’ll create the remaining instances so that we can get their
Private IPs.

On the left navigation menu, click on Workloads and select your container workload. Then, click on the Gear icon to edit the workload configuration.

Click on the Edit icon next to Spec, Storage & Deployment and Increase the number of Instances per PoP to 3. Click on Save Changes.

StackPath will create the remaining instances in a few seconds.

When the instances are ready, copy the Private IP address of each one:

Open a terminal and type the following command to copy the file out of the container:

Then, open the file and locate the remote_servers line:

Remove all the lines inside the <remote_servers> </remote_servers> elements and type the following config. Replace the IP Addresses with your servers Private IPs:

Edit your Dockerfile to add the modified config:

Push the new image to the Docker Registry, same as before.

The final step is to tell StackPath to use our new configuration. To do this, go to your StackPath Workload and click the Gear button again to change its configuration. Edit the Image name with the new tag: YOUR_DOCKERHUB_USERNAME/clickhouse-server:sharded. 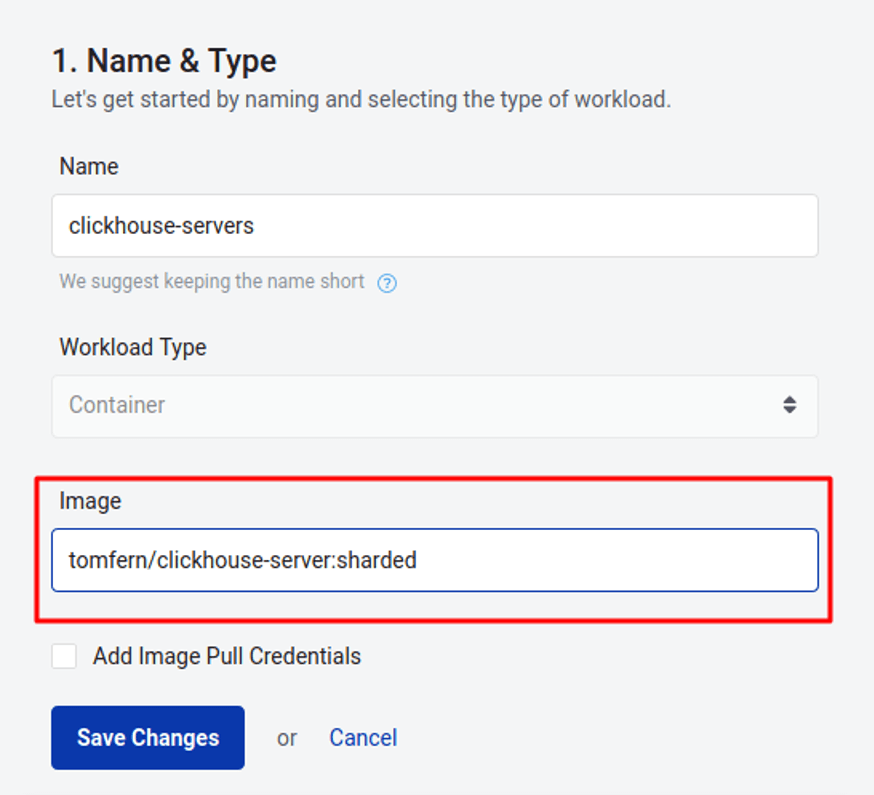 Again, we can use Curl or any browser to check each of the ClickHouse nodes. Just replace the IP addresses with your Private IPs.

We also can connect to any of the instances to check the cluster health.
Run the following query to see the cluster status.

And that's it! If you made it this far, you have successfully deployed a 3-node cluster on StackPath.

For the next step in your road to mastering ClickHouse, try setting up a second cluster on a different PoP and establishing table replication between the two data centers.

If you want to learn more, check out these related docs and projects:

How to use Redis Cluster for caching