After reading more about the subject I realized that section “Scanners and parsers” from my previous post needs a correction.

From Chomsky grammar’s point of view, there is no distinction between lexical and syntax grammar. For example, let’s examine simple pseudo-english language (Chomsky’s form):

It’s kind of hard to read and work with. Let’s rewrite it as EBNF:

It’s so much easier to see structure in the later notation. But if we will build a parse tree according to those rules letters will be in the leaves of the tree. Which is good enough for a recognition task, but not useful to see a “big picture”.

What if instead of letters in leaves we would have the smallest meaningful items in our language? If we talk about programming language this would be a token (or lexeme), for example, number literal, keyword, identifier.

Lexeme is a meaningful linguistic unit that is an item in the vocabulary of a language. Etymology: Greek lexis word

The interesting part is to see the subtle difference between the recognition task and parsing. Virtually this is the same process, but to make parsing useful we need some extra efforts.

To achieve this we can separate our grammar into two parts:

As far as I can tell this separation is not specified formally. Chomsky’s grammar, PEG, BNF, EBNF don’t have it. SDF3 has this separation - the most prominent difference (from my PoV) is that when syntax rules normalized layout symbol inserted between each symbol in syntax rule, but not for lexical rules. The syntax is responsible for overall structure - it doesn’t care about layout symbols (space, newline, comment, etc.) or how much of them.

from syntax, PoV is the same as:

Non-terminals from lexical grammar are used as terminals in syntax grammar. This way we can have lexical units (words) in the leaves of the parse tree.

There can be different approaches for what we allow as terminals in syntax rules. Do we allow only symbols defined in lexical grammar or other symbols as well?

If we require all symbols to be defined in lexical grammar before they can be used in syntax grammar:

This approach brings keywords (or reserved words). Or we can allow defining those words inline (like in SDF3):

Firs approach is less flexible - as soon as we define if as a keyword, it can’t be used as variable, for example, in JS there are reserved words that you can’t use as variables (identifiers):

But for example, in Lisp this is not a problem:

In practice it doesn’t seem to be a good idea to use if as a variable, so why bother? I tried to show that lexical grammar may be limited in power. Depending on the implementation of the algorithm it may or may not have access to information of syntax grammar. If it has access it can identify that if in this context used as a variable (identifier), not as a keyword.

This example shows ambiguity in lexical grammar. It is easier to understand it with an example from natural language: the word “attack”. Is this a noun or a verb? You can’t tell unless you see it in the sentence.

How to resolve lexical ambiguity? Depends on how your algorithm is implemented. If you have two-step parsing:

Not much you can do except rely on some ad-hock solutions:

On the other side, if your parser doesn’t have a scanner as a separate step ( scannerless parser), there is a chance you can resolve disambiguation based on syntax grammar.

About clarity of the structure

Let’s take a look at the following piece of code:

It can be represented (depending on algorithm and grammar) as:

But there are algorithm and grammars which can produce denser tree, for example, SDF3: 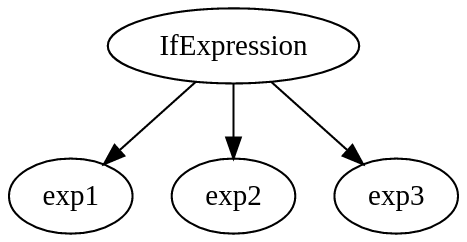 In this case, based on position it is possible to tell that the first item is a condition, the second is the “then” branch, third is the “else” branch.

This can be written as an S-expression:

At the lexical level, the meaning is assigned to each “word”, but sometimes it is not possible to assign meaning unambiguously without “context”.

At the syntax level, the meaning is in the structure.

Scanner (tokenizer) can return tokens as:

Converting AND to OR in JavaScript