All material I have read on the subject use slightly different notation. Apparently, there is some history behind it.

Matthew Might (in Parsing with derivatives) uses a variation of Copi, Elgot, and Wright notation:

Almost everybody uses * the same way - postfix unary operator. The difference is that some notations use superscript and some use plain variation. To add more confusion: ϵ, ε are both the same Greek letter - epsilon - in different styles.

Here supposed to be table, but dev.to can't handle tables correctly, so screenshot instead: 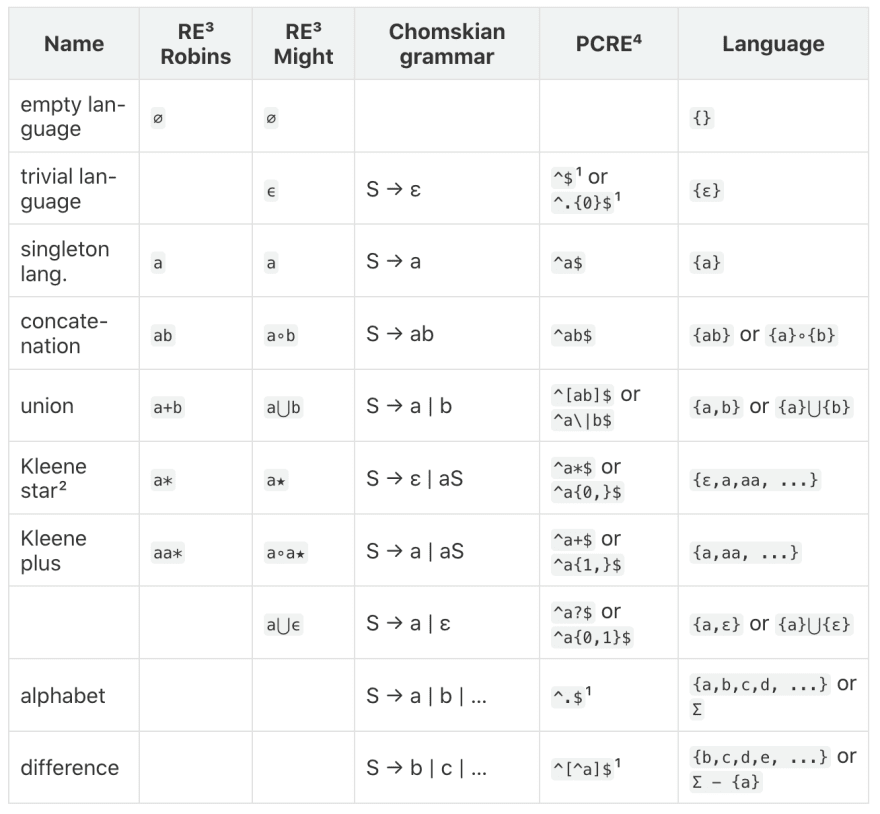 In the context of programming, it is an optimization technique developed by Richard Bellman in the 1950s. It can be applied to a specific class of recursive problems. For example, calculation of Fibonacci numbers or finding the shortest path in a graph.

In general, it allows to turn algorithms with exponential complexity to polynomial complexity (but may require more space). I won’t go into more details - but very primitively it boils down to memoization and cycle detection.

You can watch this MIT course where it’s explained better.

In 1964 Brzozowki proposed idea of derivatives for regular expressions. Note: he uses λ for ϵ and φ for ∅.

Formally derivative defined as Dₐ(R) = { t | at ϵ R }. Basically, it is the opposite of concatenation.

In 1985 Wadler proposed to represent parsers as functions and to construct bigger parsers by composing functions. The key idea is to start from parsers for atomic languages:

Then atomic parsers can be composed with union (alt), concatenation (seq), and Kleene star (rep) to create parsers for “bigger” languages.

It is a bit harder to see correspondence of derivatives to those parsers:

The problem here is that the derivative corresponds to the recognizer. Parsers are a bit trickier, than recognizers.

Ruzzo in 1979 showed that any recognizer can be transformed to parser with the overhead of O(log n) at most.

Wadler shows the importance of lazy evaluation in this approach. He reminds that this approach corresponds to recursive descent (with backtracking ?) e.g. it can’t handle left recursive grammars.

The idea was proposed by Matthew Might et al in 2010.

They extend the idea of Brzozowki derivative from regular to context-free languages. Then they create a set of functions that can be composed to represent grammars - the same way as in parser combinators. They rely on laziness and fixed point (essentially cycle detection) to make sure that the algorithm won’t do infinite recursion. Then they transform the recognizer into a parser and introduce the idea of derivative for the parser. And the last step is performance optimization - memoization is supposed to improve performance, but the problem is that on every parse it produces new grammar which grows exponentially (I guess exponentially). To solve the problem with growing grammar they added a compaction step after each parse cycle (Brzozowki had the same idea).

The initial intention was to “kill yacc” e.g. provide a simpler parsing algorithm (at least for learning purposes). It is indeed simple, but without fixing the problems listed above I don’t think it will “take over the world”.

What else I would expect from parser - yacc is not that high bar IMO, it is based on LR algorithm from the ’60s, people since then invented a lot:

Canonical implementation provided in Racket (Scheme). To make sure I understand how it works I decided to reimplement it in JavaScript.

Laziness is essential for this algorithm. Not a lot of languages provide it out of the box (in Scheme and Lisp it is trivial to emulate it with macros). In JS I decide to use Proxy and anonymous functions (lambdas).

To implement memoization we need to use a “hash map” (aka dictionary, aka associative array). Not all languages allow to use objects (aka structs) as keys, for example, I use WeakMap instead of Map in JS. Also, not all languages provide “weak” hash maps, which means that memory won’t be cleaned up by garbage collectors.

JS doesn’t provide ordered sets. I decided to avoid npm packages, so I use an array and remove duplicates upon insertion.

JS doesn’t provide functional pattern matching - I use switch/case and if/else instead 🤷‍♀️.

It takes some time to understand how to implement a feature that is not built in the language. It is hard to debug - I wasn’t sure if there was an error in the algorithm or my reimplementation of laziness, memoization.

One way or another it was a good learning exercise. More thoughts after:

I don’t understand yet is why Wadler says that parsing combinators are decent recursive with backtracking - it produces all parse trees. Backtracking corresponds to depth-first search, lookahead corresponds to breadth-first search, right? Does it make sense to differentiate backtracking for all branches and lookahead of infinite depth? They both will walk through all nodes in the graph eventually, but in a different order 🤔.

Language can be defined in 3 ways:

The first definition is unique but impractical. The other two are not unique e.g. two different grammars can describe the same language, for example: S → ε | aS, S → ε | Sa, a*.

I wonder if this algorithm can be trivially implemented only in functional languages or not? If the answer is yes, does it mean that JS is not so “functional” as people tend to think 🤔?

How To: Explain Coding Projects To A Team Of Non-Coders

Shortest Javascript Program , window and this