A JWT Is an open standard that defines a compact and self-contained way for performing Authentication in REST APIs where information is securely transmitted between both parties as a JSON object.

This information can be verified and trusted because it is digitally signed. JWTs can be signed using a secret (with HMAC algorithm) or a public/private key pair using RSA.

NOTE 1: We consider it compact because of its size, it is possible to send it through an URL, POST parameter, or inside an HTTP header. Also due to its size its transmission is fast.
NOTE 2: We consider it self-contained because we do not need to query the database more than once, the payload contains all the necessary information about the user.

When to use JWT?

Authentication: After the user is signed in, each subsequent request includes the JWT. This allows the user to access routes, services, and resources that require that token.

Information Exchange: JWTs are a secure way of transmitting information between parties, because you can be sure that the sender is who they say they are, since they can be signed (possibly by using a public/private key pair). You can also verify that the content has not changed, since the signature is created using the header and the payload.

A JWT is formed by three parts separated by dots (.): a Header, a Payload, and a Signature. These parts follow this structure: xxxxx.yyyyy.zzzzz.

Contains some information that usually include the token type (which is JWT) and the hashing algorithm (such as HMAC, SHA256 or RSA).

Afterwards the JSON containing that Header is Base64Url encoded to form the first part of the JWT.

Contains the claims that are statements about an entity (usually the user) and additional metadata.

NOTE: Can not contain sensible information about a user like password, but it is ok to include user id, name or email.

Example of claims: iss (issuer), exp (expiration time), sub (subject), aud (audience), among others.
Afterwards the JSON containing the payload is then Base64Url encoded to form the second part of the JWT.

Is used to verify that the sender of the JWT is who they claim to be and to ensure that the message was not changed while it was being transmitted.

To create the signature take the encoded header, the encoded payload, a secret, the algorithm specified in the header, and sign it.

The output is three Base64 strings separated by dots: an encoded header, an encoded payload and it is signed with a secret. They can be passed in HTML and HTTP environments. 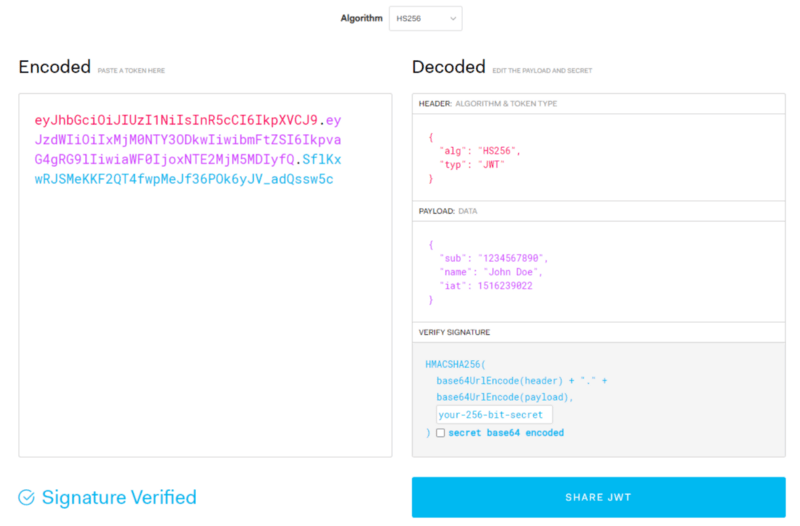 NOTE: Go to jwt.io, a website that allows you to decode, verify and generate JWT.

How does a JWT work?

1 - When the user is authenticated by successfully signing in using their credentials, a JWT will be returned.

NOTE: Keep in mind that tokens are credentials, so you must prevent security issues: do not keep tokens longer than required.

2 - Whenever the user wants to access a protected route, its request should send the JWT, usually in the Authorization header using the Bearer schema: Authorization: Bearer .

NOTE: This authentication mechanism is stateless, because the user state is not saved in the server memory. Instead, the server's protected routes check for a valid JWT in the Authorization header, and only allows the user if this condition is fulfilled. As a result it is not necessary to query the database multiple times as JWTs are self-contained, so it already has all the necessary information.

Why Should You Use JWT?

Contact me through my social media. Let's talk about security, authentication and programming in general, be it on LinkedIn or GitHub.

Share with us what JWT good practices you advocate for.

How to build a multi-step form using React.js + Material UI

Once suspended, stevescruz will not be able to comment or publish posts until their suspension is removed.

Once unsuspended, stevescruz will be able to comment and publish posts again.

Once unpublished, all posts by stevescruz will become hidden and only accessible to themselves.

If stevescruz is not suspended, they can still re-publish their posts from their dashboard.

Once unpublished, this post will become invisible to the public and only accessible to Steve Cruz.

Thanks for keeping DEV Community 👩‍💻👨‍💻 safe. Here is what you can do to flag stevescruz:

Unflagging stevescruz will restore default visibility to their posts.