The Meteor Community Survey has been closed last week. First of all there were 207 responses, up from 57 last year. I believe this shows that the communication in community has improved and is is easier to spread messages.

Now this article is just a quick look at the easy to aggregate results (ie. can be put into graphs). Written responses are going to take a bit longer to analyze so article about that is going to come at a later date with a complete analysis.

First is was the question of what front-end is used with Meteor. 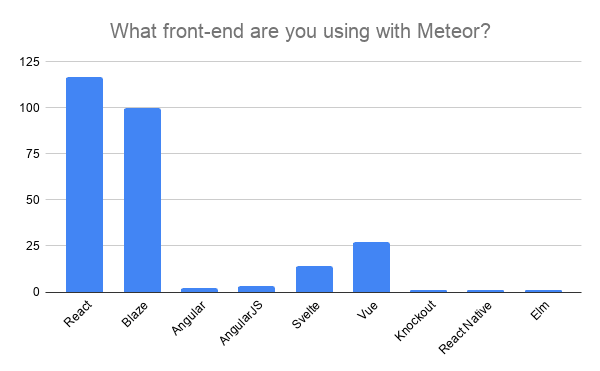 Most obviously there is still a significant use of Blaze, be it for legacy project or small projects it shows that there is still interest in maintaining this library.

Despite popular sentiments, the most used front-end is React with Vue and Svelte trailing far behind. 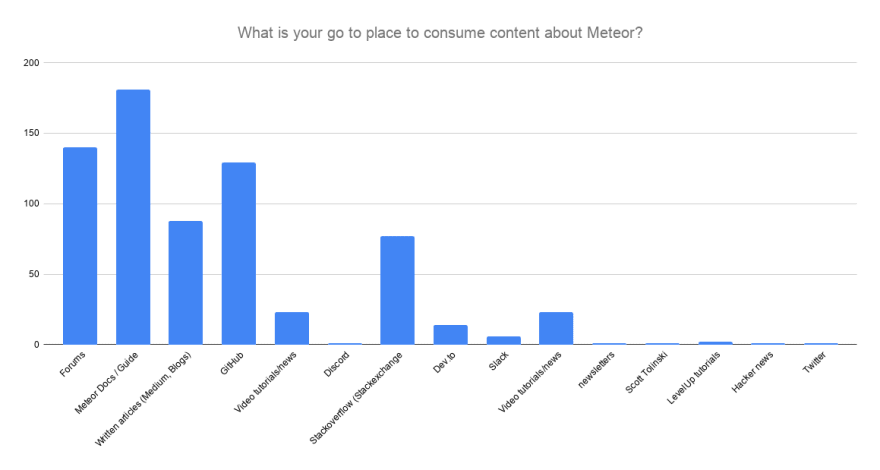 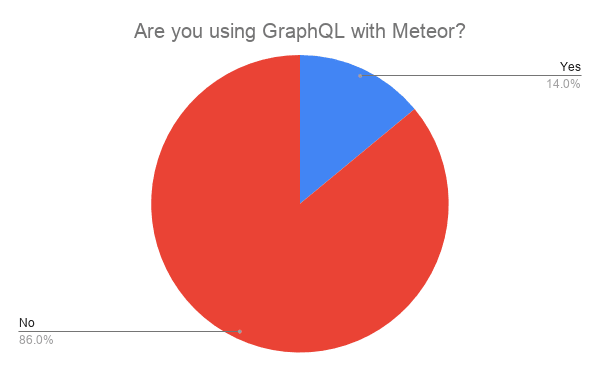 GraphQL is the new hot things when it comes to communicating data to the client, but it looks that it still has to take on in the general Meteor community. 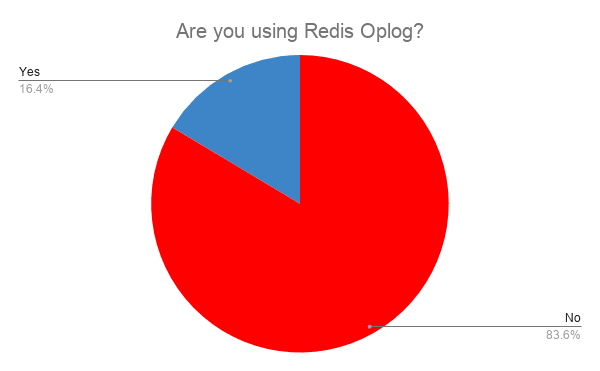 Redis Oplog is in a similar place, but in this case it is obvious that Redis Oplog will be used by people whose applications are getting traction and scaling and performance starts to become concern. 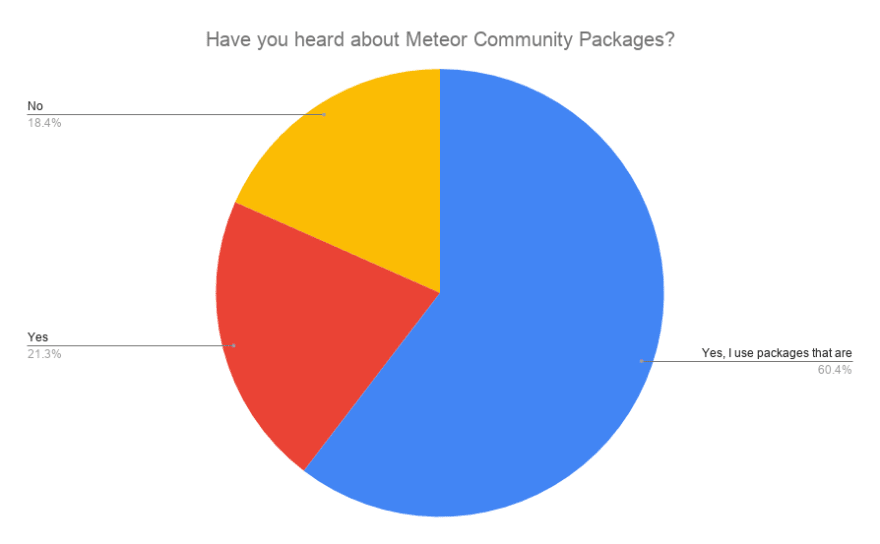 Now, most people who have answered the survey have heard about Meteor Community Packages as they most likely heard about it from those communication channels. Still it is nice to see that we were able to reach people outside of the community. 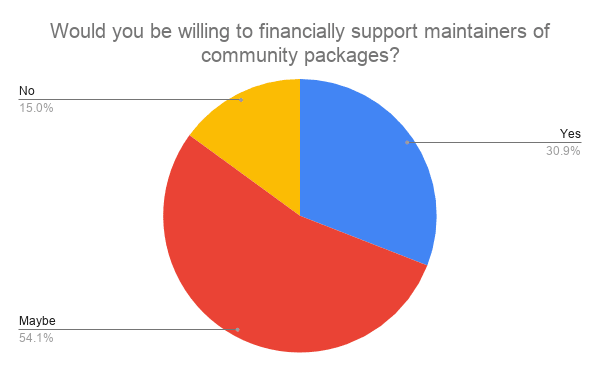 The discussion about financially supporting open source rages on. It is still heartwarming to see that there is a sizable section of people who are willing to support FOSS developers.

If you are one of them you can sponsor yours truly on GitHub sponsors and there is an ongoing thread on the Meteor forums listing Meteor developers with GitHub sponsor and there is also a repository with additional sponsorship options maintained by Harry Adel. 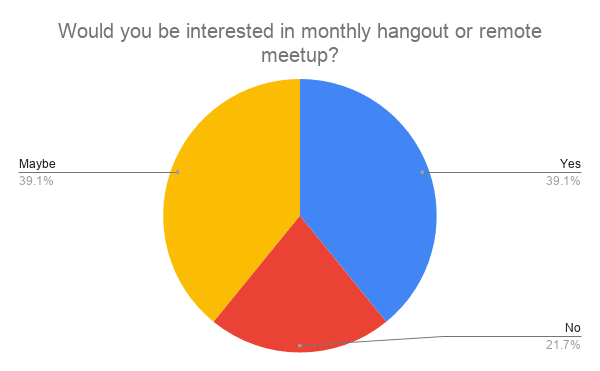 Interest in monthly hangouts is split pretty evenly. This question was established to gauge general interest in this option. Right now there are plans in the community to establish such a thing and given the size and spread (more on that later on) it would be difficult to organize for the whole community.

Personally I have established it for my sponsors and I believe that will be more successful model as it will be tailored closer to people's interests. 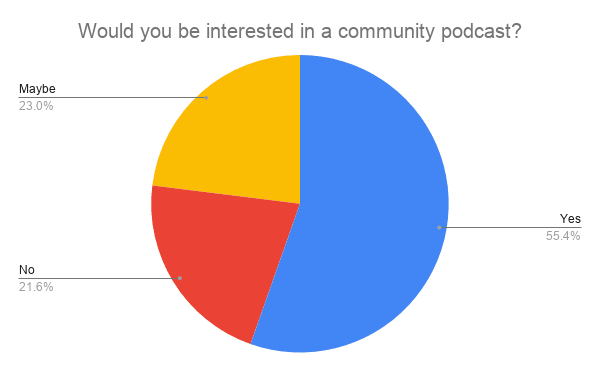 The question of creating a podcast has been of general interest since last year, but so far there it failed to take hold. Let's be honest, podcast of adequate quality is not an easy thing to do. 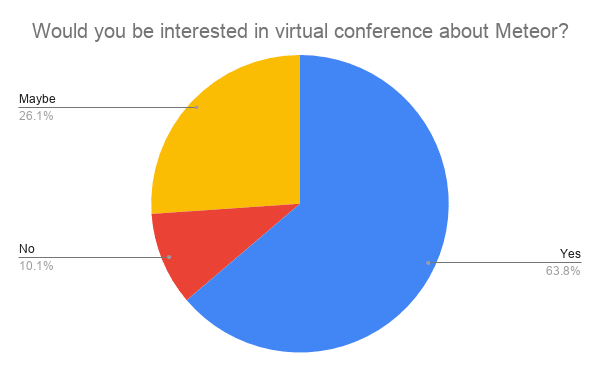 With lock down all over the world virtual conferences have exploded in popularity. Now as you will see soon, this is pretty difficult to manage due to the distribution of developers around the world, but we have a Meteor based company Pathable which specializes in virtual conferences, so it is something we will be exploring to do. 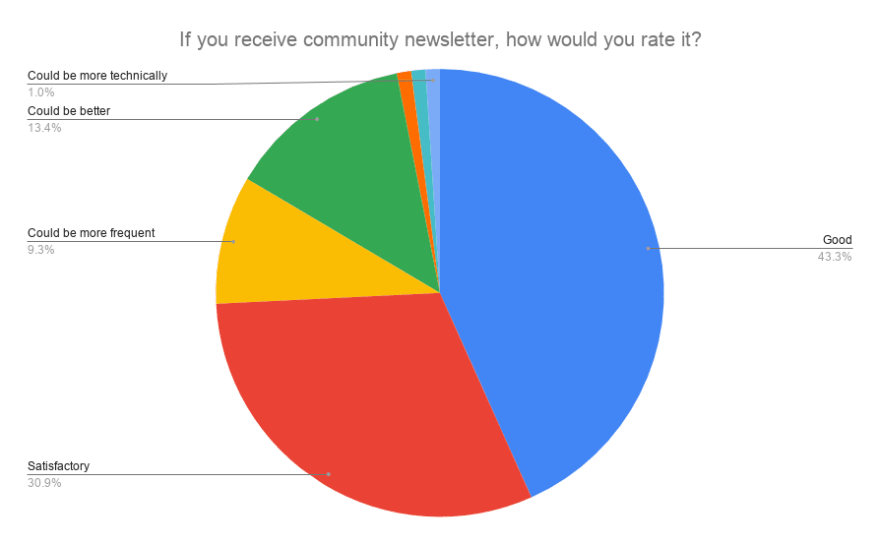 Meteor Community Newsletter is an irregular newsletter that goes out when a new version of Meteor is released compiled by yours truly with the help from the Meteor Community Slack members. It seems that most recipients are satisfied with it which humbles me. There are currently no plans to increase the volume (which I know can be frustrating when there is a long delay between releases). I will see what I can do to extend the content covered in the newsletter, but you can also help by voicing your opinion on Meteor Community Slack or by replying to the newsletter which will go straight to me.

If you want to receive the newsletter you can sign-up.

Meteor devs around the world

Finally the already mentioned distribution of Meteor developers around the globe. First of all a big disclaimer. The question was asking about timezone in order to determine what should be the optimal time for virtual conference so that most people can attend. In the end most people wrote down their countries instead of timezone. This allowed me to create this nice looking map, but I had to also take some liberties when assigning time zones to countries. Second I know for a fact that many of the listed countries have more Meteor developers than answered the survey so take this as a general sample and not a definitive map. 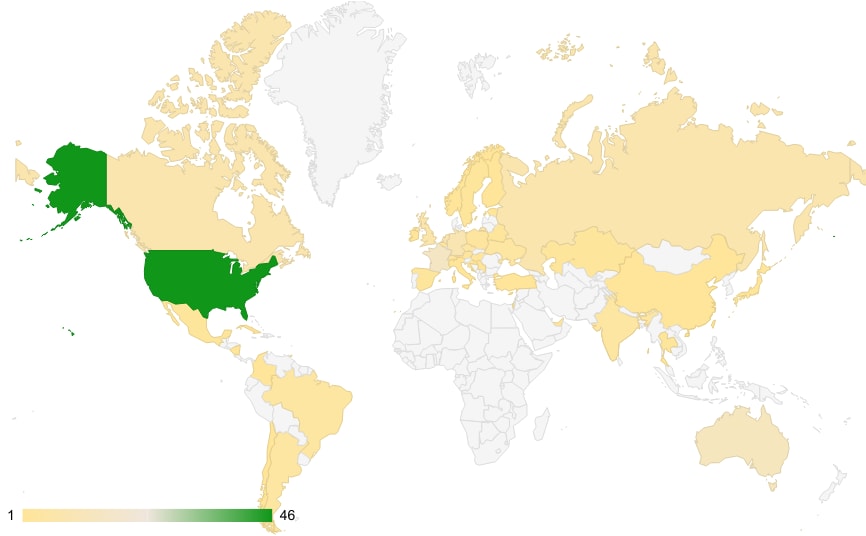 What to expect in the final report

Now this was just a quick look on the results after some initial data clean-up. Analyzing the full survey is going to take a bit more time. The full analysis will include a more in-depth analysis of the answers in reference to other questions and will provide some opinions on why certain results are as they are (ie. use of Redis Oplog, Apollo, etc.) and there will be more graphs from analysis of textual answers. Finally there will be a version of the article that will have interactive charts.

When will be this analysis out? I estimate in a week or two.
Will the full data be available? Yes, sometime after the final analysis after I anonymize the data.

If you like my work, please consider supporting me on GitHub Sponsors ❤️.

Once suspended, storytellercz will not be able to comment or publish posts until their suspension is removed.

Once unsuspended, storytellercz will be able to comment and publish posts again.

Once unpublished, all posts by storytellercz will become hidden and only accessible to themselves.

If storytellercz is not suspended, they can still re-publish their posts from their dashboard.

Once unpublished, this post will become invisible to the public and only accessible to Jan Dvorak.

Thanks for keeping DEV Community 👩‍💻👨‍💻 safe. Here is what you can do to flag storytellercz:

Unflagging storytellercz will restore default visibility to their posts.