Back in my mind, I had always thought that Perl is slow, comparing to compiled languages, like C/C++. So it is always in my mind that I should rewrite my simple web server from Perl to a compiled language. Finally I did, and the result is astonishing to me.

Both are pretty simple.

How they stack up against each other?

I had believed that the Go implementation should be much faster than the Perl code, since it is a compiled language, and also that the Go http server is said to be a production grade software that lays a solid foundation for Go web applications. However I'm astonished to find out that the result is just the opposite.

Here is a light load situation, of 100 concurrency requests (the number of multiple requests to perform at a time): 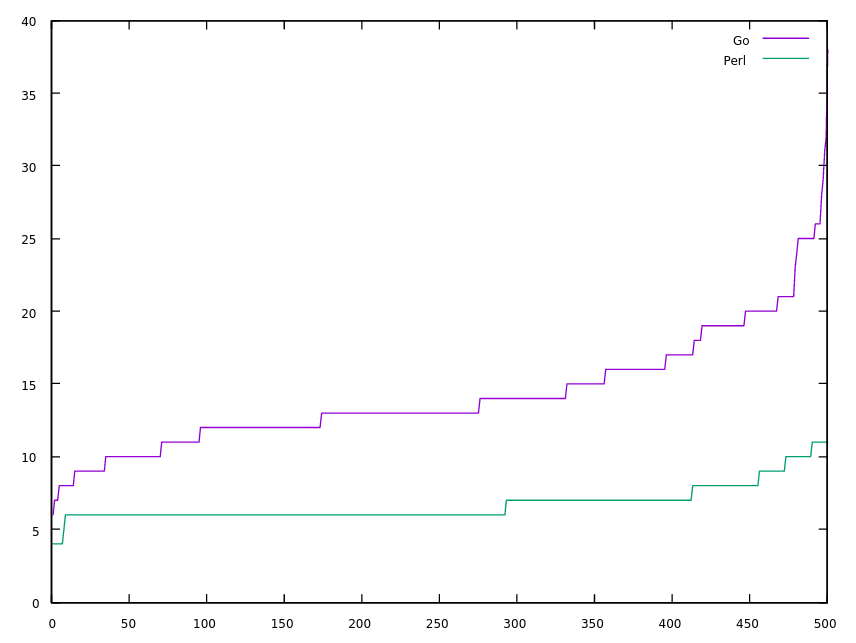 We can see that it is no-sweat for Perl, however for Go, the response time has jumped to about 5 times than the initial value (when there was almost zero load) in the end.

Here is a load situation that finally pushed the response time up for Perl: 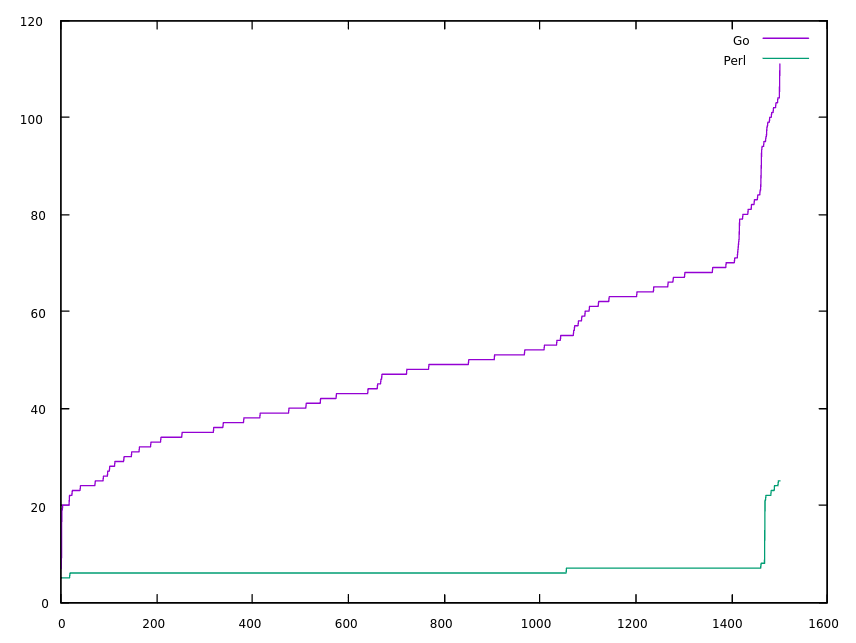 This time, the concurrency requests is 500. We can see that for Perl, the situation get deteriorated at the very end. However for Go, it starts twice or four times as slow as the previous case when there was almost zero load (from 5ms to 20ms), and it keeps deteriorating, until it is close to 70ms, then jumped rapidly upwards.

So the lesson I learned today is, Perl is not only a fast prototyping language, when it comes to simple web servers like this, Perl performs much better than Go too.

The two load situations are generated by Apache Bench,
using ab -n 500 -c 100 and ab -n 1500 -c 500 respectively. I've published the raw test results here, and there statistic summaries are included at the end of the article.

Shameless plugin - my simple web server in Perl is the core of my dbab package, the dnsmasq based ad blocking, which is ad-blocking done at the DNS level -- all requests to ad-sites are blocked right there at DNS. No more user space extensive pattern matching & replacing necessary any more. It is feather weight, both in terms of package size and CPU usage. It can speed up mobile device browsing without installing any apps to them. I'm working to release a new version soon...

Once suspended, suntong will not be able to comment or publish posts until their suspension is removed.

Once unsuspended, suntong will be able to comment and publish posts again.

Once unpublished, all posts by suntong will become hidden and only accessible to themselves.

If suntong is not suspended, they can still re-publish their posts from their dashboard.