Javascript is a single threaded language, at least the majority of it. Things are executed in a certain order. But at times it does work in a non-blocking manner which sort of gives it an asynchronous appearance. But how does the Javascript engine handle all of the script, Browser APIs everything at once ? I can't do all of it at once, even I got like 10 hands.

Before explaining how things work I'll give a briefing of different parts involved in running Javascript. 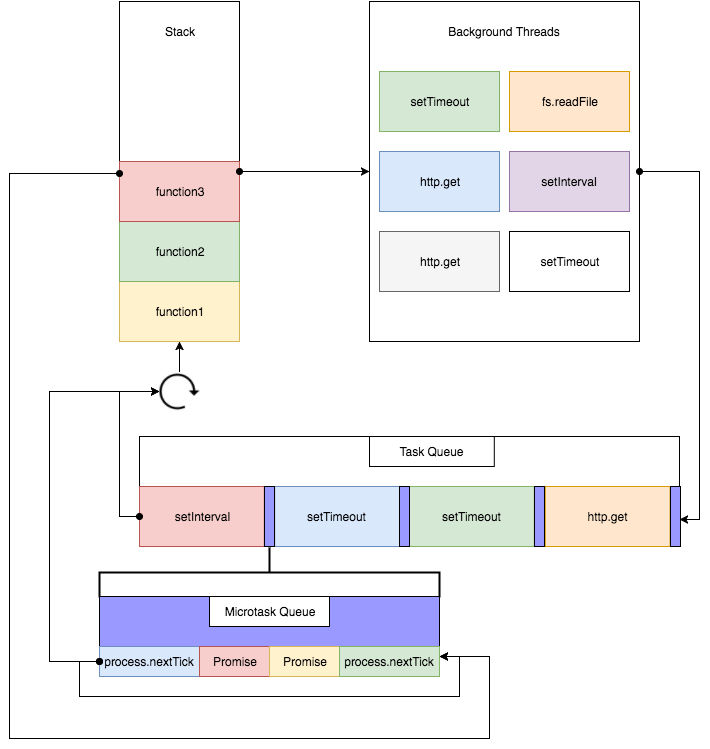 Javascript is single threaded, it means it has one call stack. Call Stack is a data structure which keeps track of function calls in our program. When ever we call a function for its execution, we are pushing it to the stack. It is popped out of the stack when the execution is completed.

This is where all the memory allocation happens for your variables, that you have defined in your program.

Tasks ensure that actions are happening sequentially. A task can be as simple as any function scheduled in the Javascript. Between the tasks, the browser may render updates. All the things mentioned here are generally Macro Tasks. Callbacks of such tasks are usually dealt by a data structure called Task Queue.

There is also something called Micro Task. Micro Tasks are useful to make something async without taking the penalty of a whole new task.
As per MDN:

A microtask is a short function which is executed after the function or program which created it exits and only if the JavaScript execution stack is empty, but before returning control to the event loop being used by the user agent to drive the script's execution environment.

With ES6, Promises have been introduced into Javascript, which along with Mutation Observer, use the microtask queue to run their callbacks.

Task Queue is a JavaScript run-time messaging queue which handles task that is allocated by different Web APIs. This queue is dedicated to handle the Web API callbacks. The messages are processed once the call stack is clear.

As mentioned above, Microtask queue handles callbacks with respect to Promises and Mutation Observer.

Here is how the Event Loop handles different tasks:

All of it can be better illustrated by the code below:

The output on Chrome would be:

Now why is that so?

I Hope the above process was clear.

However the output will vary from Browser to Browser. This is sort-of excusable, as promises come from ECMAScript rather than HTML. ECMAScript has the concept of "jobs" which are similar to microtasks, but the relationship isn't explicit aside from vague mailing list discussions. However, the general consensus is that promises should be part of the microtask queue, and for good reason.

Before concluding this write-up, a brief intro on Web-Workers.
Web-workers help to handle the intensive tasks, which would have blocked the UI. Web-workers help in making the best use of multi-threading.

But wait, Wasn’t Javascript a single-threaded language? The very first sentence of this writeup says so?

Well, I stand true to my words. This is because, the Web workers aren’t part of the Javascript, rather they’re a built in features of the browsers which are being accessed through Javascript. Web Workers are in-browser threads that can be used to execute JavaScript code without blocking the event loop.

Will be covering them in a separate article shortly.

Till then Happy Quarantine, Stay Safe and Keep Learning!

Do CSS framework users actually know CSS? We might have some data

Once suspended, suvhotta will not be able to comment or publish posts until their suspension is removed.

Once unsuspended, suvhotta will be able to comment and publish posts again.

Once unpublished, all posts by suvhotta will become hidden and only accessible to themselves.

If suvhotta is not suspended, they can still re-publish their posts from their dashboard.

Once unpublished, this post will become invisible to the public and only accessible to suvhotta.

Thanks for keeping DEV Community 👩‍💻👨‍💻 safe. Here is what you can do to flag suvhotta:

Unflagging suvhotta will restore default visibility to their posts.