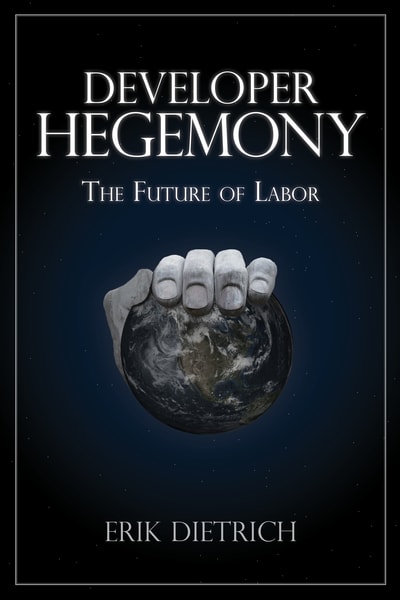 I'm favoring speed over form with this new series, as I've read a lot of software books over the years and mostly want to give people the impetus (or not) to read a book from the perspective of someone who's been in the industry a while and had many ups and downs. I've wanted to do something like this for a while, but hadn't had that quake book-like effect that's knocked me out of my doldrums to actually start the reviewing process until Developer Hegemony: The Future of Labor by Erik Dietrich. It is such a thought-provoking, insightful, and I think inspirational book that I want to give it a bump on this forum and thank Erik implicitly by writing this positive review :)

It's rare that I get a software-related book that I not only love, but want to read as fast as possible and not skim at all. This book was literally a page-turner for me, and I read it over a three-day weekend recently.

If you've ever worked in a corporate programming setting, especially for one of the larger software companies, and had certain aspects of that feel unsavory to you, then much of this book will resonate strongly with you.

Additionally, if you've ever felt like your personality is just a bit askew of the "classic" software engineer stereotype (only loves code, meritocracy, high social anxiety, wants the world to boil down to binary), this book will resonate as the liberated "efficiencer" archetype will synthesize what you may have been hoping for in a "dream job/fit" situation for your personality...the catch being you have to make that job for yourself.

Along the way, Dietrich describes how the corporate pyramid functions, its roots in the Industrial Revolution, the archetypes of people who work in this pyramid, and why he believes it's a failure and how you can succeed within that structure - if you so choose. All very cogent points and, though arguably cynical, very true to life. People who strongly identify with their perceived elevated status as software engineers, who may (knowingly or not) look down upon other forms of corporate "line-level" work, may be in for a rude awakening as he rips the veil off just how pedestrian software engineers really are relative to other vocations also judged by their output alone. Corporations may know to do some ego stroking along the way, but in the end you are what you output and you are a means to an end. A translation unit of business logic to code resulting in money.

Just as his take is seeming most dire, he promotes the idea of breaking free from this, and embracing your ability to solve problems, understand business, and bring efficiency to whatever domain you're working in by going it alone (or with a pack of like-minded individuals) as what he calls an "efficiencer". This part is the most empowering, and if you've ever had the spark or inkling to "start your own thing", it'll get those juices flowing yet again.

Read this book! I'd say, if you're a "big picture" developer like me, you would even enjoy reading it cover to cover versus a topical skim. So many things that have bothered me over the years, or that frustrated me, were captured and put to words very effectively, that reading it was almost cathartic. At the same time, the latter quarter of the book outlining a hopeful way to move the industry forward was a positive way to end the journey. Interviews in the appendix make for some helpful application of going the "efficiencer" route he details. I can't recommend it enough!

Once suspended, syntopikyle will not be able to comment or publish posts until their suspension is removed.

Once unsuspended, syntopikyle will be able to comment and publish posts again.

Once unpublished, all posts by syntopikyle will become hidden and only accessible to themselves.

If syntopikyle is not suspended, they can still re-publish their posts from their dashboard.

Once unpublished, this post will become invisible to the public and only accessible to Kyle Walsh.

Thanks for keeping DEV Community 👩‍💻👨‍💻 safe. Here is what you can do to flag syntopikyle:

Unflagging syntopikyle will restore default visibility to their posts.