When Amazon Alexa launched in 2014 as the first major home assistant platform I was captivated by the opportunities it offered someone like me. Clearly I wasn't alone either as over the coming years we saw a boom of new generation electronics incorporating virtual assistants in their sales pitch.

Now having voice assistant support is almost a must when launching any kind of home appliance, however this consumer demand is beginning to force hardware manufacturers to operate in a space that is very new and full of bad actors. Not all companies are technology first, so when their teams are asked to equip their white goods with internet capabilities there is a lot of room for error. This is why I believe Amazon Alexa Gadgets are a really big deal.

By the end of this article you will have everything you need to build your own gadget by using source code I've provided to build this simple Alexa powered cat feeder.

What is a Gadget

To understand the difference between an Amazon Alexa supported device, and an Alexa Gadget, you should first understand how most companies would approach building a smart assistant enabled device currently. 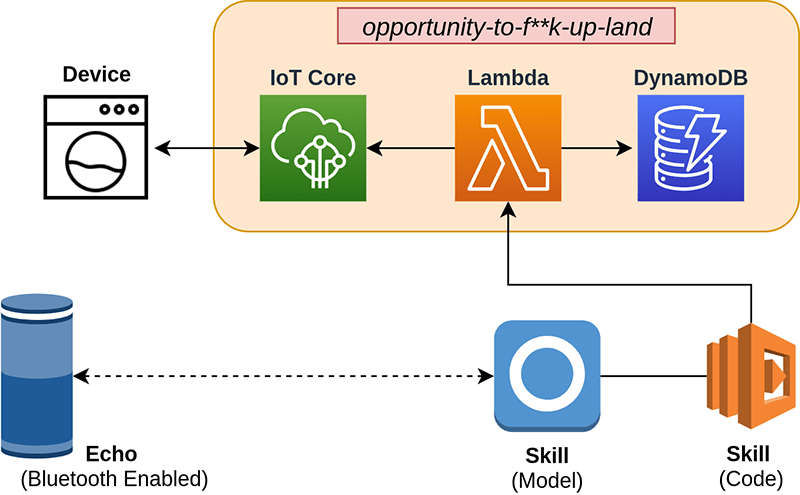 The architecture above is what you would usually see if the goal was to simply incorporate home assistant functionality.

The problem with this architecture is it relies on understanding a number of (potentially very new) services to tie everything together. While there is nothing inherently wrong with the design, it leaves room for error.

Alexa Gadgets on the other-hand are meant as simple companions to exist Alexa devices.

If the goal for your product is to simply give it Alexa support then the design above is both simpler and less prone to security holes.

So you want to learn how to build a gadget? Well hopefully I can help demystify the process for you while we build something fun! We will be building an Alexa controlled cat feeder that is going to be controlled entirely through the Alexa Gadget interface.

NOTE: While you might need to follow all steps to get a working cat feeder, they aren't necessary if you just want to learn. You can still setup a gadget (in our case a Raspberry Pi) to receive events from Alexa!

To start with we will need to create a new Alexa Voice Service Gadget by heading over to the products portal. Click Create Product to begin.

Next you will be prompted to fill out a bunch of details about your new product. In our case we use the following details, however for your scenario feel free to change it up.

**NOTE: The important piece of info is you MUST select Alexa Gadget as the product type. 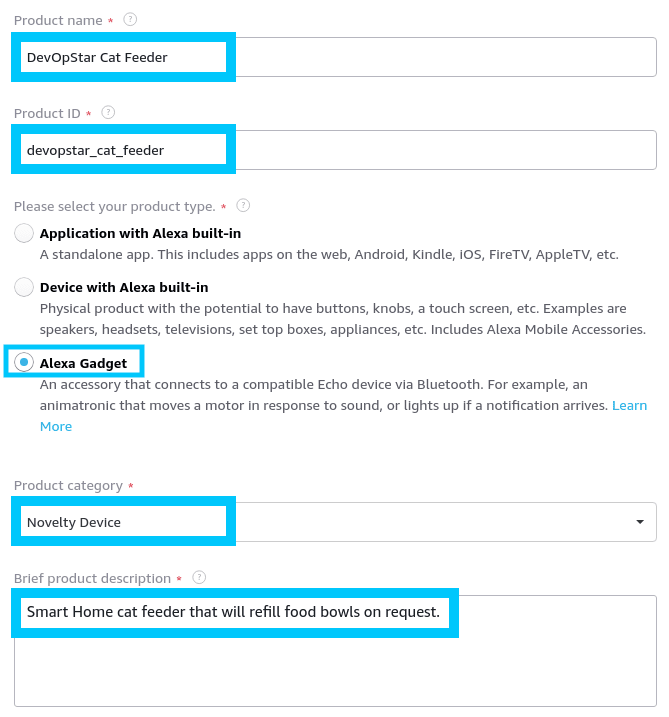 Once created, select your new product and take down the following information from the top:

Keep this information safe as we'll be using it in the next step when we setup the Raspberry Pi.

In this step we will configure our Raspberry Pi as a registered Alexa Gadget. This process will require you to have the following pre-setup.

Connect to the Raspberry Pi, in my case I'm using ssh by running the following:

**NOTE: you might need to replace raspberrypi.local with the IP address of the Pi on your network. same goes with the username pi if you changed it.

Pull down the alexa/Alexa-Gadgets-Raspberry-Pi-Samples GitHub repository by running the following command from the home directory on the Raspberry Pi. Once cloned we will also change directory into the folder.

Within the folder there is a launch.py file that we will be running in order to configure the gadget with the authorization we created earlier.

The process will go through and install / configure all the dependencies needed to run the Alexa Gadget service on the Pi. This includes but not limited to:

**NOTE: During the installation you will be prompted to agree with the Terms and Conditions of the bluez package. you can do this by typing **AGREE* when asked to*

The last thing you will be asked is if you would like to run the communication transport in BT (Classic Bluetooth) or BLE (Bluetooth Low Energy) mode. Depending on what Alexa device you have will dictate which mode to choose. Here's a helpful list of devices and their support you can refer to.

Congratulations! You've finished setting up the Alexa Gadget device. We can now move onto writing code to handle Alexa invocations.

Okay, so you have a Raspberry Pi ready to become a gadget, but we still don't understand how Gadgets work. Let's dive into how we can structure a simple one.

At the heart of any Gadget project is the following folder and two files. For the sake of simplicity, put this folder along side the other examples in alexa/Alexa-Gadgets-Raspberry-Pi-Samples.

The project .ini file will contain the Amazon ID and Secret that you retrieved from the product creation step above; along with a set of capabilities.

Each capability will expose a different event to the custom code you write later on in the .py file. It will make more sense in a second.

Below is a blank template for the capability file above. The functions defined below will be triggered when Alexa receives each of the capabilities we subscribed too above.

An example might be that we would like to run some custom code to switch on an LED whenever an alarm finishes ringing. For this we could add some code to the on_notifications_clearindicator function like so.

NOTE: For information on other Gadget capabilities, refer to the offical documentation.

When you are ready to deploy the Gadget code and test functionality, run the following from the root folder inside alexa/Alexa-Gadgets-Raspberry-Pi-Samples.

The final thing you will need to understand before looking at the cat feeder code is custom directives. These are similar to the capabilities above however instead of them coming from general Alexa interactions, they are custom and fire into a user defined namespace.

An example would best be illustrated by first looking at how the normal directives function. Below is the payload that is captured when a notification comes through.

See how the namespace Notifications matches the gadget capability we defined in the project_name.ini file. This means that we are able to define custom capabilities which become a namespace that can be utilised by our project_name.py code.

For example, lets use the example we'll also use later on called CatFeederGadget.

We can now create functions in the code to handle any custom directives we'd like in the python code.

When writing skill code later on we will be able to trigger these directives, or pass data to them by sending a json payload like below.

NOTE: Some of the information above might now quite make sense yet, but once we've linked all the skill code and gadget code together it will start to become clear.

Now that you have a basic understanding of how Gadget code works we can begin to design our cat feeder. Below is the design for how the Alexa skill will operate once completed. 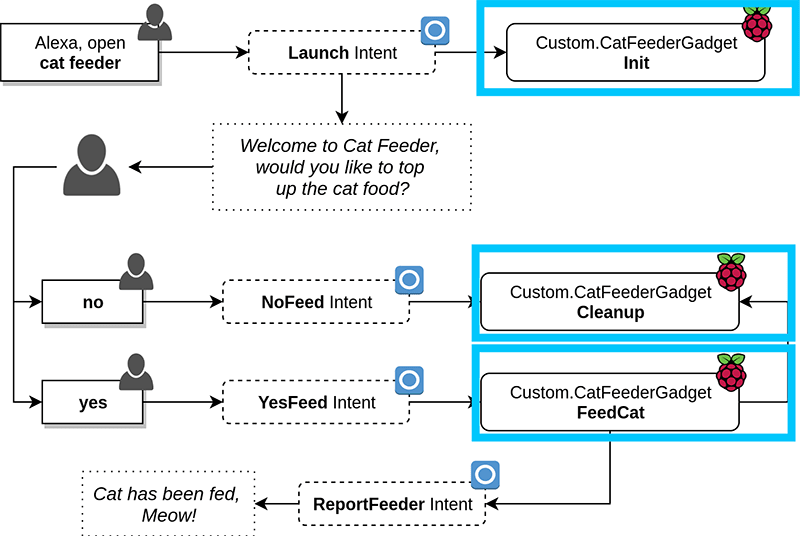 For this section we'll focus on the pieces marked with the Raspberry Pi icon. These are our custom directives that we will define in the CatFeederGadget namespace.

Goals for this directive are to reset the state of the cat feeder; which is done by calling a helper function called _reset_feeder(). The feeder should then light up the LED blue indicating that an action is about to be performed via Alexa.

The FeedCat directive is responsible for handling what should happen when a user wants to trigger the cat feeders primary function. This rotates a servo to an open position so that food can enter the cat dish.

Finally we use an important feature of Gadgets called custom events. These are a way to craft events similar to what we receive as a gadget on custom topics. In or case we want to be able to notify our Alexa skill of the fact that the cat feeder was able to perform its servo action.

In the next section you will see the CatFeederGadget.ReportFeeder event be handled in our Alexa skill.

Finally we have a directive to reset the state of the cat feeder. This is purely a wrapper for the aforementioned _reset_feeder().

With the Gadget code deployed we are able to move onto the Alexa Skill portion of this project. The intents that we need to define are labeled with the Alexa icon in the diagram below. 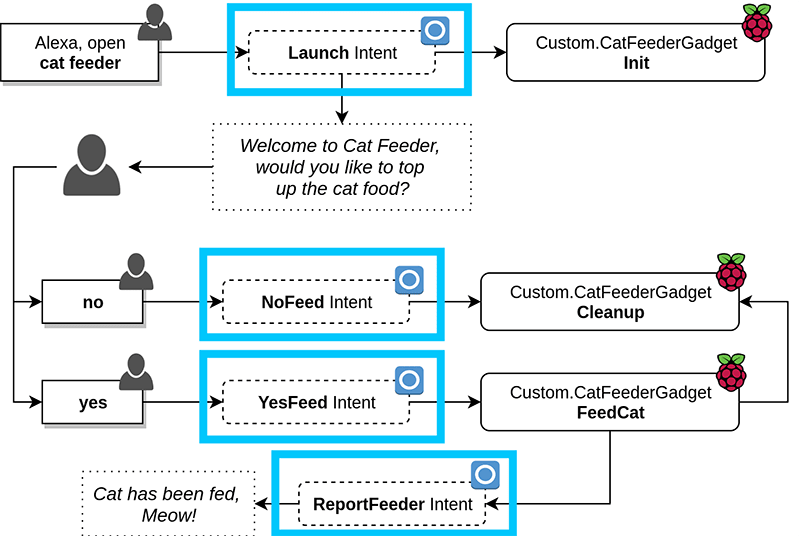 **In the interest of time* We’re not going to be going over each and every line of code for this project. Instead I recommend you copying across the contents of this project and following along with the guide.*

If you’re really keen to learn and understand what each line of code does, I highly recommend checking out my course Alexa Skills Kit: Practical Chatbot Development.

The code within the Launch intent is responsible for checking if the incoming request has an Alexa device with a Gadget attached. If so it takes the endpoint identifier and stores it in the session attributes.

Then we can see where we fire off our very first custom directive. These are the events that get captured and acted on by our Gadget from the previous section.

Taking a quick look at the directive structure that is being send, you will see that it's very straightforward and follows a standard JSON format. The example below is from the Init.js example in lambda/custom/directives.

The No intent is very similar to the launch intent, however it calls the aforementioned Cleanup directive.

The Yes intent is where things get interesting as we need to setup a listener to have Alexa wait for a reply from the feeder. The StartEventHandlerDirective is used for this and defines that ReportFeeder event that we used in our Gadget code as the source to listen to.

A timeout and custom response in the event that the directive is no full-filled must also be defined.

While this is not necessarily an Intent, it is structured and caught in a similar manner to other intents in the Alexa Skill lifecycle. There's a few pieces to this intent that I'll break down individually.

Since we don't want any random Intent to be triggering our ReportFeeder directive we extract the session attribute for the token provided in the StartEventHandlerDirective from the previous step. Thi ensure that only the Gadget that initialised the feeder will be able to close out the Gadget lifecycle.

The second half deals with the outcome from the ReportFeeder event. If you recall back to the python code we sent a JSON payload indicating that { feed: true } when the feeder runs. This payload is what determines if we alert the user to the fact that the feeder worked as intended. Alternatively if we don't get a valid payload, the user is alerted to a possible I/O issue.

NOTE: The cleanup directive is also fired after each of the outcomes.

There are a number of other directives and intents not mentioned above due to time. The are summarised below:

The final section is optional for anyone who actually wants to build the functioning feeder. The circuit diagram for the three main parts can be seen below, and you can assume resistors are 220Ω. 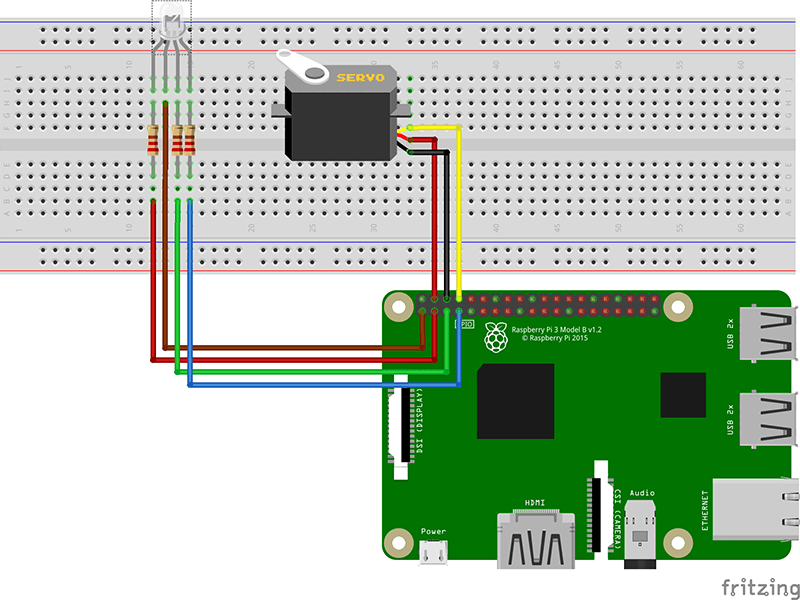 Pinouts can be seen below:

Attaching the circuit to the cat feeder should be done properly, however I only had blu tack at the time of building so this is what I ended up with 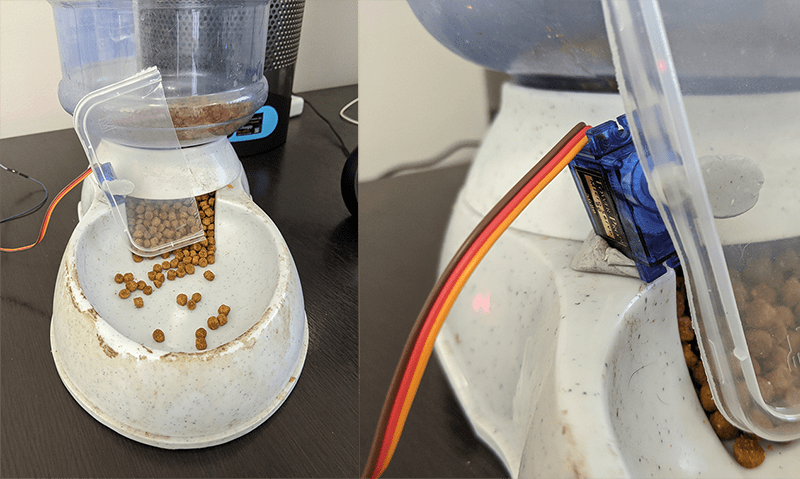 Optimize your workloads for Sustainability