This is a small, naive project I started because I remember one day wondering, "how would I visually diff binary files for small subtle changes?" I cannot remember what it was I was trying to inspect at the time, but I know it's not been the only time I've wanted to do this. So here we are.

When asking the Internets about diffing binaries, there are some lackluster answers on StackOverflow that suggest to "just use hexdump and then diff." (like this)

The problem is that if you use hexdump, you can be guaranteed that after the first change, unless the byte count remained the same between the files, the entire remainder of the stream (swathes of null-bytes notwithstanding) will be different from its counterpart for each file, owing to the offset codes and the displacement of the bytes.

For example, two files in which there is a list of animals, where only one line has changed, with diff run on their hexdump outputs, shows:

Because of the displacement of the bytes, diff decides to tell me that the files are fundamentally different at every point.

The tool I knocked together (in one afternoon, that's to say how naive it still is) gets around that by artificially re-introducing the concept of "chunks".

Where diff is most useful is in showing which parts of source code have changed, and then recognising the rest as "unchanged", but to do so it has to work on its smallest data sequence - the line. There are no "lines" in binary files, so instead we need to pre-process the binary data and split it into chunks. In this way, even if the byte count at the point of change is different, diff will only show which chunk was affected. Once the chunk ends, a new chunk begins in each file, and since these are now identical, diff doesn't continue marking the two as different.

I used Python to implement a custom file reader (that could certainly be optimised for disk access efficiency, I know), the script uses a list of specific bytes it expects to split chunks on (currently, CR, LF and NULL). When it encounters a grouped sequence of such bytes (for example, the fields of NULL that occur in compiled programs), it keeps them all together as a single "terminator." This keeps the chunking sane.

In case it wasn't quite clear: 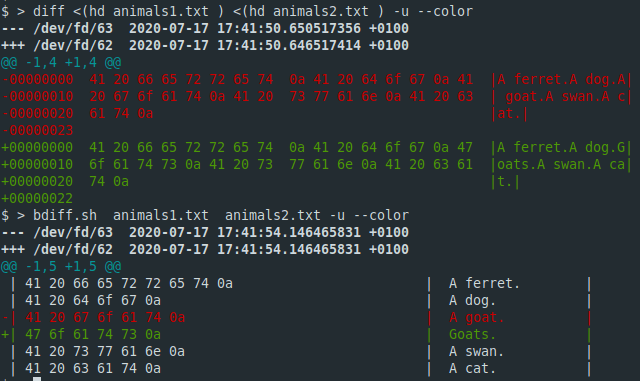 Lets say we have these two hello-world programs:

And we compile them each to hello.exe and adieu.exe.

The naive approach would be to do this:

After the first change in bytes, a vast swathe of the stream is highlighted as changed, even though only a few bytes changed (only interrupted due to a vast field of null bytes) 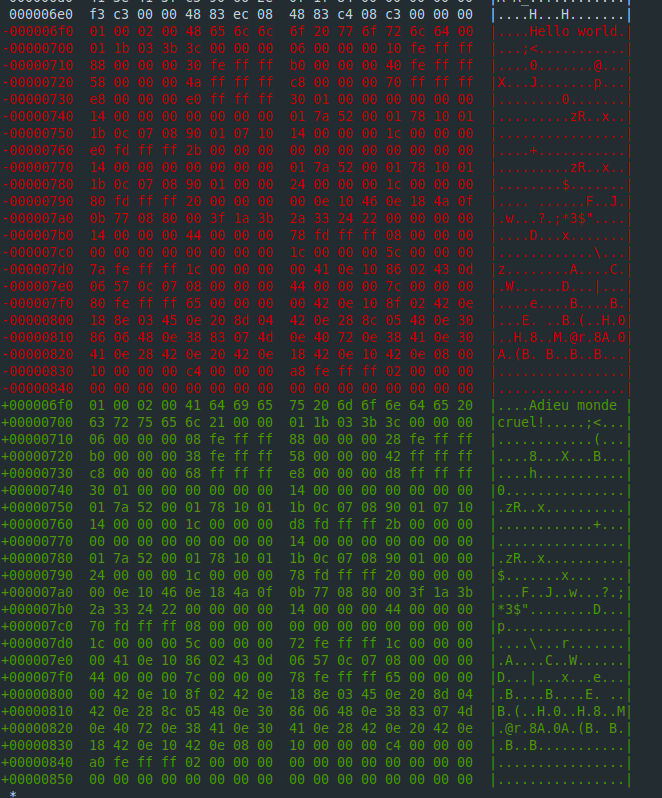 Conversely, you can run

As well as no longer needing to use the command/file substitution, we also see in the output that only the relevant chunks have changed. Whereas in the naive version we are none the wiser as to what byte sequences differed (because "everything" differed), we can see the more discrete and precise locations where the data differs. 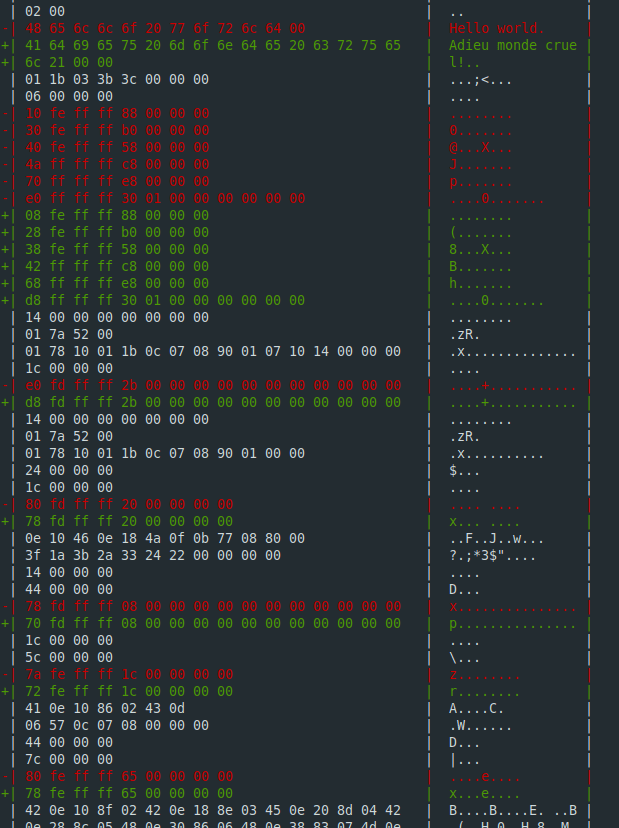 I doubt this tool will ever be of in fact production usefulness, but who knows. Other people were wondering too, so there must be some use-case.

I Created an 🤯 Online Multiplayer Game 🎮 in ReactJS and Python

Generate a Blog with OpenAI

Once suspended, taikedz will not be able to comment or publish posts until their suspension is removed.

Once unsuspended, taikedz will be able to comment and publish posts again.

Once unpublished, all posts by taikedz will become hidden and only accessible to themselves.

If taikedz is not suspended, they can still re-publish their posts from their dashboard.

Once unpublished, this post will become invisible to the public and only accessible to Tai Kedzierski.

Thanks for keeping DEV Community 👩‍💻👨‍💻 safe. Here is what you can do to flag taikedz:

Unflagging taikedz will restore default visibility to their posts.