I recently got the chance to present on the benefits of using GraphQL and Headless CMS to a JAMstack meetup in New York. The event was hosted by The New Dynamic at Postlight Studio.

TakeShape's combo of Headless + GraphQL + Static Site Generator makes for a pretty sweet CMS for the JAMstack. That's a lot of jargon so I’ll break it down:

Content is decoupled from presentation. The authoring environment is totally separate and disconnected from the website that your users interact with.
Because your artifact is pre-rendered html, css and JavaScript your experience is more performant, more secure and more scalable.

GraphQL is core to TakeShape. Every time you interact with content on TakeShape you’re interacting with GraphQL

Some users may feel more comfortable interacting with something visual so we provide an interface for non-technical users to manage content.

We built a static site generator that we think of more as a Static content generator. It’s a step lower of an abstraction. You can use TakeShape's static content generator as a way to generate a static website. But we wanted to keep it simple. GraphQL query + Template = html. We let you to bring your own build system to handle JavaScript and CSS however you like. 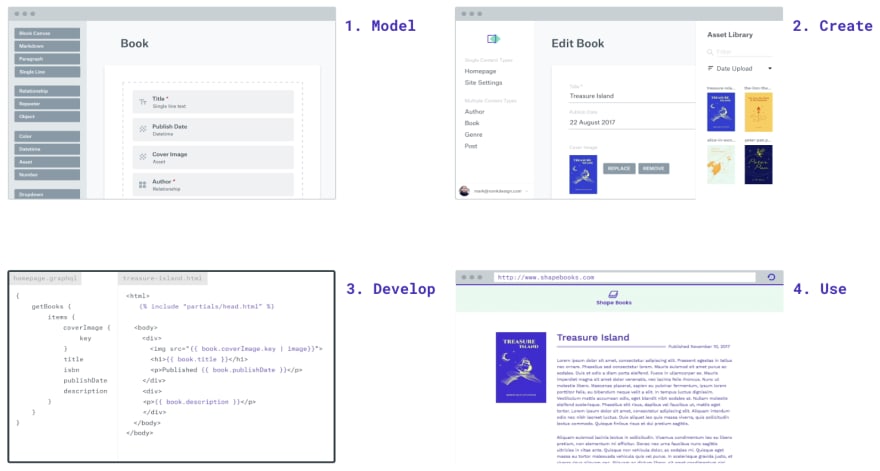 Deciding to use GraphQL

In the end, it came down to a few things

How we use GraphQL to build TakeShape

How Developers use TakeShape’s GraphQL API

Interested In Headless GraphQL CMS?
TakeShape is a headless GraphQL CMS that makes building JAMstack sites easier. At TakeShape we're building the best tools for managing content possible for the most creative designers and developers. Our project templates, make it easy to get started. Plus, pricing is downright affordable. Sign up for a free account and spend more time being creative!