JavaScript frameworks are developing at an extremely fast pace, meaning that today we have frequently updated versions of Angular, React.js and another player on this market - Vue.js. Let’s have a look at the demand represented in Google Trends for the last 5 years. The blue, red, and yellow lines represent Angular, React, and Vue.js respectively.

It can be seen from the chart that during 2014-2015 there was a small difference between the number of React and Angular inquiries. Then, we see that deviation between them increased for some short period. From the middle of 2017, these requests balanced and React started to grow and reach closer to Angular’s demand. The Vue.js framework was still not popular very much, but it was slightly increasing its presence on the market of frameworks, showing a potential for further growth. In the last years, Angular and React almost balanced, meaning that they are the most usable frontend frameworks on the market.

Overall, React and Angular develop organically with relatively the same dynamics. If we try to forecast the demand for these frontend frameworks, then we can see a positive tendency for React while Angular has a bit of a declining one. Vue.js is still not clear, but according to its specific convenient structure, it’s going to grow as well, maybe just a bit less than main frameworks.

We also analyzed the number of open positions worldwide that require a specific knowledge of a certain framework. As a source, we looked at Indeed.com and got the following distribution according to more than 60,000 job offers. 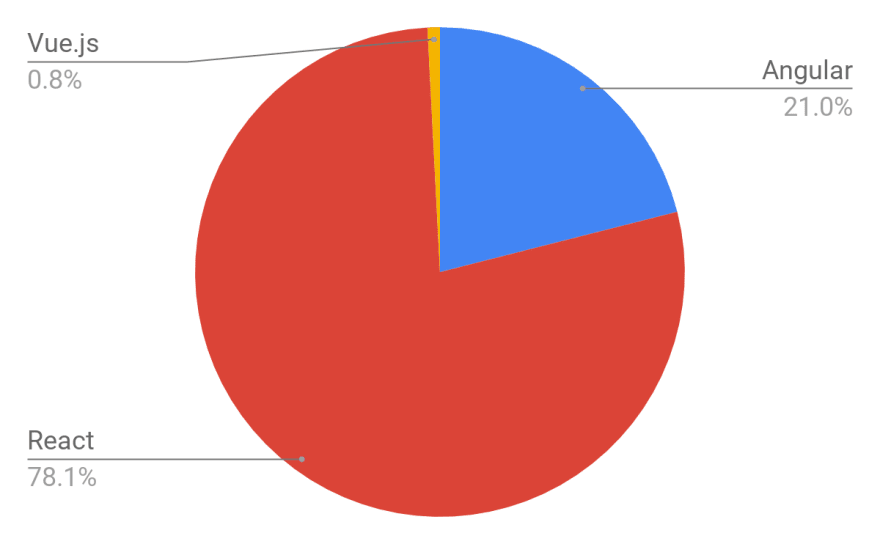 Taking into account the following data, we decided to share the main advantages and disadvantages of every frontend framework and help tech professionals or engineers to choose the best one for their development needs.

Pros and Cons of Angular

Angular is a superheroic JavaScript MVVM framework, founded in 2009, which is awesome for building highly interactive web applications.

The disadvantages of Angular:

Companies that Use Angular

The first version of Angular was released by Google in 2010. The most current version released in 2019 is Angular 2+. Today, popular companies using Angular include Google, Microsoft Office, and Upwork.

For example, Angular provides Google a highly functional framework to create larger applications. It is used in developing Google Cloud Console. Microsoft Office was able to launch two stand-alone applications with the help of the Angular framework. With the case of Upwork, it uses the framework to provide a responsive experience for its members.

Pros and Cons of React.js

ReactJS is a JavaScript library, open sourced by Facebook in 2013, which is great for building huge web applications where data is changeable on a regular basis.

Big billion dollar companies using React is proof of how good a framework is. Apart from Facebook, most of the well known famous companies that use ReactJS are Twitter, Amazon Prime, Udemy, Expo, Codesandbox, Uber, and Pinterest. But Facebook is in the center of it.

For the most part, React is a great tool for the above services as they have high traffic. React provides a faster way of building and maintaining mobile applications. Also, these companies can build applications while using fewer resources. It is the best frontend library in existence.

Pros and Cons of Vue.js

Vue.js is a JavaScript framework, launched in 2013, which perfectly fits for creating highly adaptable user interfaces and sophisticated single-page applications.

Vue.js fully-fledged framework is kind of a latecomer but there are many companies using it. Some of the companies using Vue also include Google, Apple, Trivago and Nintendo. Google was able to use Vue for its career page while Nintendo included this framework into its website. Trivago, one of the most popular sites to search for hotels, incorporated Vue in their magazine. Apple on the other hand used Vue to create their SwiftUI tutorials. Actually, many more companies are shifting their codebases every month and it has around 140K start at the GitHub platform.

How to Choose a Perfect Framework for Your Project?

How do you know which to use, Vue vs. React vs. Angular? What is the best way to maximize the benefits of each framework? How do you know when to use React or Angular? Based on the advantages and disadvantages of each, here is a guide to help you decide.

When to Use Angular

When to Use Vue.js

Which is better when comparing Vue.js vs. Angular? Some of the Angular disadvantages mean that you may pick Vue.js, therefore, use Vue.js when:

When to Use React

Which is better in React.js vs. Angular battle? React vs. Angular popularity is a close one with React being slightly preferred. The main reason why React is more popular when you compare React vs. Angular is because of the Angular drawbacks mentioned earlier. The great ecosystem of React make it a better solution for:

For a real engineer, there is no substantial difference which framework to choose, because it just takes some time to get used to the new one. In our company, we grow expertise in mostly React.js and Angular, but Vue.js is also on board. Every framework has its own pros and cons, meaning that there should be just a right choice for every single case during the product development. You might also like to check Javascript latest trends in another article on our blog.

TechMagic
All about JavaScript, AWS, and Serverless in one place.
TechMagic Successfully Passed the ISO Audit
#news #javascript
What are Project Deliverables in Software Development (Startup Founder's Guide)
#javascript #startup
How to accelerate JS development with the right approach
#javascript #webdev #devjournal #typescript

Once suspended, techmagic will not be able to comment or publish posts until their suspension is removed.

Once unsuspended, techmagic will be able to comment and publish posts again.

Once unpublished, all posts by techmagic will become hidden and only accessible to themselves.

If techmagic is not suspended, they can still re-publish their posts from their dashboard.

Once unpublished, this post will become invisible to the public and only accessible to TechMagic.

Thanks for keeping DEV Community 👩‍💻👨‍💻 safe. Here is what you can do to flag techmagic:

Unflagging techmagic will restore default visibility to their posts.