Welcome back to the backend master class!

In the last lecture, we’ve learn how to design a database schema with dbdiagram.io

Today we will learn how to install Docker Desktop on local machine, then download and start a PostgreSQL container.

We will also learn how to setup and use TablePlus to connect and interact with Postgres, and use it to run the SQL script that we’ve generated in the previous lecture to create our Simple Bank’s database schema.

Here's the link to the full series playlist on Youtube

After the installer is downloaded, we open it, and drag Docker into the Applications folder. And that’s it! Docker desktop is successfully installed. 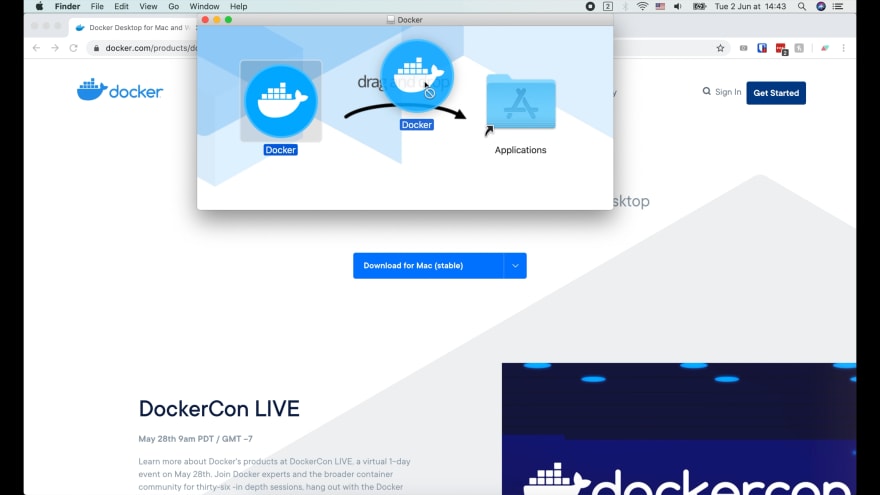 Let's open the app! It will take a while for docker desktop to start, you can see its status by clicking on this icon. 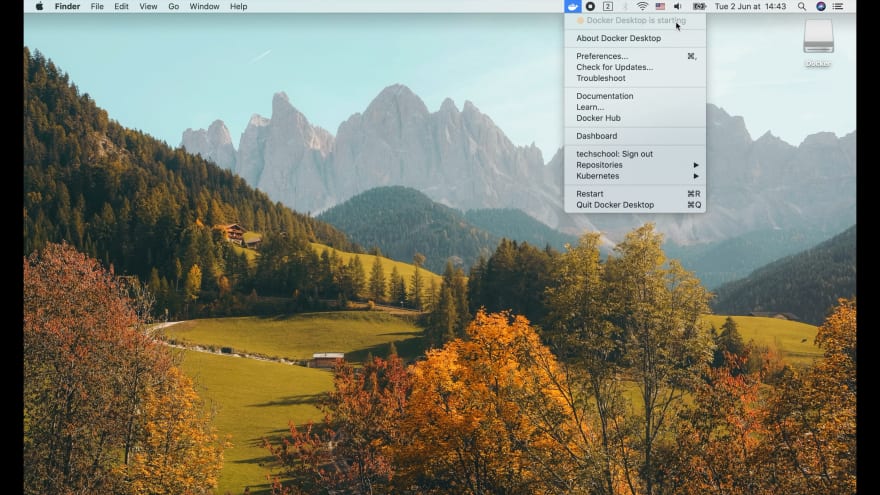 Now let’s open the terminal and try it. We use docker ps command to list all running containers. At the moment it’s an empty list because we haven’t run any containers yet. 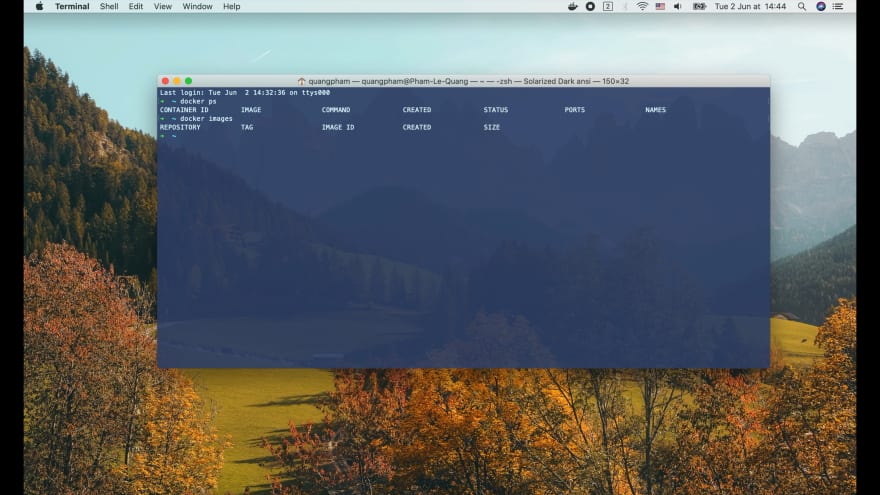 If we run docker images to list all available docker images. It’s also empty for now. So let’s learn how to pull the first image.

In this course, we will use PostgreSQL as the database engine for our app. So let’s go to Docker Hub to search for its image.

There are several results. But we’re gonna use the first one, because it is the official Postgres image. 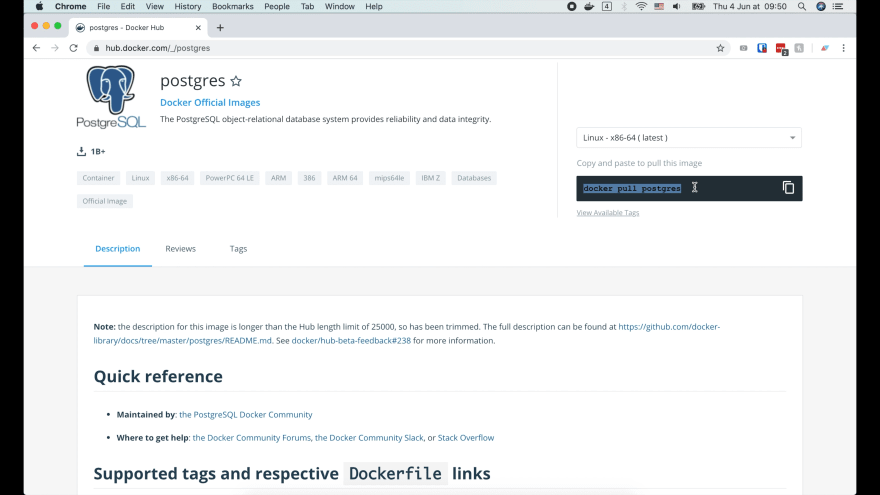 As you can see here, we can simply run docker pull postgres to get this image. This will pull the image with the latest tag. In this case, it is version 12.

There are many other versions with different tags as well. I often use alpine image, since its size is very small. Thanks to the light-weight alpine linux distribution.

So let’s open the terminal, and run:

The syntax to pull an image is docker pull <image_name>:<tag>.

We use a : to separate the image name and its tag (or version). You can apply it to download any other images of any version you want. 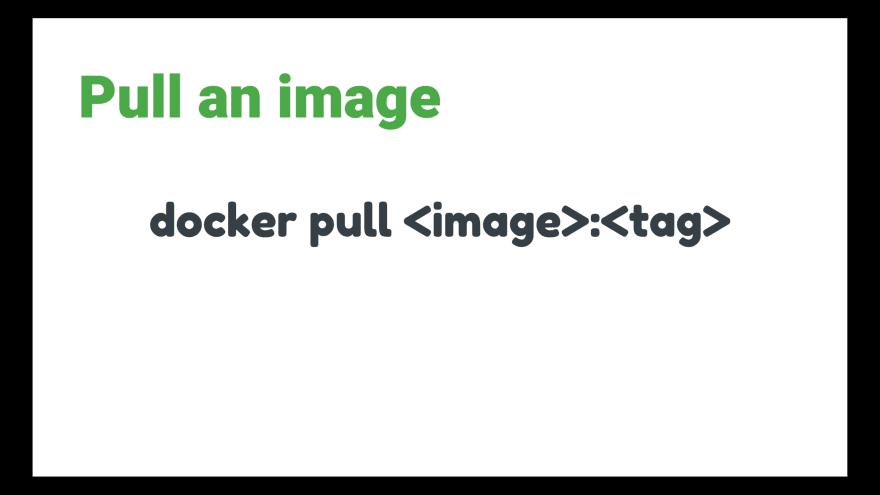 Alright, the image is successfully downloaded. Now if we run docker images, we can see the postgres image right here. 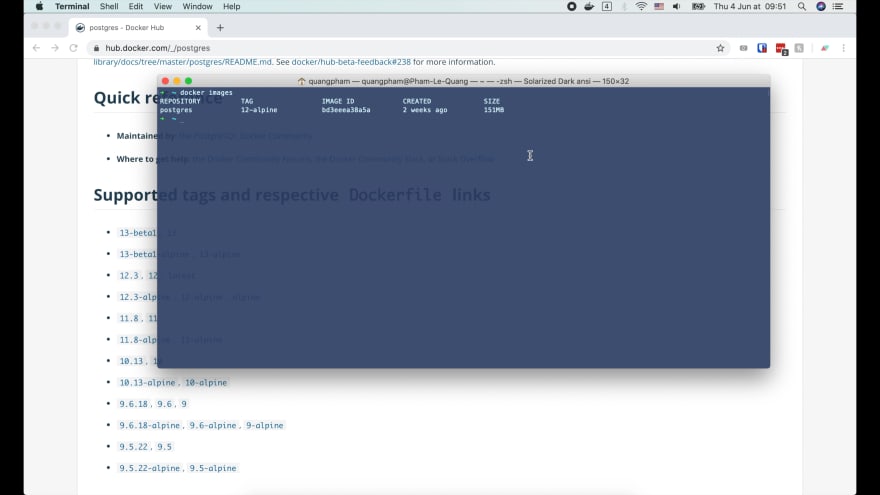 Its tag is 12-alpine. It’s also assigned a unique image ID. And look at the size of this image, it’s just around 150MB, pretty small.

OK, so now we have the Postgres image, let’s learn how to run it to start a Postgres database server container. We use the docker run command for this purpose. 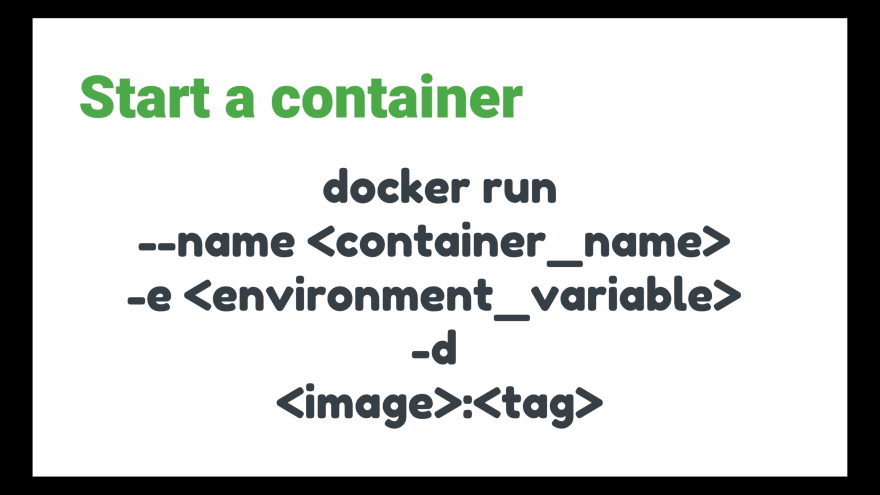 If you’re new to docker, it’s important to distinguish 2 terms: image and container.

Basically, a container is 1 instance of the application contained in the image, which is started by the docker run command. 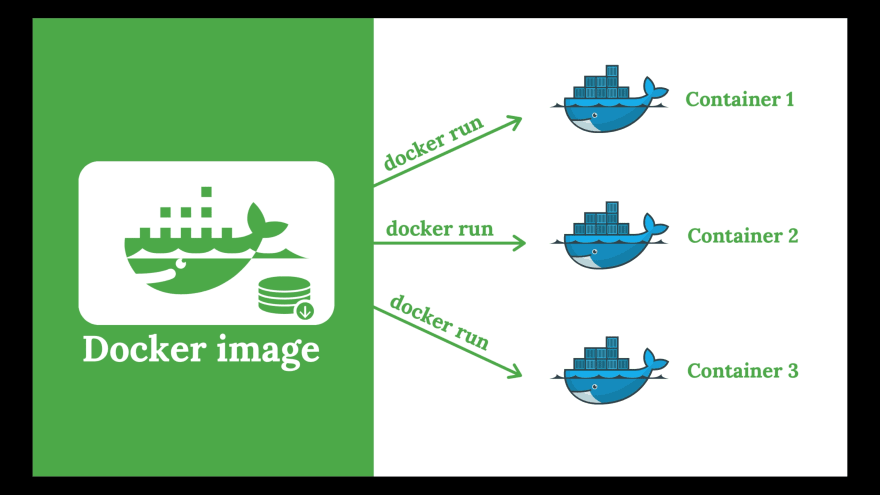 We can start multiple containers from 1 single image.

We can also customize the container by changing some of its environment variables.

For example, with the POSTGRES_USER variable, we can set the username of the superuser to login to Postgres. If this is not specified, the default username: postgres will be used.

Alright, now let’s run this command in the terminal:

Finally, one important argument we must add to this command is the port mapping.

Well, basically, a docker container is run in a separate virtual network, which is different from the host network that we’re on.

So we cannot simply connect to the Postgres server running on port 5432 of the container network, unless we tell docker to create one kind of "bridge" between our localhost’s network and the container’s network. 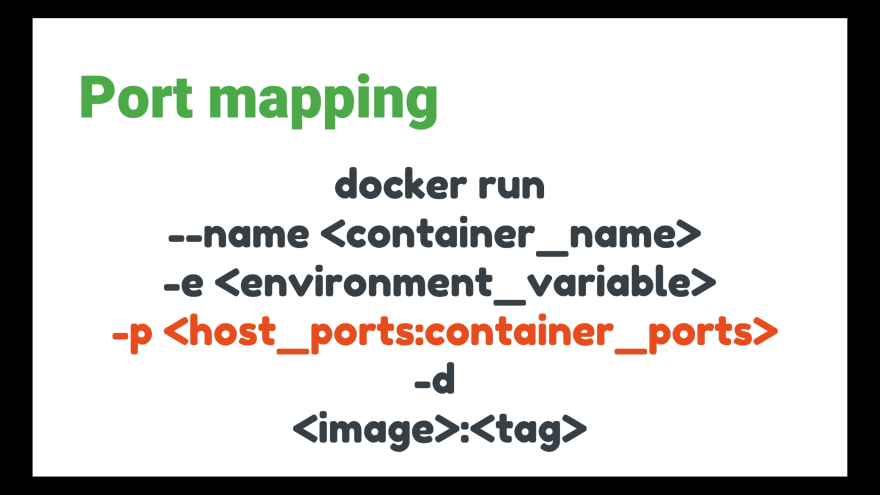 We do that by using the -p flag, then specify the port of the host network, followed by a colon, then the corresponding port of the container. They don’t necessarily be the same, but I often use the same port to make it easier to remember.

Now when we press enter, Docker will start the Postgres container, and return its long unique ID. We can list all running containers with docker ps command. 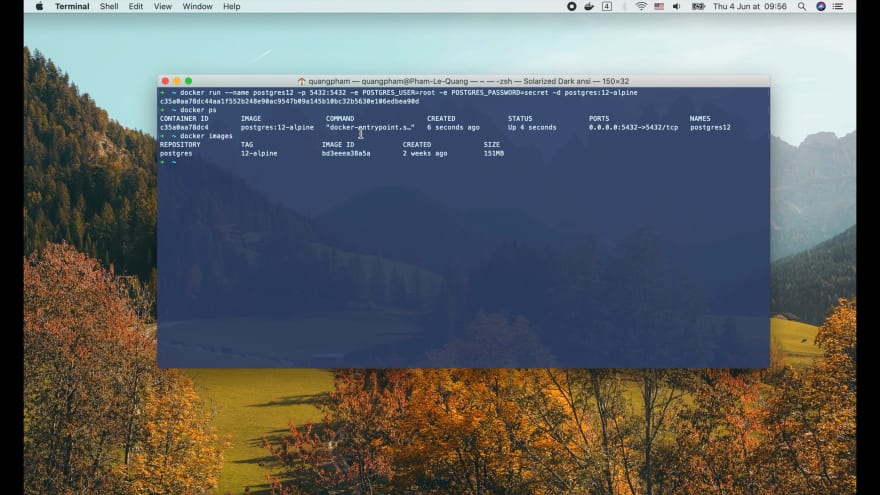 OK, now the Postgres server is ready, let’s try to connect to it and access its console. 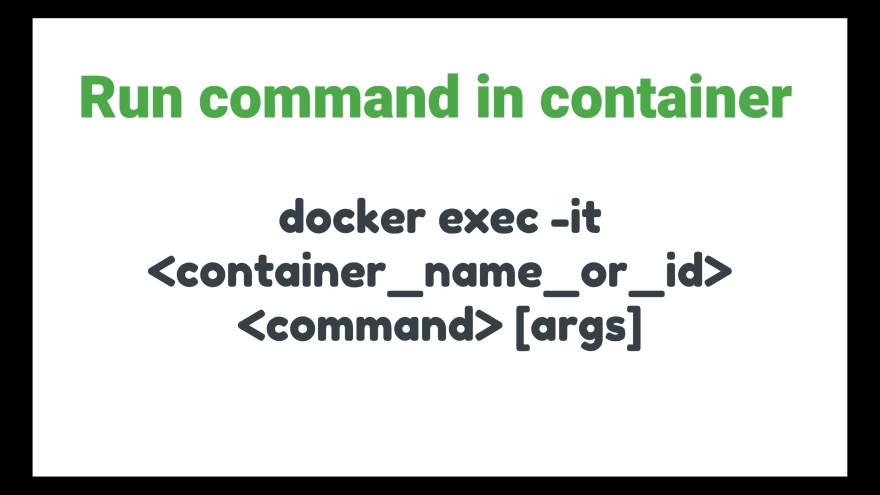 We can do that with the docker exec command. It allows us to run 1 specific command inside a running container.

And voila, we’re now inside the Postgres console. 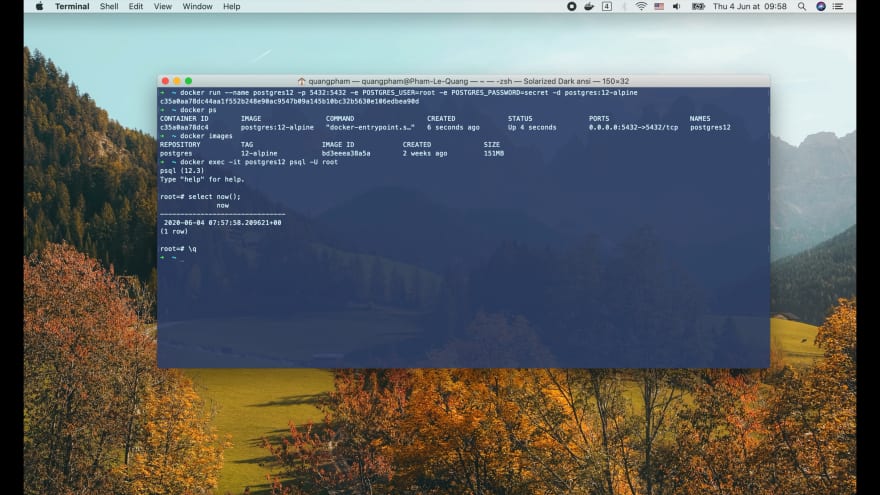 One thing you might notice here is: Postgres doesn’t ask for password, although we’ve set it when running the container. It’s because by default, the Postgres container sets up a trust authentication locally, so password is not required when connecting from localhost (inside the container).

We can try a simple query, such as select now() to get the current time. And quit console by \q enter.

One more thing I want to show you here is to display the logs of the container. 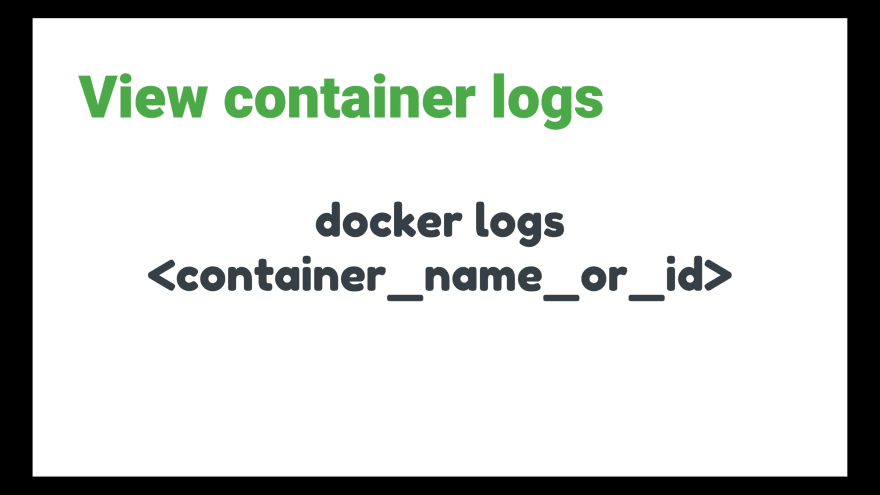 With this, we can easily check what happens inside the app’s container.

Alright, so now you know how to use some basic docker commands to interact with the Postgres container and access its console to run SQL queries.

I’m gonna show you another easier way to manage and play around with the database using Table Plus. 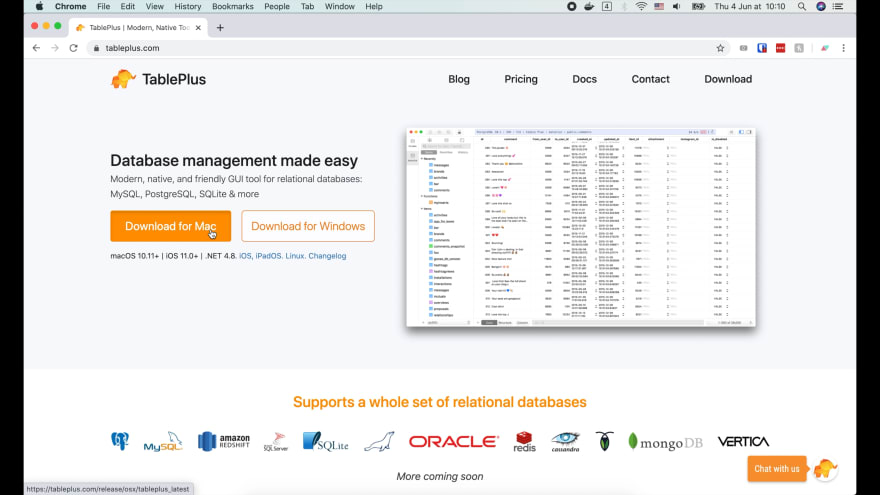 Table Plus is a GUI tool that can talk to many different kind of database engines, such as PostgreSQL, MySQL, Mongo, Redis, etc. It's very easy to use and will help us a lot in speeding up development.

OK, let’s go to tableplus.com to download it. Then open the installer and drag Table Plus to the Applications folder.

Now let’s open the app. There are no db connection yet, so let’s create a new one! 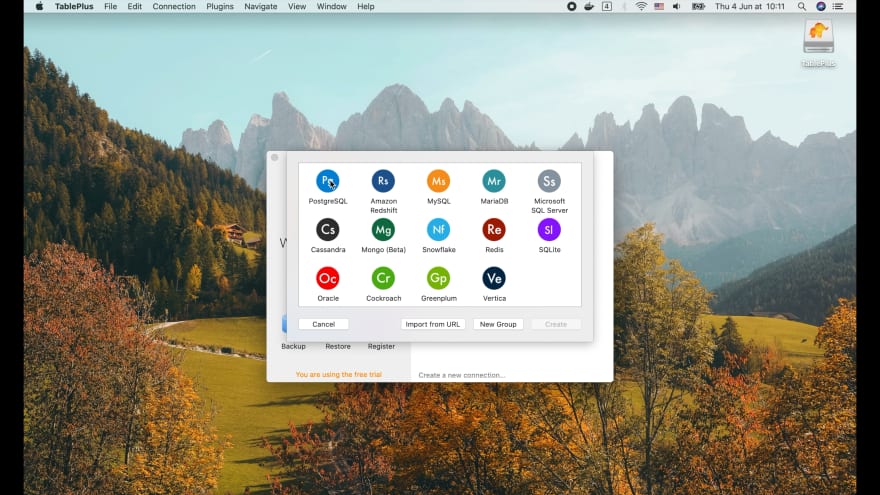 There are many database engine options, but in our case, we use PostgreSQL. 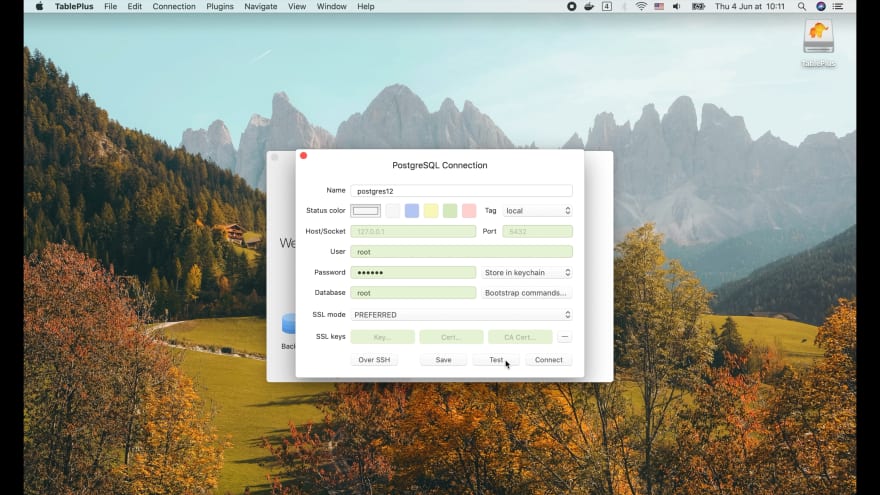 All green! So now we can click Connect to connect to the database server.

Everything is empty at the moment because we haven’t created the schema yet. But we can still run some queries by clicking on the SQL icon. Let’s try select now(); 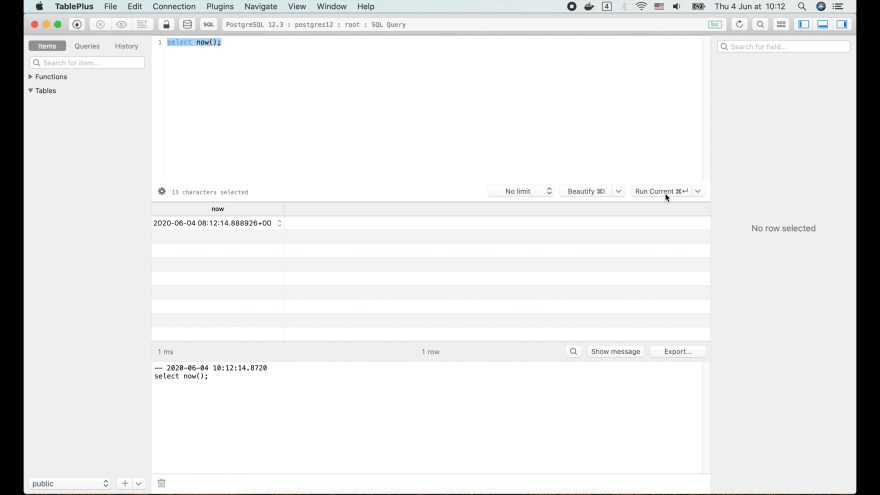 Then click Run current button, or simply press Command Enter. The result will show up in the below section.

Now let’s open the simple_bank.sql file that we’ve generated in the previous lecture. Then select all queries in this file, and press Command Enter to run them. 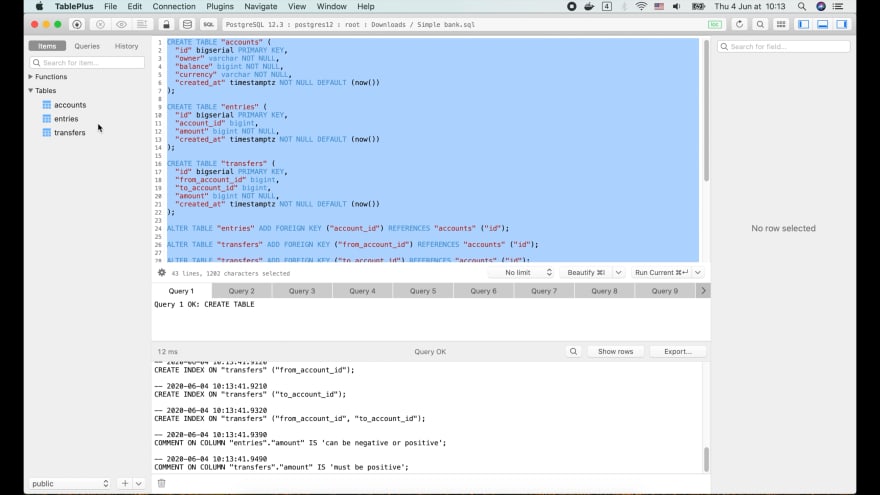 Now when we press Command R to refresh, 3 tables will show up on the left: accounts, entries and transfers.

We can click on their names to see the data, or select the Structure tab to see their schema structure. 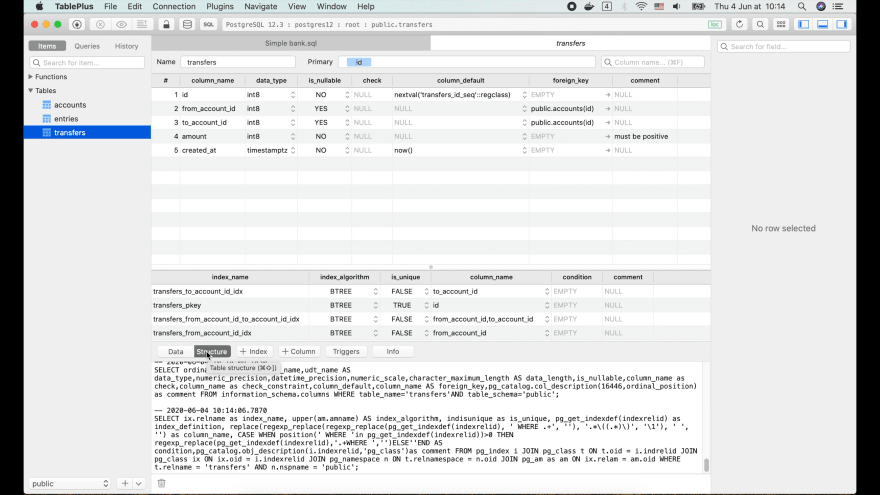 There are many useful information, such as the column name, data type, default value, foreign key, is nullable or not.

Looks like some foreign keys column are now nullable, which is not really what we want, because every entry or transfer must link to their accounts.

So let’s go to dbdiagram.io to fix this.

Now let’s remove the old file, and change the name of this new file. Then open it with Table Plus. 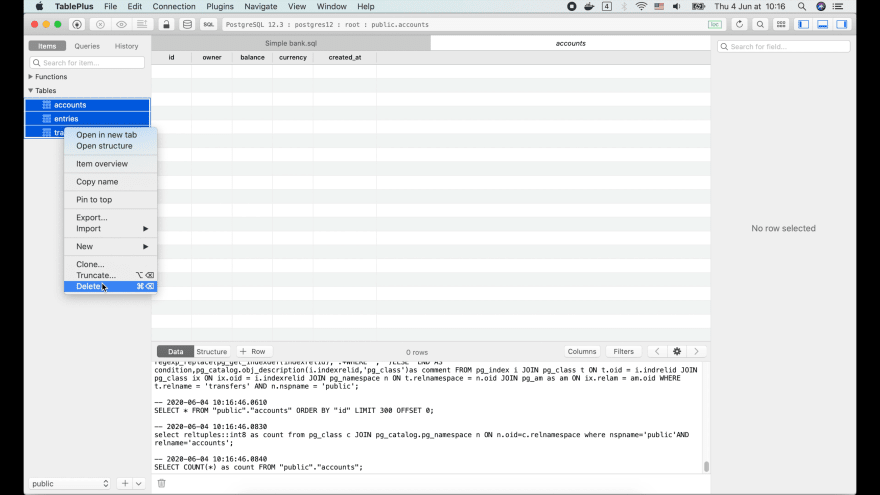 I’m gonna select all these 3 tables. Right click, and choose Delete. Choose Cascade to make sure all reference data will be deleted. Then click OK. 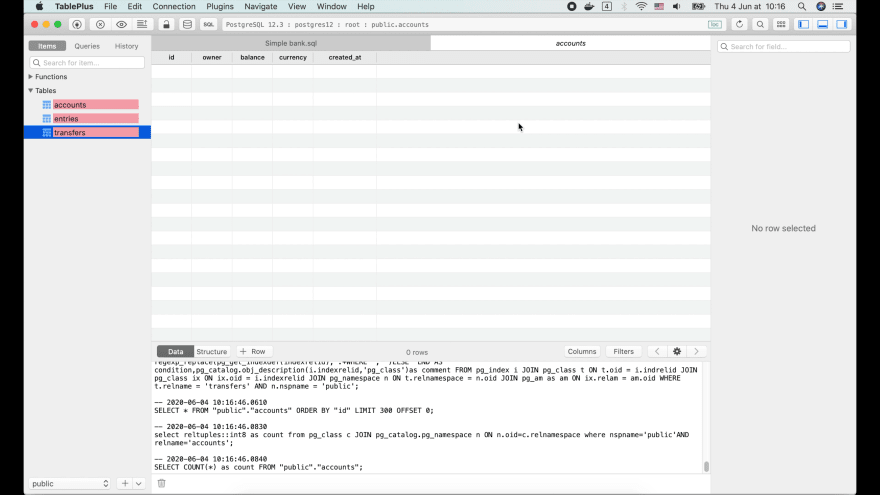 Now you can see the tables are still there, but they are marked in red. If we press Command S to save this state, the DELETE TABLE commands will be executed, and all tables will be gone.

OK now let’s select all queries in this new schema simple_bank.sql file. Run them and refresh. 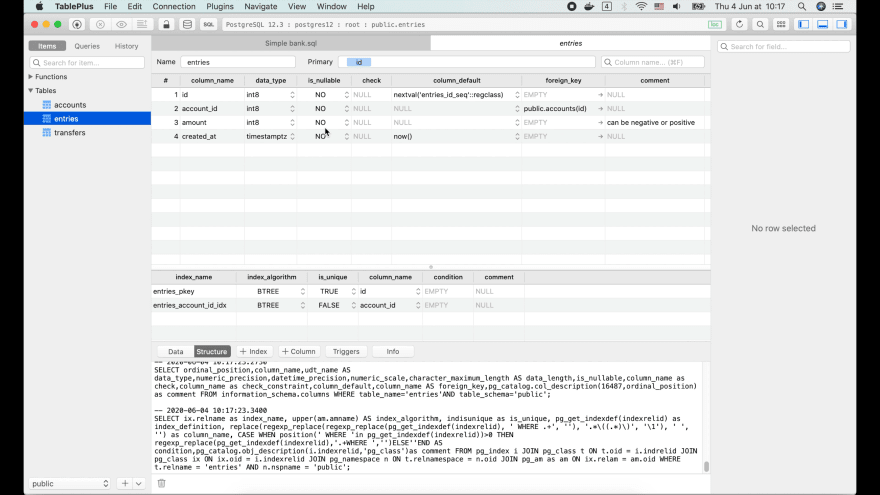 3 tables show up again. But this time, all columns are not nullable. That's exactly what we wanted.

We can also see the comment for the amount columns that we’ve written in the schema definition script. Awesome!

And that’s it for today’s lecture. I hope you find it interesting and useful.

Thanks a lot for reading and see you in the next one!

If you want to join me on my current amazing team at Voodoo, check out our job openings here. Remote or onsite in Paris/Amsterdam/London/Berlin/Barcelona with visa sponsorship.

How to Implement Drag and Drop in React

Understanding the concept behind designing a game

Once suspended, techschoolguru will not be able to comment or publish posts until their suspension is removed.

Once unsuspended, techschoolguru will be able to comment and publish posts again.

Once unpublished, all posts by techschoolguru will become hidden and only accessible to themselves.

If techschoolguru is not suspended, they can still re-publish their posts from their dashboard.

Once unpublished, this post will become invisible to the public and only accessible to TECH SCHOOL.

Thanks for keeping DEV Community 👩‍💻👨‍💻 safe. Here is what you can do to flag techschoolguru:

Unflagging techschoolguru will restore default visibility to their posts.