One benefit of moving business logic to Temporal is how Temporal implements retries and timeouts for Activities in a standardized way. This has the effect of adding a reliability layer atop unreliable Activities and Workers, in a durable and scalable fashion. However, understanding the terminology can be a bit intimidating at first glance.

This post (together with the embedded talk) aims to give you a solid mental model on what each Activity timeout does and when to use it.

Note: You can also set Workflow timeouts and retry policies you can set. This post deals only with Activity timeouts.

You can watch this 18 minute talk where our CEO Maxim Fateev explains the 4 Types of Activity timeouts you see in Temporal.

The rest of this post summarizes the main points covered in this whiteboard session, for those who prefer a written version. 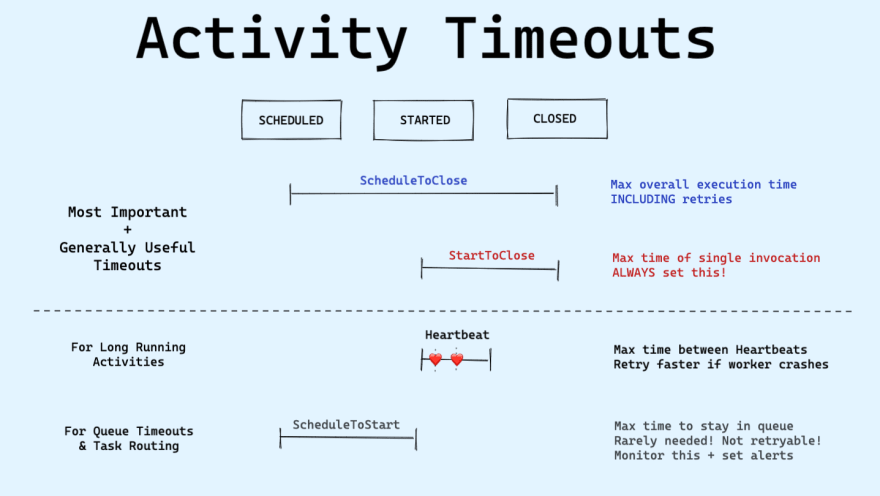 You can find the precise APIs in the reference documentation for each SDK: Java and Go.

Lifecycle of an Activity

To really understand how timeouts work, we should understand the typical lifecycle of an Activity as it journeys through the various parts of the system.

An activity SimpleActivity is first invoked inside a Workflow Worker on Task Queue sampleTaskQueue. The precise method of invocation differs by SDK, and timeouts are also specified up front as part of Activity options:

Behind the scenes, the SDK transforms this into a ScheduleActivity Command, which is sent to the Temporal Server.
This Command includes various metadata, including the activity type (SimpleActivity), activity task queue (sampleTaskQueue), and activity ID. A RetryPolicy was not specified, so Temporal uses the default Retry Policy.

Receiving the Command, Temporal Server adds an Activity Task to the Bar Activity Task Queue.
There is an atomic guarantee that these both happen together, to prevent race conditions.
We explained why this is important and how Temporal accomplishes this in Designing A Workflow Engine.

The Activity Execution is now in a SCHEDULED state.

The Activity Execution is now in a STARTED state.

The Activity Execution is now in a CLOSED state.

We have just described the "Happy Path" of an Activity Execution.
However, what happens when an Activity Worker crashes midway through an execution?

We use the Start-To-Close timeout to control the maximum amount of time a single Activity Execution can take. We recommend always setting this timeout.

The classic example for why the Start-To-Close timeout is relevant, is when an Activity Task has been picked up from the Activity Task Queue (STARTED state) but the Worker crashes after that (so the Activity Execution never reaches CLOSED state).

The Schedule-To-Close Timeout is used to control the overall maximum amount of time allowed for an Activity Execution, including all retries.
This timeout only makes sense if the Activity Execution has a RetryPolicy with MaximumAttempts > 1.

If you let it, Temporal will retry a failing Activity Execution for up to 10 years! (with exponential backoff up to a defined maximum interval)
Most Temporal developers will want to fine-tune retries to balance the user experience against the unreliability of the Activity Execution.

While you can control intervals between retries and maximum number of retries in the RetryPolicy, the Schedule-To-Close Timeout is the best way to control retries based on the overall time that has elapsed.
We recommend using the Schedule-To-Close Timeout to limit retries rather than tweaking the number of Maximum Attempts, because that more closely matches the desired user experience in the majority of cases.

There are some minor nuances to Heartbeats that may be of interest:

The Schedule-To-Start Timeout sets a limit on the amount of time that an Activity Task can sit in a Task Queue.
We recommend that most users monitor the temporal_activity_schedule_to_start_latency metric and set alerts for that as a production scaling metric, rather than setting an explicit timeout for it.

As a queue timeout, ScheduleToStart is unique in that it doesn't result in a retry — all a retry would do is pop the activity right back on to the same queue!

The Schedule-To-Start Timeout is most useful when you have a concrete plan to reroute an Activity Task to a different Task Queue, if a given Task Queue is not draining at an expected rate.
You can also reschedule a whole set of other Activity Executions or do other compensation logic based on this timeout.
This is a powerful feature for building ultra-reliable systems, however most users will not need this since you can horizontally scale the number of Workers easily.

Generally, issues with Schedule-To-Start are better addressed by scaling Activity Workers accordingly, rather than by adding timeouts.

Putting it all together - a recruiting example

We've recently found the terminology of timeouts useful even internally for our recruiting and realized that this could be a relatable analogy for most people.

As we are hiring heavily at Temporal, there is a lot of interview scheduling going on intermixed with our regular day jobs. You could model the end-to-end hiring process for a candidate as a single "Workflow" with multiple "Activities": sourcing, interviewing, making a decision, and then the offer process.

Specifically for the "Activity" of interviewing we've encountered some pain points:

To resolve this, we could think about setting some timeout policies (for clarity, none of these are real numbers): 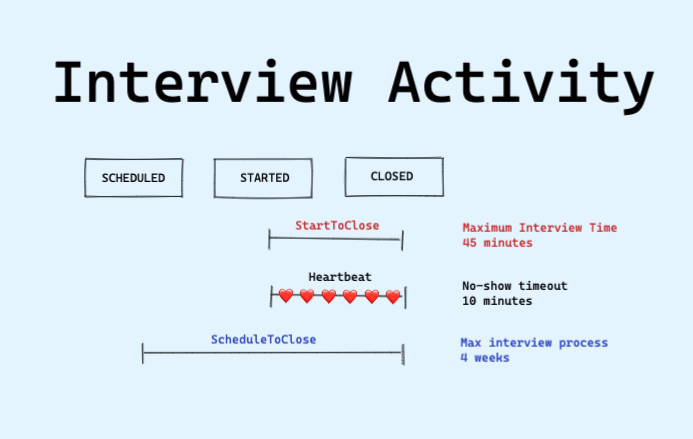 Should we set a Schedule-To-Start timeout? You could imagine candidates sitting a queue waiting to be interviewed, with not enough interviewer "Workers" to process them. A timeout here wouldn't help much, because there's no other queue to put them on. Better to set up monitoring and alerting on Schedule-To-Start latency, and scale up workers accordingly as needed (autoscaling is currently not possible).

Build a GraphQL Api in Go with gqlgen and Gorm