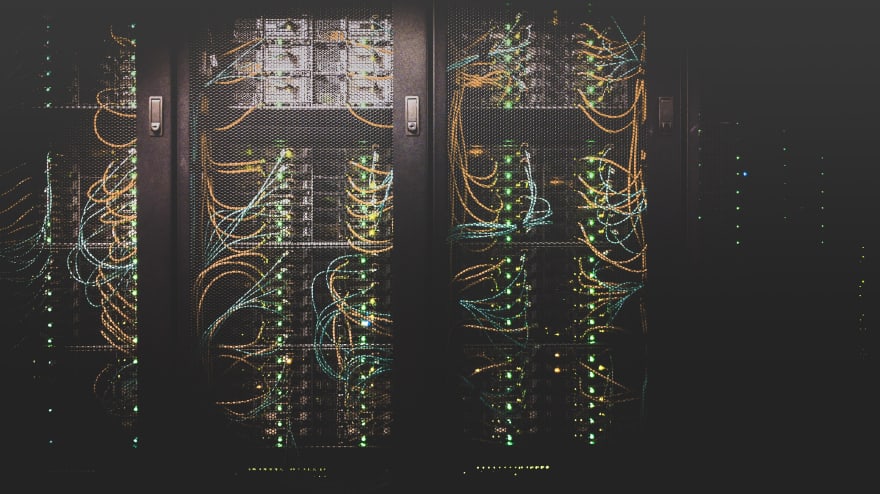 With the beginning of 2020 Elixir has been gaining a lot of popularity in the field of functional programming language. Being a software engineer who always looks out to try something new I instantly bought the idea of learning the language when it was introduced at my workplace by a fellow game developer.

As I started learning the language I found it a little difficult as I never wrote a single line in a functional way using Elixir. It promotes a coding style that helps developers write code that is short, concise, and maintainable which was pretty new to me.

As I dived into the language further I was introduced to the concepts of scalability, concurrency and fault tolerance. Everything about the language seems perfect the tooling to write, test and maintain code is smooth. Also when companies like Discord and Square-Enix are using it to handle large user base in real-time it gives a lot of credibility to the language.

The area where elixir shines is handling scalability and fault tolerance. As it can be pretty daunting to wrap your head around the concepts I decided to document every task that I did to get hold of the concepts in the easiest possible manner. This post and the posts to come deal with the concepts of writing concurrent and fault-tolerant code using Erlang’s OTP(Open Telecom Platform) behaviours, so if you are new to Elixir you might want to skip this post as it might be a little challenging to get directly into the intermediate parts of the language.

I am not going to dive deep into what Elixir is and how it runs on a system as this post is more about using OTP behaviours in Elixir to achieve concurrency and fault tolerance.

What to expect from this article 🤔

This will be a 7 part article where we will be learning Elixir concepts by building and continuously improvising a key-value store application. The application would let you simply create, update and delete a value in a store.

Before beginning make sure you have Elixir and Mix installed in your system.

This command should create your project structure like this 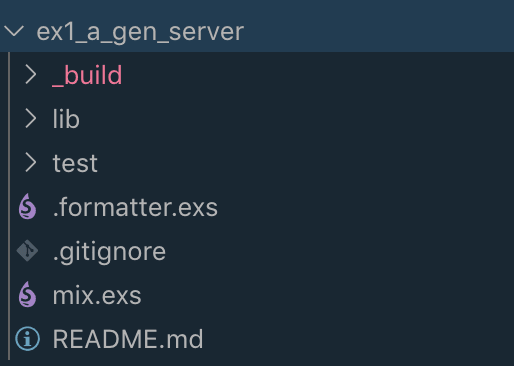 delete all the files in the lib folder and create a file with name server.ex

The key-value store that we are going to build would be a simple process that should do the following three tasks.

Now let’s discuss what is a Genserver.

A Genserver is behaviour module for implementing the server of a client-server relation.

It is a process like any other Elixir process and it can be used to keep state, execute code asynchronously and so on. The advantage of using a generic server process (GenServer) implemented using this module is that it will have a standard set of interface functions and include functionality for tracing and error reporting. It will also fit into a supervision tree(We will discuss this later in the coming posts).

So we are going to maintain our state i.e. the key-value store in the form of a map in a GenServer process and we are going to talk to the process in an async way by message passing.

In order to make we create out key-value store app we need to implement these three callbacks in our server. init/1, handle_cast/2, and handle_call/3. 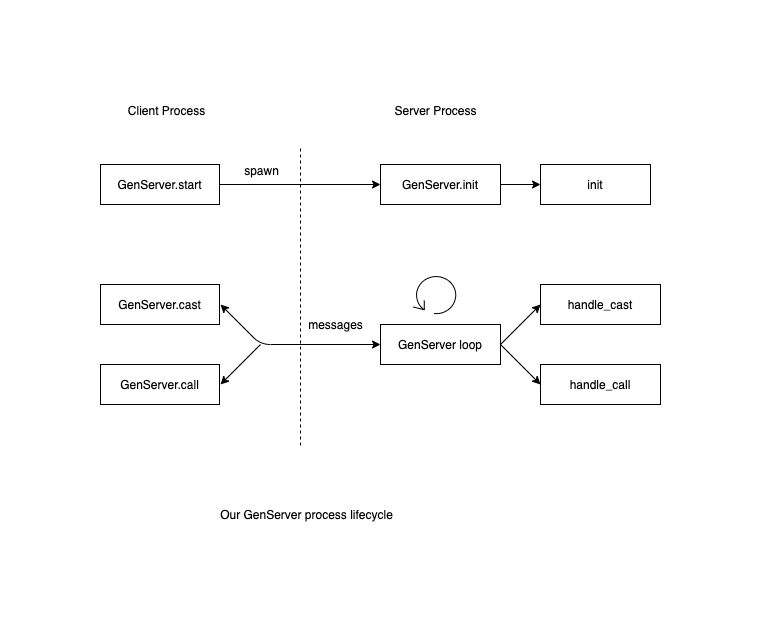 Show me some code 👨‍💻 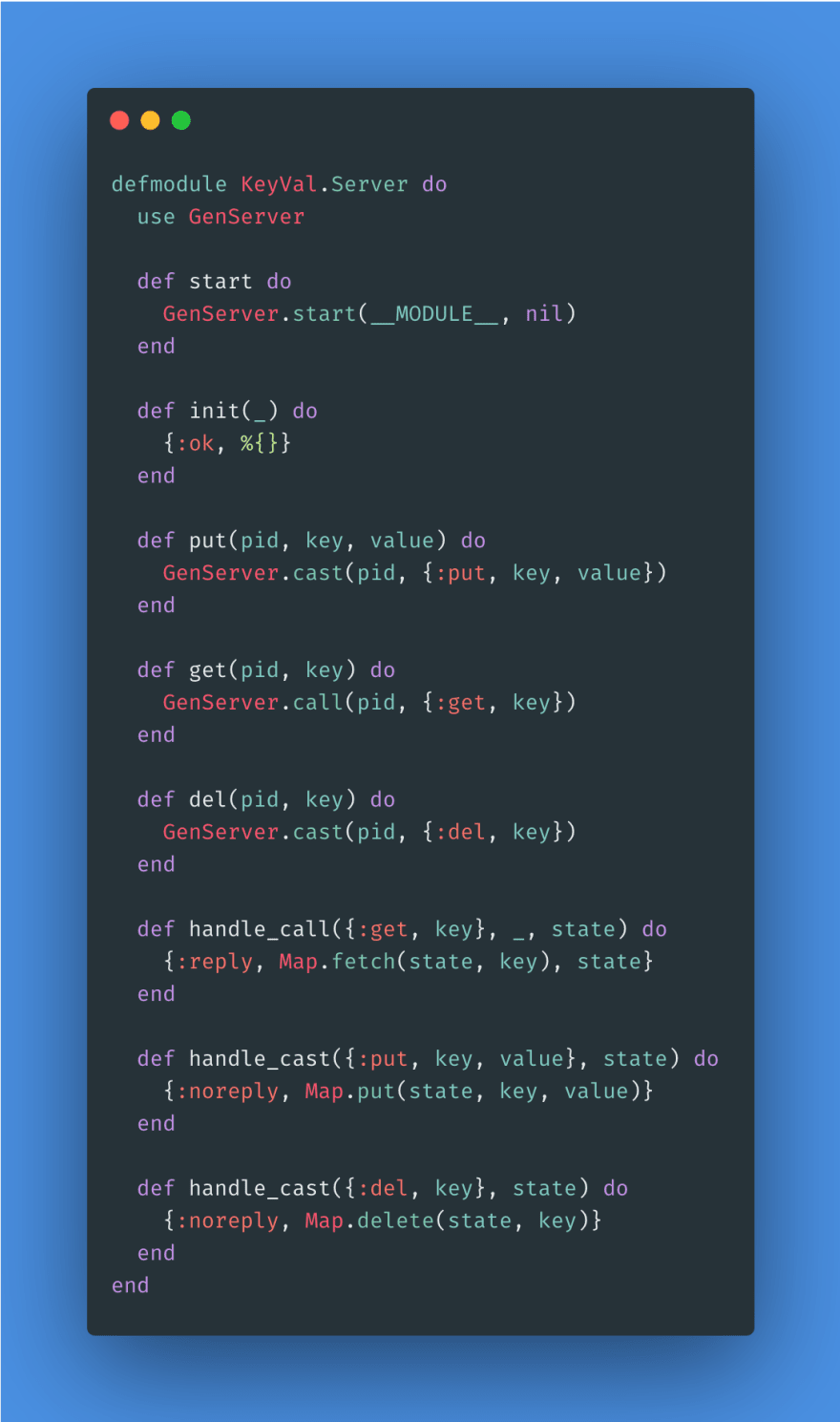 Ok, so here we start our GenServer by calling GenServer.start/2. The first argument is the module itself while the second argument can be any arbitrary argument that you want to pass to the server while it’s initialization.

On starting the server we store the PID in a variable and then all the communication is happening using the PID of the process. 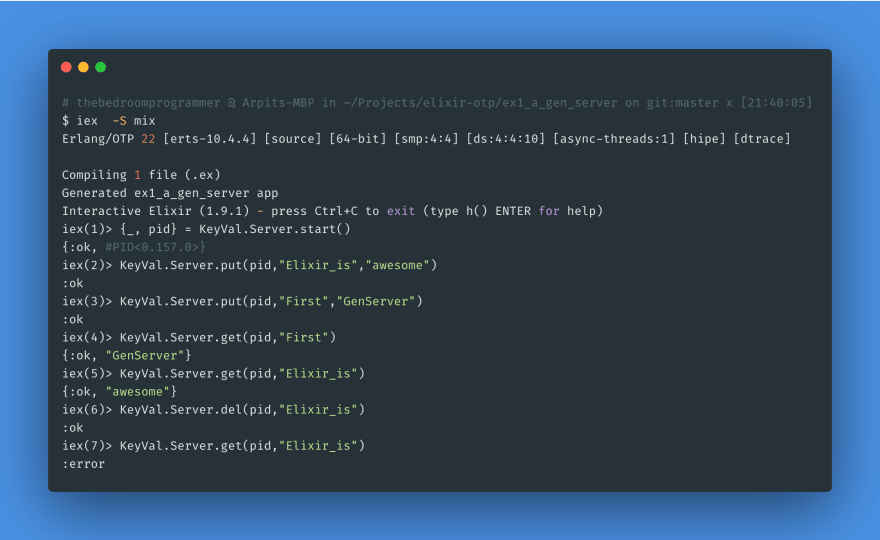 You can use the exposed put, get and del functions on the Server module to perform operations on the key-value store all you need to remember is the PID of the store process that you started.

This is the basic implementation of a GenServer in Elixir. I hope this post has helped you get a little bit better understanding of the whole process.

The complete source code of all the parts are here.

Manual cropping of images in Drupal 8

Once suspended, thebedroomprogrammer will not be able to comment or publish posts until their suspension is removed.

Once unsuspended, thebedroomprogrammer will be able to comment and publish posts again.

Once unpublished, all posts by thebedroomprogrammer will become hidden and only accessible to themselves.

If thebedroomprogrammer is not suspended, they can still re-publish their posts from their dashboard.

Once unpublished, this post will become invisible to the public and only accessible to Arpit Dubey.

Thanks for keeping DEV Community safe. Here is what you can do to flag thebedroomprogrammer:

Unflagging thebedroomprogrammer will restore default visibility to their posts.