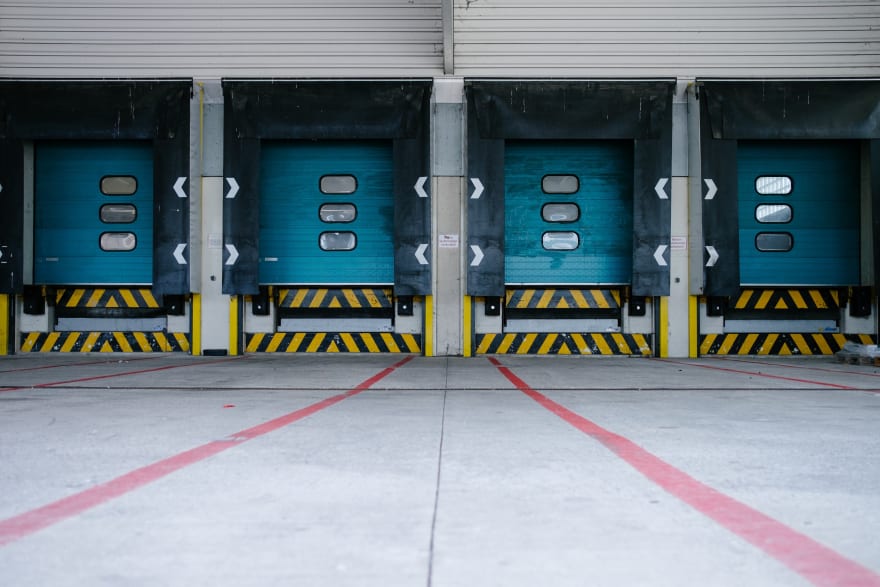 Hey, have you stumbled upon this post directly without reading the previous article because you searched for something and Google decided to teleport you here? Well, then I would suggest you read the previous article which is the first part of the 7 part series that I am writing.

Now, if you have read the previous article then let’s begin directly with this article.

With the introduction of a manager process, we will be able to create multiple stores and store key-values in them separately because guess what, we are not learning Elixir to just to deal with a single process.

Before beginning make sure you have Elixir and Mix installed in your system.

This command should create your project structure like this 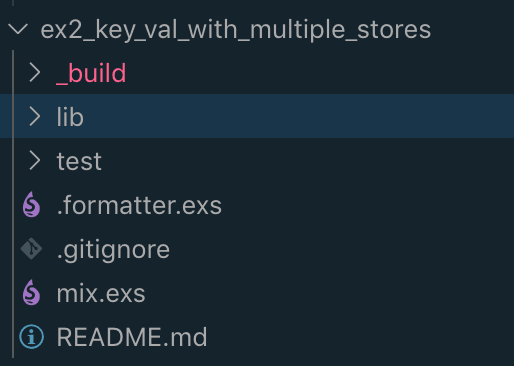 Delete all the files in the lib folder and create a file with name manager.ex and store.ex. Also copy the previously created server.ex in the same folder.

The reason why we are creating these many modules is that it is always good to decouple your code in the form of modules and functions wherever possible. It makes testing a lot easier and makes parts of your app to plug and play anywhere you want.

With the introduction of a manager process to manager multiple instances of stores we are looking to achieve an architecture like in the image below. 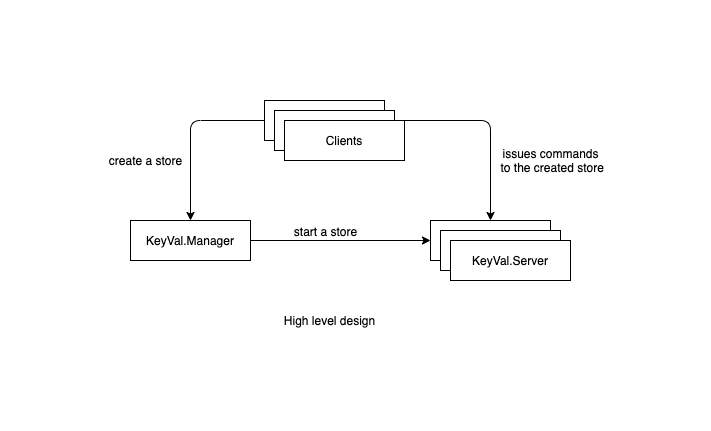 Show me some code 👨‍💻

Here we now have 3 entities to care about. 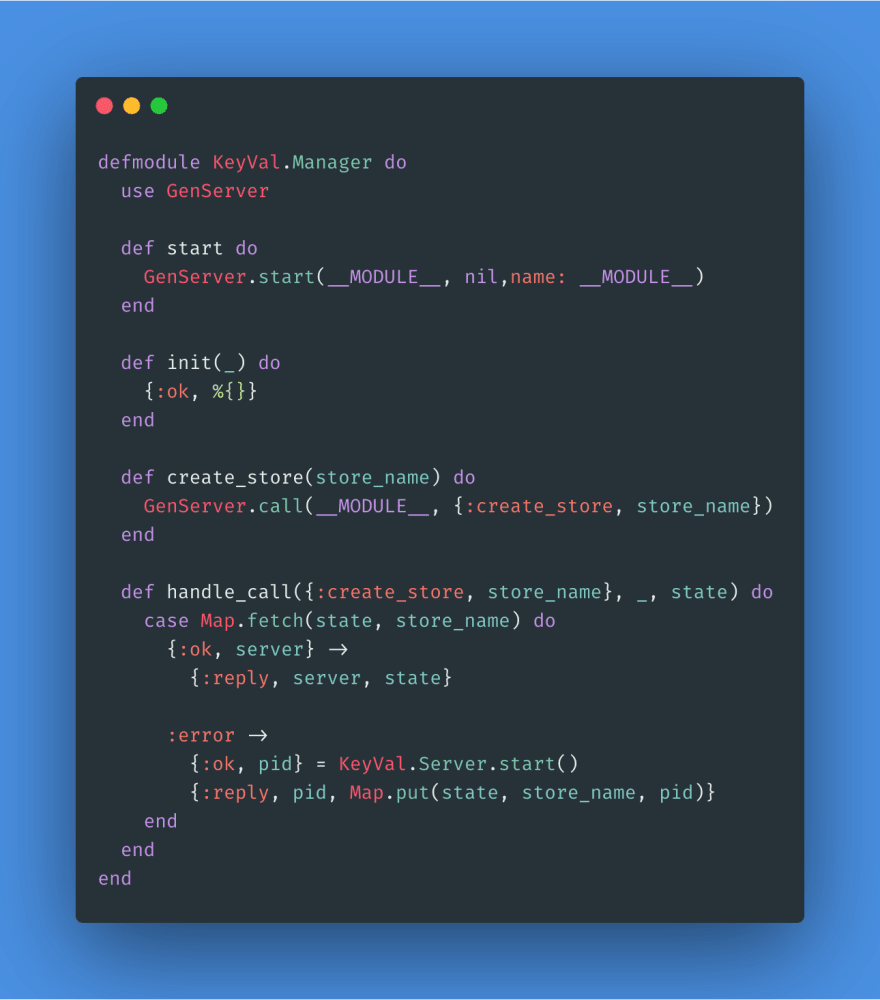 The Manager process is a GenServer whose task would be to create a store as a server process and maintain a map of stores created with their name and PID which the client would use to communicate.

In the Manager file we startup a GenServer and this time we pass an extra parameter of name: MODULE to it. This registers the GenServer’s name as it’s module name so we won’t be needing a PID to communicate to it. Since we are going to create only one Manager there would only be one Manager with that name.

The internal state of our Manager will store all the store related information in the form of Map with keys being the name of the store and values being their respective PIDs. 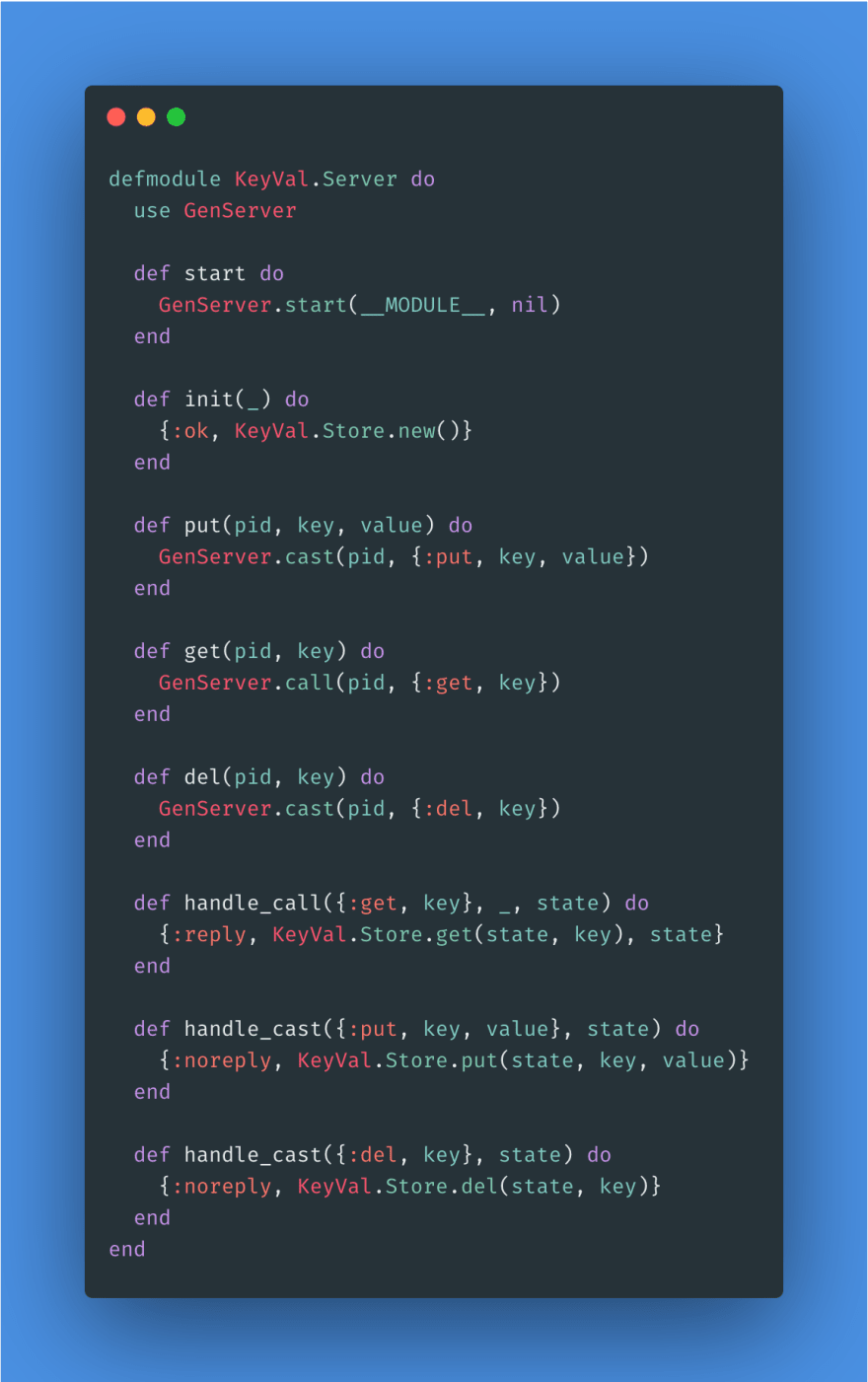 The Server is the simple GenServer that handle the task to manipulate the store values when the client issues a specific operation to it to perform.
The server code is the** same as before. It handles all the operations like **put, get and del but in a more abstracted way with the help of a Store module. 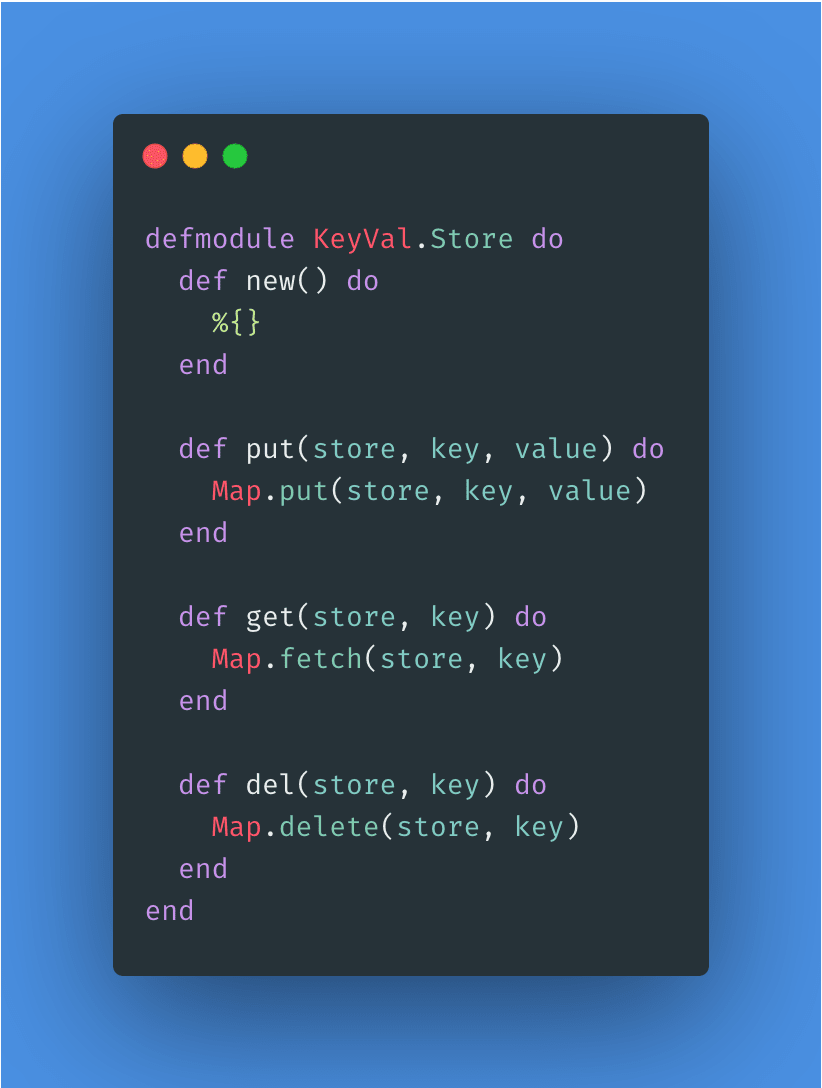 To promote code reuse we took out the Store operations in a different module called KeyVal.Store. This makes the app simple.

In order to start the whole system, we first initiate an elixir session
by typing 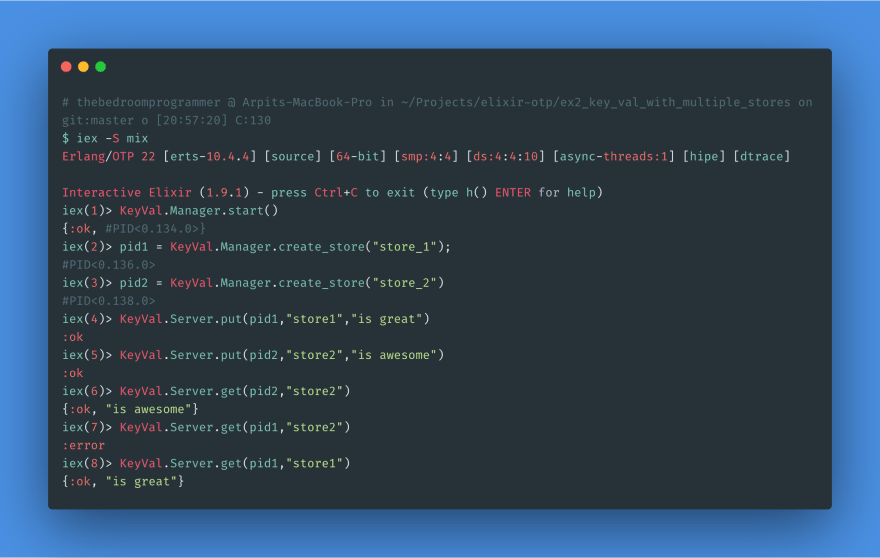 Now we start the Manager process with the startup command. After starting the manager process we create two stores with different names and store their PIDs in local variables.

Then we communicate to the servers with their respective PIDs to store, retrieve or delete values in the store. Since both the server processes are different the values stored in them are completely different. You won’t be able to query for a value stored in Server 1 using the PID od Server 2 since they do not share the stores.

So this is how you can Manager multiple stores using GenServers.

I hope this post has helped you get a little bit better understanding of the whole process.

The complete source code of all the parts are here.

Once suspended, thebedroomprogrammer will not be able to comment or publish posts until their suspension is removed.

Once unsuspended, thebedroomprogrammer will be able to comment and publish posts again.

Once unpublished, all posts by thebedroomprogrammer will become hidden and only accessible to themselves.

If thebedroomprogrammer is not suspended, they can still re-publish their posts from their dashboard.

Once unpublished, this post will become invisible to the public and only accessible to Arpit Dubey.

Thanks for keeping DEV Community safe. Here is what you can do to flag thebedroomprogrammer:

Unflagging thebedroomprogrammer will restore default visibility to their posts.