" In object-oriented programming, a class is an extensible program-code-template for creating objects, providing initial values for state (member variables) and implementations of behavior (member functions or methods). " - Wikipedia

In simpler words, Classes are the blueprints used to create objects.

Note: JavaScript objects are entities having properties and methods.

Let's understand Classes with the help of this example - 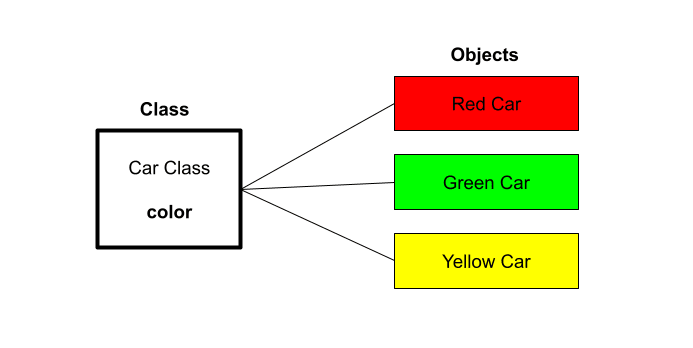 Classes are like templates. We can see that we have one Car class having a property color in the picture, but we have not specified which color.

With the help of this class, we can create different objects with specific colors, like if we pass red as a color parameter, then a red car is created( i.e., object with red color property).

What can we define with a Class definition? -

We have to use the class keyword to create a class, followed by a class name that conventionally starts with a capital letter, i.e., Person in the above code.

Every class has a constructor, and a constructor is basically a method that runs only once during the object's life, specifically when the object is being created.

The constructor is used to setup the object, i.e., to define the states of the object ( properties ).

this refers to the current object which is being created.

name refers to the property name.

personName is the argument passed while creating the object.

also, sayHi() is a method with some functionality.

Let's see how we create an object using a class -

Also, we have passed "Alok" as an argument to the constructor method while creating the object.

We have called the sayHi() method using person1.sayHi(), which runs the code inside the method and gives output Hi Alok.

In this example, we have created a rectangle1 object with arguments 4 and 5.

area() method uses these arguments stored in properties to find the area( length*breadth ) and return it.

Getters and Setters are basically used to define methods in a class and then used as if they are properties.

Let's understand these with an example -

To use a getter, we have to use the get keyword and then define the method, and we can call it as a property ( square1.area - notice we don't have () while calling the area method ).

While to use a setter, we use the set keyword and then define the method, and we call it by directly assigning the argument to it as we do in a property ( square1.area = 25 - notice we don't pass the argument here; instead assign it directly ).

Static methods are defined in the class but are not used by or part of the created object.

Or, in simple words, static methods don't require an instance of a class to be created in order to be used.

Let's understand this with an example -

A static method can be called directly using the class name ( i.e. Temp.isEqual() ).

As you can see above, we don't need to create an object to use the static method.

Also, we can pass objects while calling a static method.

Here you can see we have passed objects as arguments to a static method, which is called directly using the class name.

Then the method accesses each value property using objectName.value and returns the result.

With the help of inheritance, a class can extend another class. Or, in simpler words, one class can have access to methods of another class and also have its own methods.

Let's understand this with the help of this picture - 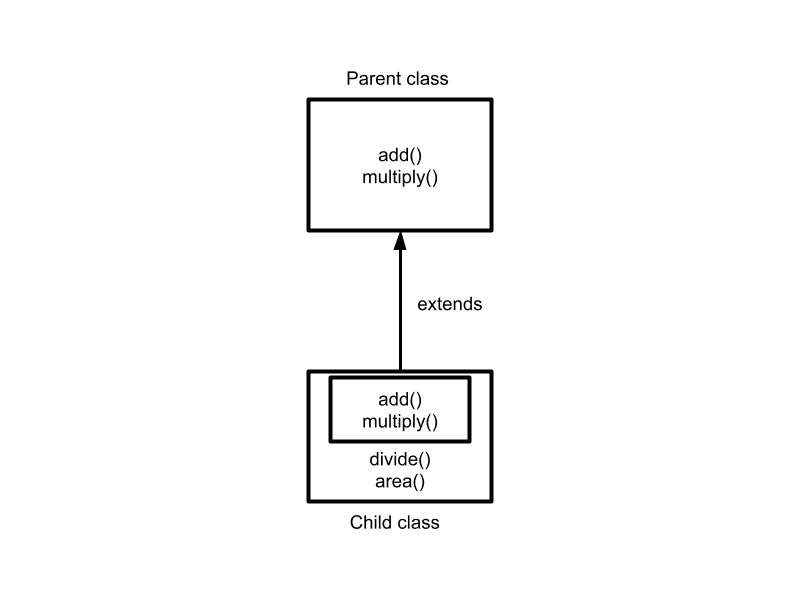 In the above picture, a Child class extends a Parent class. As we can see, the Child class has access to the methods of the Parent class ( i.e., add() and multiply() ); also, it has its own methods( i.e., divide() and area() ).

Let's understand inheritance with the help of an example.

Here we have a Person class that has a constructor taking arguments - name and age. Also, it has a method named sayHi() which basically console.log out "Hi!!! this is name and I'm age years old. ( name and age are arguments passed while creating an object ).

We have also created two objects person1 and programmer1, one each of the Person and Programmer Class.

Here you can see the programmer1 object has properties of Person class - name and age. Also, it’s own property - role.

Here we have called the sayHi() method using the object of the Person class.

Here we have called the info() method using the object of the Programmer class, and you can see it called and executed the sayHi() method of the Person class with arguments passed while creating the programmer1 object; also, it executed its own console.log out.

But we can't access the method of the Programmer class using the object of the Person class as the Parent class doesn't have access to the Child class.

Polymorphism allows us to override the method of the Parent Class.

Let's understand it with the help of an example -

Here both the Parent Class ( Animal ) and the Child Class ( Dog ) have the same method sayName().

And we have seen earlier that we can call a Parent class method using an object of a Child class, but in this case, both the methods have the same name.

Let's see what happens when we call them -

It works fine as it should; now, let's see what happens when we call the sayName() method using dog1 object -

And this is how Polymorphism allows overriding the Parent class method.

I have tried to keep it simple and precise, thanks for reading it till last, and also I have a lot planned for the future So stay tuned 🙂

If you find this useful then you can share it with others :)

Once suspended, thecoollearner will not be able to comment or publish posts until their suspension is removed.

Once unsuspended, thecoollearner will be able to comment and publish posts again.

Once unpublished, all posts by thecoollearner will become hidden and only accessible to themselves.

If thecoollearner is not suspended, they can still re-publish their posts from their dashboard.

Once unpublished, this post will become invisible to the public and only accessible to Alok Kumar.

Thanks for keeping DEV Community 👩‍💻👨‍💻 safe. Here is what you can do to flag thecoollearner:

Unflagging thecoollearner will restore default visibility to their posts.