Learning Data Structures and Algorithms is important for every developer regardless of whatever track you find yourself.

This article will teach you:

A programmer is first of all a problem solver, and most computing problems can only be solved using algorithms. As such, knowledge of algorithms is imperative for all programmers. However, in recent times, the majority of developers starting out in tech without a formal Computer Science educational background skip this fundamentally important step.

You must have come across new developers writing powerful code for server side, working with frameworks, but do not know how algorithmic problem solving with that language they use. Chances are that, this applies to you also.

Why You Should Learn Algorithms

Coming across a puzzle or problem requires you to come up with and implement a fast and memory-efficient algorithm to solve it. Hands-on problem solving of programming challenges will help you actualize a better understanding of various algorithms and may even land you a job since many high-tech companies ask entry-level developers to solve programming challenges during job interviews and internship applications.

The algorithm you write to solve that problem will be checked automatically against many carefully selected tests to verify that it always produces a correct answer and fits into the time and memory constraints.

It doesn't really matter what programming language you're starting out with because it is language agnostic. There is a problem in front of you and it has no regard whatever tool you're using, as long as you solve it. However, many senior developers are conversant with writing algorithms in C++. Other popular languages include:

This does not mean that other languages cannot be used. For example, the codes in this article are written in Golang.

Data Structures refers to the way data is arranged or represented. 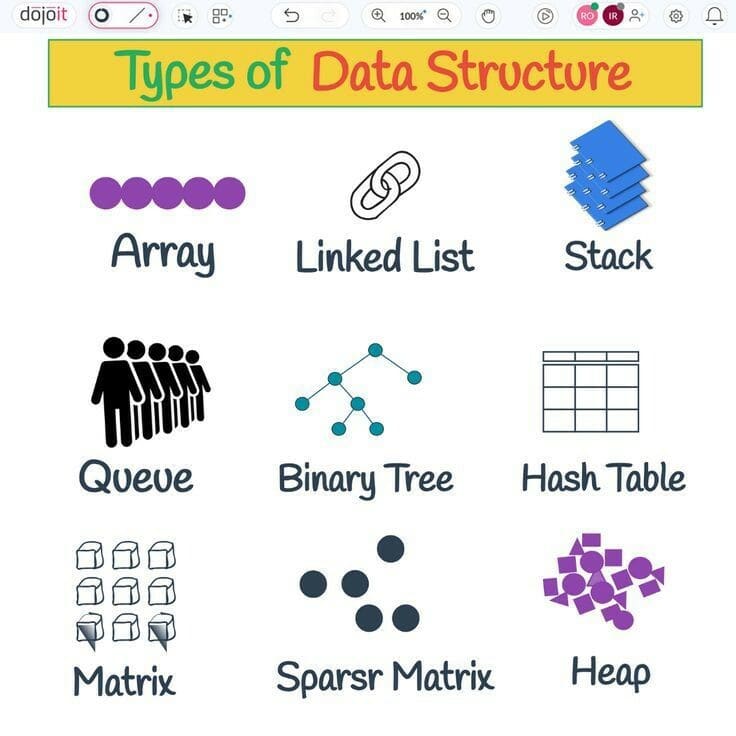 There are lots of data structures but they can be classified under six categories as seen below.

Under this category, lists, tuples and heaps are explained.

A list is a connected sequence of elements. It is similar to an array, but its normally easier to add or delete elements in a list.

In Go, lists are created from the container/list package, which has a PushBack method for appending elements. For example:

After running go filename.go the console should print the values of separate lines.

A heap is a data structure that can be expressed as a complete tree but is actually an array. To help your understanding, think of an array containing 11 elements. Now break this array into a binary heap such that it looks like a tree with one root on the top and two nodes branching from that root. Now treat these two nodes as roots, then branch out two sub nodes from them. A max heap has the biggest element in the array as the main root, while a min heap has the smallest element or key as the main root.

Heaps are mainly used in selection, graph, and k-way merge algorithms. Operations such as finding, merging, insertion, key changes, and deleting are performed on heaps. Heaps are part of the container/heap package in Go.

The code below seeks to explain insertion and extraction in Go:

The console prints out three lines, each an update of the array:

This is an example of a max heap in Go where the algorithm updates each new iteration by putting biggest numbers first.

A tuple is a finite sorted list of elements. It is a data structure that groups data. For example, let's find the exponential of an integer and then return it as a tuple:

After running go filename.go the results are going to print the following in the console:

To explain how algorithms are written using day to day terms, let's assume you were building a SaaS.

In simpler terms, you should understand algorithms to be computational procedures in solving a problem. It is also important for algorithms to not be falsifiable when analysed for any case. Algorithmic analysis is represented generally in three cases:

Types of Algorithms with Examples

Running go filename.go gives the following results in the console:

There are classical algorithms in every programming language. To save time, we are going to treat a limited number of examples. These include:

Sorting algorithms arrange the elements in a collection in ascending or descending order.

The bubble sort algorithm is a sorting algorithm that compares a pair of neighboring elements and swaps them if they are in the wrong order.

The bubbleSorter function takes an integer array and then sorts the elements into ascending order.
Running go filename.go gives the result:

Where To Go From Here

Next you should start implementing algorithms in whatever codebase you think it'd fit perfectly.

Furthermore, you should be more confident of your next technical assessment!

I am MacBobby Chibuzor, a contract Technical Writer at Wevolver and Golang Developer. Follow me for more articles related to Golang, Machine Learning, IoT, Data Structures and Algorithms, Web Development and Security Testing

Getting to know mermaid JS