Over the last several years, the increasing popularity of component-based architecture for web development massively changed the way developers built user interfaces. This model moved away from the more traditional MVC approach to UI development by chunking up interfaces into (you guessed it) components!

The way CBA (Component-Based Architecture) works is to separate the parts of your interface into their own independent components, putting an emphasis on reusability and single-responsibility. An interface can consist of different types of components: from simple "leaf" components like buttons or inputs, to more complex compound components such as a log-in form, which itself consists of a number of other components.

In this way entire features like app views can be defined as their own components, while consuming and reusing simpler components. 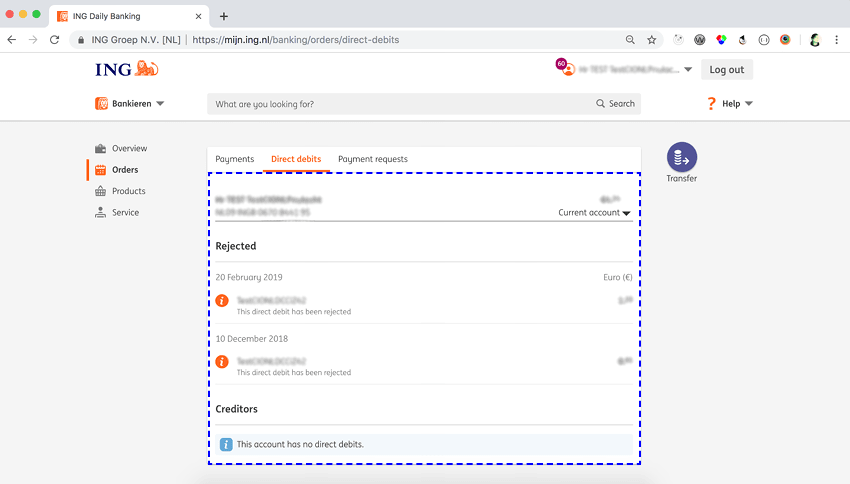 So how exactly do Web Components play into this?
Web Components are a set of unified web standards that allow us to write the kinds of components we've been discussing in a way that should work across browsers and frameworks.

Historically, there were a few attempts of standardizing a component model in the past, like Microsoft's HTML Components (HTC) in 1998 and Mozilla's XML Binding Language (XBL) in 2001. The first public draft, called Web Components v0 for the modern Web Components standards was published in 2012. In 2014, Chrome and Opera added support for the v0 spec. In 2016, the v1 spec was published, reflecting the consensus reached among browser vendors over the features and APIs of web components.

So let's take a look at the standards that allow us to write Web Components:

The Custom Elements specification enables us to define and use new types of DOM elements in a document. We're basically telling the browser, "Hi browser 👋, here's a new kind of HTML element, and here's what to do with it!".

The v0 web components specification provided HTML Imports as the standard way to publish components and import them into our projects. Sadly, that specification failed to gain traction among browser vendors, so it was deprecated.

Meanwhile, JavaScript Modules were standardized and implemented across browsers. Since they provide browser-native to share reusable and self-contained bits of code, it was a natural fit for web components.

The HTML Templates specification lets us write reusable chunks of DOM. A HTML Template is a content fragment, and it's contents will not be processed by the parser untill we tell it to.

Shadow DOM allows us to encapsulate the markup and styles in our Web Components; anything inside a shadowRoot will not be affected or overwritten by styling from outside, and none of our styling will leak outside our components.

With Edge announcing their intent to adopt the Chromium engine, soon all major browsers will natively support Web Components 🎉.

Fortunately, Web Components are fully polyfill-able, which allows us to achieve backward compatibility for older browsers that don't natively support Web Components, such as Internet Explorer. This can, however, make polyfilled browsers performance slower.

Alright, enough talk of standards and specifications, time to get our hands dirty and look at some code!

Here's an example of how we could write a very simple Web Component: 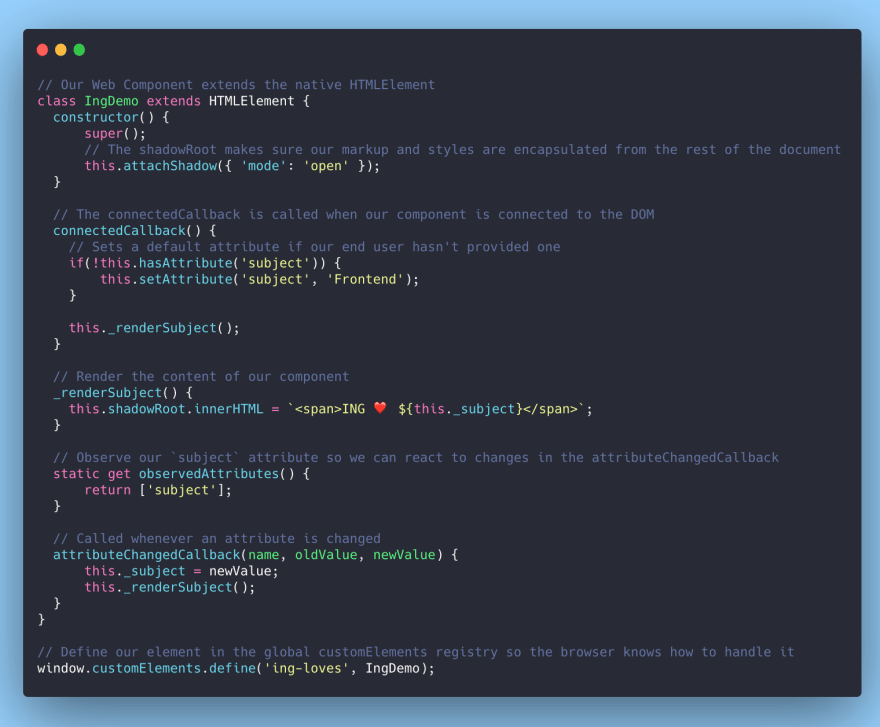 We can now simply use our component like so:

And it'll show up in the DOM as:

A common misconception about Web Components is that they can only take string attributes to pass down data. While it is true that attributes can only be strings as a limitation of the HTML specification, fortunately, we can simply implement getters and setters if we want to pass down some rich data like objects and arrays like so: 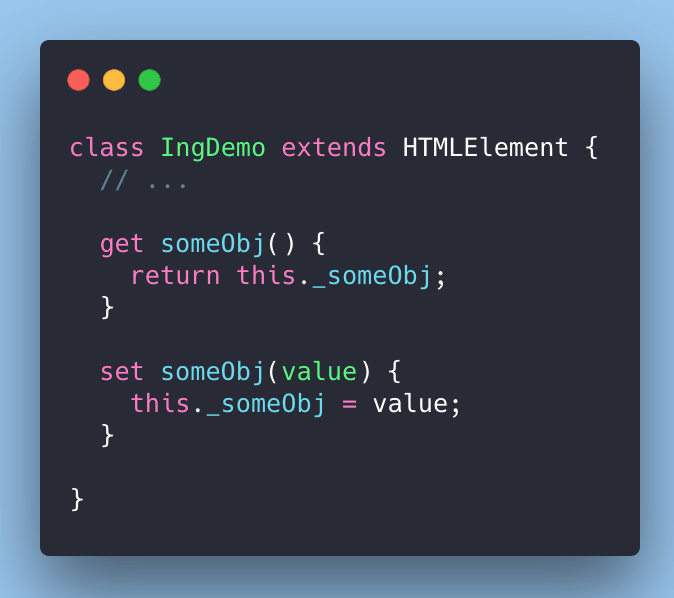 And we can then set the property using javascript:

Excellent, we now have a fully functioning Web Component! And what's great about this is that this code will run in any* modern browser, you can copy and paste this code into your browser's console, add the <ing-demo> tag to your HTML, and it'll work! More so, we can now consistently use the same component across all of our applications.

What's less great about this is, is that writing code like this will very quickly become tedious, hard to read, and hard to maintain. Imagine if we have a component that has 10 possible properties. We'd have to write 10 getters, 10 setters, and what if we want to reflect our properties to attributes as well? That's going to be a bunch of work, and a whole lot of boiler plate code. Web Components are low level by design, and intended as a collection of standards that do very specific things that the platform didn't allow yet. So that means we might need some type of abstraction that makes all this easier for us, and this is exactly why:

Now that the standards have matured, it has become much easier to develop Web Components, and many libraries and frameworks now support both the creation and consumption of Web Components, such as:

If you're interested in using Web Components in your favourite framework, you can visit custom-elements-everywhere. Most frameworks* support the consumption of Web Components without any hiccups.

* Sadly, React requires a few extra steps to make Web Components work, since it cannot listen for DOM events coming from Custom Elements without the use of a workaround, and will pass data exclusively in the form of attributes, and not properties.

At ING, we ❤️ to use the Polymer Classic library and the new LitElement and lit-html libraries for developing our Web Components. Let's take a look at how we would rewrite our <ing-loves> component using LitElement: 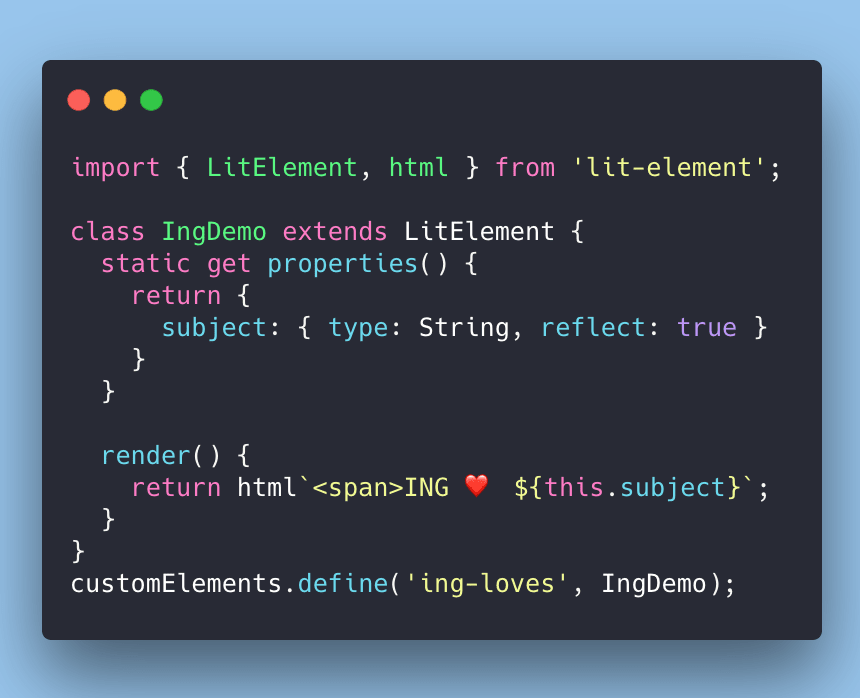 LitElement's static properties getter makes it incredibly easy to manage both our properties and attributes, and makes it easy to declaratively render our HTML. More so, we just went down from 35 lines of code in our original example, to a measly 14 lines of code.

Some time ago, we experienced a similar type of problem where the Custom Elements polyfill didn't play nicely with the LastPass browser extension. This lead to users being unable to use the LastPass extension to log in to our banking application.

Web Components have *almost* been adopted in every major browser, but that certainly doesn't mean the end of it. There are many more exciting specifications and features to be added that will only increase the benefits of using Web Components. Here's a short list of what to look forward to in the future:

A valid criticism against Web Components is that Custom Elements are defined in a global registry, which could cause name collisions and all kinds of trouble. Scoped Custom Element Definitions allow the ability to construct CustomElementRegistry's, and use a given Shadow Root as a scope for those definitions, making it easy to avoid name-clashes.

Shadow DOM is great for encapsulating our styles and markup, and protect it from being overwritten by any outside styling. But... what if we actually want to overwrite some styles? The CSS Shadow Parts specification allows us to style purposely exposed elements in a shadow root from outside of the Web Component.

And many, many more great additions are being added to a browser near you! Some honorable mentions: Template Instantiation, HTML and CSS Modules, and Constructable Style Sheets.

That'll be all from me for this blog post, I'd like to thank you for reading, and if you have any questions about Web Components, or if you have any feedback, criticism or questions, feel free to reach out on Twitter. I'd also like to thank Benny Powers from Forter for taking the time to review and his helpful comments and feedback ✌.

If you're interested in a more technical and hands on blogpost on Web Components, you can check out:

Once suspended, thepassle will not be able to comment or publish posts until their suspension is removed.

Once unsuspended, thepassle will be able to comment and publish posts again.

Once unpublished, all posts by thepassle will become hidden and only accessible to themselves.

If thepassle is not suspended, they can still re-publish their posts from their dashboard.

Once unpublished, this post will become invisible to the public and only accessible to Pascal Schilp.

Thanks for keeping DEV Community 👩‍💻👨‍💻 safe. Here is what you can do to flag thepassle:

Unflagging thepassle will restore default visibility to their posts.