screen, or GNU screen, is a terminal multiplexer. It allows to manage multiple terminal sessions within the same console. In a way, it does the same thing as modern terminal emulators such as Terminator or Terminology with their built-in tab system and layout management. The main benefit is that screen also works through an SSH connection: you will be able to use your screen knowledge and configuration on any machine supporting screen in the world!

screen has been around for almost 30 years so it's pretty stable now. It is released under the GPL license.

The main issue I had when starting with screen was its relative difficulty when compared to simple terminal emulators. So I will make a tour of the most useful keyboard shortcuts for a practical use, and share with you my screen config. You can also jump directly to the cheatsheet if you want.

screen is not installed by default, so you need to install it first using your package manager.

To start screen, open a terminal and run the command screen. Not that hard, is it?

Now you have opened screen, the first thing you need to know is how to create a new "window" (i.e. a new virtual terminal). To do so, press the keys Ctrl+a, and then press c. The screen shortcuts all consist of Ctrl+a (called "escape key" or "prefix") followed by another key. You now have two windows opened running in parallel, you can have vim in the first one, and a bash in the second one for example, and that's what screen is all about.

You can visualize all the opened windows with Ctrl+a ". This view allows you to navigate through your windows with the arrow keys, the 0-9 numbers and the enter key. This command is great because it gives you a global overview of your current session, I used it a lot at first.

But there are more ways to navigate through the windows! I personally use almost exclusively the commands Ctrl+a p (previous window) and Ctrl + a n (next window). These shortcuts require to have your windows in mind though, but it comes with practice. And don't forget Ctrl+a " is here to rescue you in case of doubt. ;)

It's also possible to jump to another window with the command Ctrl+a number, where number is a number between 0 and 9. This matches the "Num" column of the Ctrl+a " view.

Finally, you can kill a window when you have no use for it anymore. To do so, just press Ctrl+d in the shell. There's also a screen command with the "same" effect but it's usually better to proceed this way. Note if you kill all the windows of a session, the session terminates.

Now you can manage your windows, it is time you learn how to manage your screen sessions.

The first thing I'll ask you to do is to kill your current screen session if you haven't done it already. You can then list all your screen sessions by running the command screen -ls. If all your sessions are closed, it should print something like:

Since you're connected to the session, it's presented as attached.

Now you're connected to a session named "my_session", you can detach it from the current terminal with the command Ctrl+a d. This should result in a message like:

As usual, you can list the currently running sessions with screen -ls. This time, "my_session" should be listed as detached:

I suggest you start and detach a few screen sessions to understand how it works. Be careful not to use the same session name twice, screen allows it but it can be more painful to resume a session if there are name conflicts.

With multiple screen sessions, the screen -ls gives something like:

A last useful thing you should know is how to kill a detached session without connecting to it. To do so, the command to run is a bit tricky: screen -S session_name -X quit. This means you pass the command "quit" to the session named "session_name". It's a bit hard to remember so I generally simply resume my session and kill all its windows one by one.

The hardest part is over! You have discovered screen and you know how to use it. All you need now is practice.

In this section, I'll present a few interesting features of screen, but they're definitely not necessary to use it, so feel free to come back and read this part later.

In the introduction, I talked about how Terminator and Terminology can work as layout managers. The good news is screen also permits to do that. So to split horizontally, you can use the command Ctrl+a S, and to split vertically you can use Ctrl+a |.

To switch to the next region (this is how the split panes are called), the command to use is Ctrl+a <Tab>. Each region behaves normally: you can run any command you have learned so far.

To close the current region, use Ctrl+a X. If you work with a lot of panes, you can close them all but the current one with Ctrl+a Q.

Work with the buffer

To follow, I'll talk about an important feature of screen: the copy mode, or scrollback mode.

To enter the copy mode, the command is either Ctrl+a <Esc> or Ctrl+a [, choose your side. The copy mode allows you to navigate through the console buffer without using your mouse. Since you can't use your wheel to scroll by default, this is the normal way to go back in the results. This mode lets you use some vim commands for the movements (arrow keys, 0, $, g, G, etc.).

You can copy some text (that's what the mode is for!) by marking the beginning and the end of a section with the space bar. You can then paste it with Ctrl+a ]. For more informations, check the man screen and look for "copy".

I'll finish with a last screen feature I want you to know about: it allows to share a session between multiple users. When working on a remote server, this comes really handy.

Then to add a specific user to the session, enter the command mode again with Ctrl+a : and type the command acladd username (ACL stands for "Access Control List") with the name of the user you want to add instead of username.

The user username is now able to join your session simply with the command screen -x your_username/session_name. The session is completely shared, which means you can see what the other users do in real time and so can they.

When a session is shared with multiple users, it can be nice to know who is currently connected on it. You can have this info and more thanks to the command Ctrl+a *. The view shows a few useful informations, namely the window a user is currently using, or their permissions.

Finally, you can revoke the access rights of user with the command acldel username in command mode. There's more you can do to manage a shared session, but I won't go into details, the man page covers everything. Now you have a basic understanding of screen, it should be easier to understand.

When I start my terminal, I like it to list the current screen sessions. To do so, I simply added the screen -ls command to my .bashrc. So now whenever I open a terminal, I'm welcomed with my screen status:

Not only is it really useful to have this status without asking for it, but it is also a good way to think about always using screen.

As you're now aware, screen uses a lot of options. I tried to keep only the most useful in this article but they're still a pain to remember. A good way to remember them is to use aliases. I personally use the following:

These aliases don't conflict with anything standard and they're really easier to remember and to type, so I strongly advise you to use them!

screen can be customized in various ways through a .screenrc file, located in your home folder. One of the most useful tricks is the status bar. 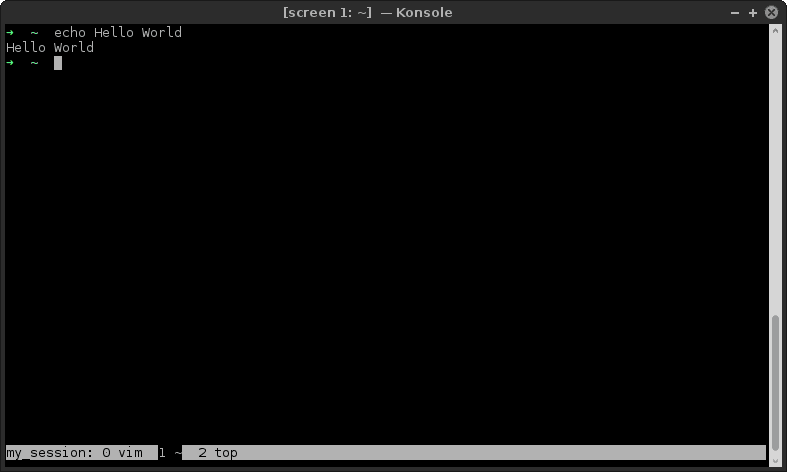 I won't go through the configuration of screen in details (you can read man screen or other articles to learn more), but simply share my commented .screenrc with you:

Note you can enable any of these options directly from screen's command mode.

Cheatsheet of the main commands

screen is a powerful tool if you use the terminal a lot. Yet, it has some drawbacks, that can be pretty annoying. To list a few you will be confronted to if you really try to use it:

Good news though, all these issues are allegedly solved with tmux, another more recent terminal mutiplexer. I've only used it as a replacement of screen for a few days so I will wait a bit before reviewing it, but it's very similar to screen in its usage, and I'm very satisfied with it so far.

TIDBIT: get direnv to use .env

How to Kill a Process Running on a Port

Two things that make my Terminal experience awesome 🚀 in Mac/Linux

Once suspended, thiht will not be able to comment or publish posts until their suspension is removed.

Once unsuspended, thiht will be able to comment and publish posts again.

Once unpublished, all posts by thiht will become hidden and only accessible to themselves.

If thiht is not suspended, they can still re-publish their posts from their dashboard.

Once unpublished, this post will become invisible to the public and only accessible to Thibaut Rousseau.

Thanks for keeping DEV Community 👩‍💻👨‍💻 safe. Here is what you can do to flag thiht:

Unflagging thiht will restore default visibility to their posts.